Review: Hooktheory Book II, "the next level of chords and melodies" 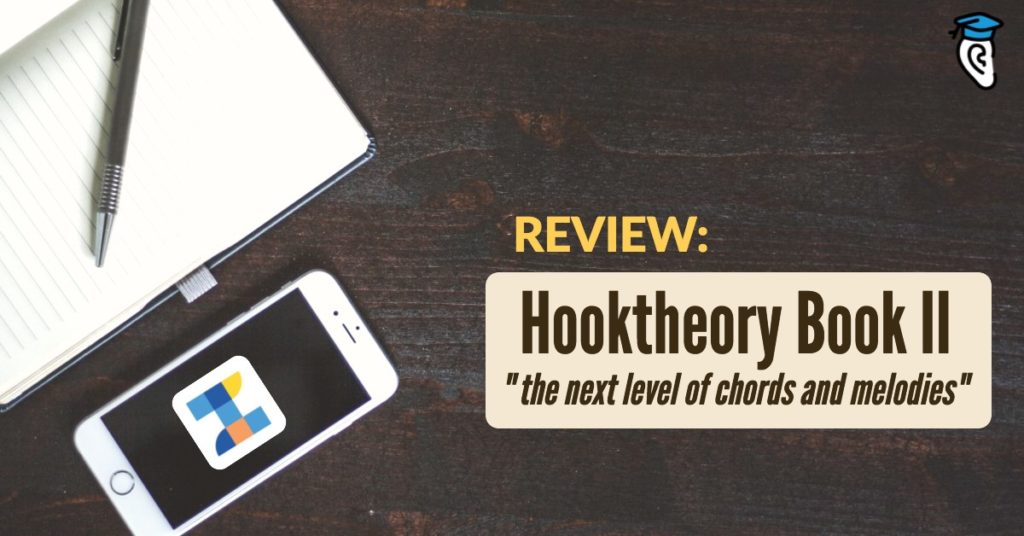 For many musicians, just getting a handle on recognising common chord progressions by ear and starting to write songs is enough. But what about once you master that? Where do you go to learn advanced song-writing techniques, alternative harmonies, and the tricks which real songs use to break away from the tried-and-true and create something more unusual?

At Easy Ear Training and Musical U we teach that there are three essential areas for musicians to study: instrument, music theory, and listening skills. Ignore any one of those three and you’ll be held back from your true potential enjoyment and creativity in music.

In particular, a lot of musicians ignore music theory, thinking it’s a boring topic unrelated to “real” music. Of course, nothing could be further from the truth: theory underpins each and every piece of music we write, play and love.

That’s why we love companies like Hooktheory which manage to teach the normally-dry subject of music theory in a way which brings it to vivid life, connecting up with the real world of music and ear training to give the theory meaning.

We previously covered the Hooktheory website and Hooktheory Book I, giving both an enthusiastic thumbs-up as highly valuable resources for the modern music learner who seeks to understand what makes the music they hear each day tick.

The most recent release from the Hooktheory team is Hooktheory Book II which picks up where Book I left off, and further equips you to write or understand songs using all the modern techniques of popular music, in particular focusing on chords and chord progressions. 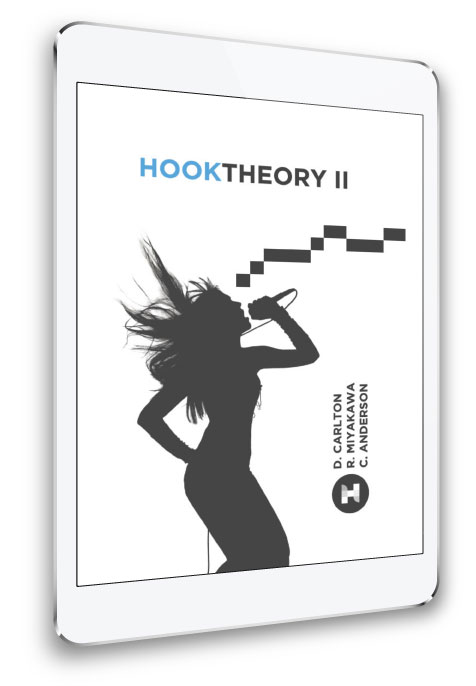 “Hooktheory I and Hooktheory II were created to teach you how to craft melodies and chord progressions like professional musicians, and gain a deep understanding and intuition for how music works.

Hooktheory I introduced you to Roman numerals and scale degrees, and laid the groundwork for arranging chords and melody into something that sounds great. But Hooktheory I really only scratched the surface of what is musically possible.”

As I mentioned in my review of Book I, it actually covers a great deal of material, and if you’re just starting out with music theory or song-writing, there is plenty to keep you busy there for weeks, or even months. However, if you feel like you’ve mastered the Book I material and are itching for more, or you’ve come across particular advanced topics and want the Hooktheory explanation, then Book II has you covered.

Book II takes exactly the same approach as Book I in terms of what it is (a modern “book” available on the web or as a mobile app for iOS and Android) and how it teaches (written text with plenty of graphical and video examples, plus simple question-and-answer tests along the way). It covers the more advanced topics in song writing, and I think it’s fair to say that if you master what Book II teaches you will be light-years ahead of most professional musicians and even professional song writers in your understanding of the theory of chord progressions in songs.

The book begins in chapter 1 by introducing seventh chords as “an easy way to raise the level of sophistication of your music”. There’s a nice listening exercise comparing triad chords with their seventh-chord equivalent, then several real song examples. It explains how major, minor, dominant and half-diminished seventh chords are built and the use of V7, then ii7, iii7, vi7 and major sevenths (and their inversions) in song writing. As with Book I there are plenty of song examples from 20th Century popular music.

In chapter 2 the secondary chords are introduced, as using notes outside the scale to add an “interesting, unfamiliar sound to your song”. These are explained in terms of shifting “home base” with e.g. the “V of V“, then the “V of IV” and “V of vi“. In each case you learn how those chords are found from the context of the original tonal base and then how they are commonly used by song writers. The chapter also covers inversions of secondary chords and some less common ones.

Next it’s the chapter that jazz fans and guitarists have been waiting for! Under a title of “embellishments” the book covers extended chords (9ths, 11ths, 13ths), the add9 chord, and suspended chords like sus4.

At this point you might be feeling a bit saturated on all the possible chord types and their uses, so chapter 4 is a welcome diversion, focusing on creative techniques: how to use all these ideas effectively when writing a song. Specifically it discusses controlling the energy level of a song through harmony, and the vital concept of deception i.e. playing with the listener’s expectations.

This is a particularly great match for Hooktheory since so much of the material is demonstrating the common ways of doing things. It means you have plenty of ammunition for playing with “the normal way” and then defying expectations.

The chapter rounds off by discussing the effects you can have by adjusting how big a set of chords you use in each section of a song. 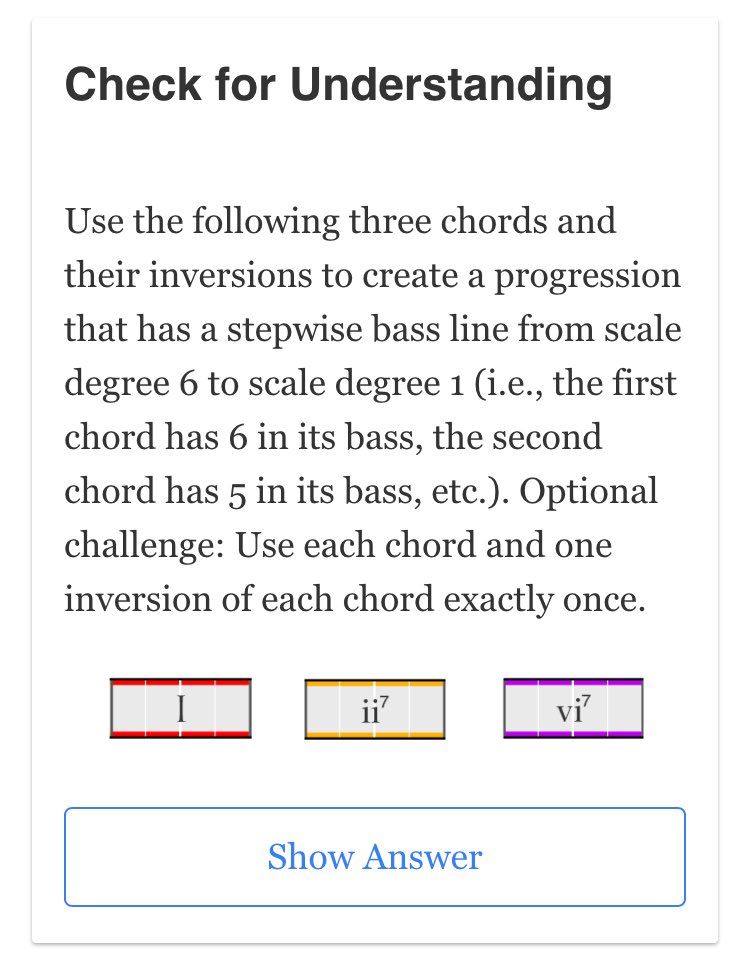 One topic conspicuously absent from Book I was minor keys. For all the discussion of chord progressions, little was said about how it all works if the song’s actually in a minor key. I actually agree with this choice of sequencing: there’s plenty for the student to learn about major keys alone, and given the predominance of major keys in popular music, it makes sense to defer discussion of the minor until the student is well acquainted with how things “normally” go.

Book II picks up this topic, covering minor keys in chapter 5, starting off with how minor keys work and the chords built from their scale, then comparing major and minor key chord progressions to find what they have in common and their differences. It also explains the concept of a relative minor.

This is taken a step further in chapter 6 which covers modes. Building on the concept of relative major and minor, it introduces the idea of scales built from any major scale degree and the “borrowed” chords which result. Then two modes are covered in depth, the Dorian and Mixolydian, with a wealth of song examples and explanations for writing songs (including melodies) in these modes. The chapter rounds off with briefer coverage of the other three modes.

As with Book I, I came away thoroughly impressed. Although there is plenty of music theory not covered by either Book I or Book II, I think for all practical purposes these books cover everything that 95% of modern musicians or song writers need to know about harmony. To reiterate what I said earlier: master these two books and you’ll be light-years ahead of where most music theory courses leave you.

The only downsides to this innovative music theory “book” are the same as Book I, and they are all minor – pun intended! I will briefly mention them below and refer you to the Book I review for more information. If you enjoyed Book I you won’t have any concern about these “Cons”.

As with Book I, the strengths of Hooktheory Book II far outweigh the small critiques I might have.

This isn’t a book for everyone: you’ll want to have understood most of the material in Book I first, and even then you might choose to skip some of the more detailed sections on chord inversions and the less-commonly-used chords. If you’re a budding song writer then you’ll know there is also plenty of non-harmony material to be learned, such as lyrics, instrumentation and arrangement, recording and production, and so on. But that’s to be expected, and most musicians will be able to judge accurately whether they’re ready for Hooktheory Book II or not.

If you read through the description of contents above and thought “Oooh, I’d love to learn more about that” then Book II is going to be a real treat for you.

As with the first book, I can honestly say that this would have been very valuable to me if it had been available years earlier. In fact, having taken a theory course at a world-renowned music college which taught some of this material far less effectively, I really feel strongly that I wish I’d had it earlier!

If you enjoyed Book I and wanted more then Book II will not disappoint. And if you looked at Book I and thought it seemed too basic for you, then Book II almost certainly has some material to move you to the next level. This is a way of teaching music theory that keeps you engaged and excited to understand more, and I highly recommend it.