Home » Podcast » Q&A: If playing music is like speaking a language – what about harmony?

Q&A: If playing music is like speaking a language – what about harmony? 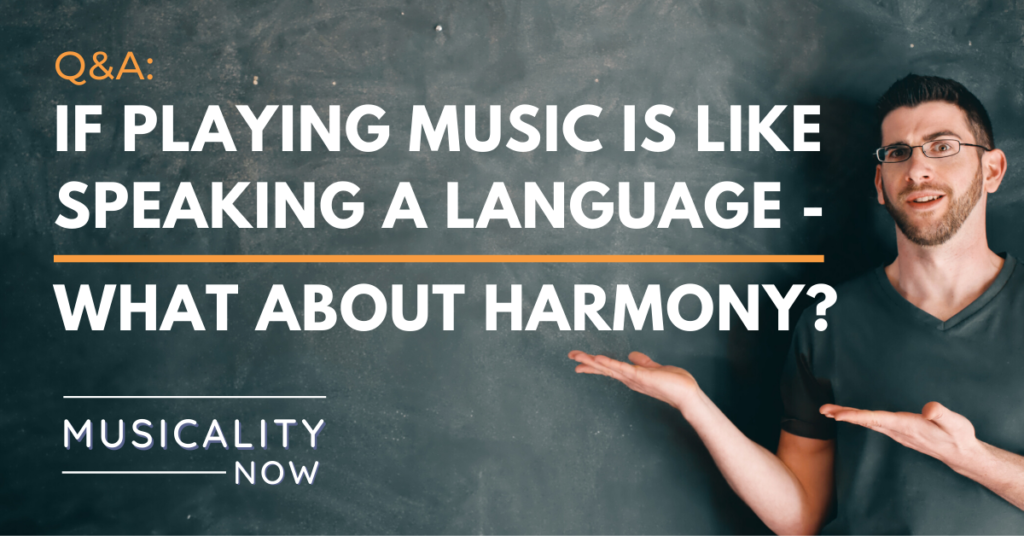 If playing music is like speaking a language, how should we think about harmony, or playing two hands on piano?

Learn the answers in this clip from the archive of live member Q&A calls at Musical U. Enjoy!

So the first question, the one I mentioned was just quite interesting, was when I had come in via a private message earlier this month. So I won’t say who it was asking because they chose to make it a private message rather than a discussion. But it was one of our pianist members on Musical U and they were asking a slightly unusual question, which is music is a lot like language, so we often use this analogy that learning music is like learning a new foreign language, or that playing music is a bit like speaking a language. But this member was wondering, that’s all well and good, but what about when you have harmonies? What if I’m playing piano and I have my left hand and my right hand, how does that relate to speaking a language? Because obviously you can’t speak two languages at once.

And I had to think about this before answering because it is a slightly thought-provoking question. And in the end, what I came down to was that language is an analogy we use for music. It’s a useful analogy. It can help us understand some concepts, but it’s not a perfect analogy. Music is its own creative art form, and I think we all know it’s not as straightforward as speaking a language. It’s not as simple, maybe, as speaking a language. And so we can’t always expect that analogy to be perfect, but there are a couple of ways we can think about this particular question of how does harmony relate to music as a language.

So one way to think about it is that harmony, the obvious analogy is we have multiple people talking at the same time. So just like you have your left hand and your right hand on piano, or you might have a guitar player and the bassist combining their sounds for a harmony that matches. Language can be a bit like multiple people all speaking, and if they aren’t coordinated, which would be like if we had musicians not playing in the same key, for example, or playing from completely different scales, or not being in sync with their rhythm, it would be a hopeless jumble. If you have five conversations going on around you, it can be quite hard to tune into any one of them. Or if you have two people asking you a question at once, you have to really pay attention to answer one and then the other, and you can’t answer them both at once.

So when people are speaking at the same time and it’s not coordinated, it makes a big mess, and the same is true in music. That said, if people are coordinated, we know from music that that works. When we talk about harmony, what we normally mean is multiple voices contributing to something that works, something that’s greater than the sum of its parts. And the same can be true of language. So if you think about a crowd who are chanting a slogan, if they’re at a protest rally saying, “Down with the something something,” or a crowd of football fans at a match saying, “Come on Arsenal,” and they’re all chanting at the same time, and they’re chanting the same thing, that’s very analogous to music. So it’s almost like they’re chanting in key whether or not they’re speaking at the same note. And they certainly are aligned in their rhythm. And so we can see there even in language, there is the opportunity for a form of harmony or a form of working together like that. So that’s one way you can think about it, that your left and right hands are kind of working together and coordinating, even though they might be saying different things.

The other way to think about it, which is a slightly more heavyweight analogy, is that actually when we speak a language, it’s true that we can only say one thing at a time. We can only speak a certain sentence, and we can’t say two sentences at once, but actually that’s not the only way we communicate. So if we’re communicating with someone there’s also our facial expressions, there’s gestures, like I just inadvertently made with my hand. We move our bodies, we move our faces in particular. And that communicates as well as the speech. And if anyone who has studied body language knows that the amount of information you can receive from someone through their speech and their body language can be much greater than the speech alone. And you know, we all have an instinct for this. When we speak on the phone, we’re conscious that we don’t always quite understand someone as well as if we saw them in person. There are also situations where you kind of can tell from someone’s body language or facial expression that they don’t quite mean what they’re saying, or they’re saying something, but they mean it as a joke. Which doesn’t necessarily come across on the phone when you only have the voice.

And so that’s, in a way, analogous to harmony and music in that we are communicating with someone in multiple ways at the same time, even though only one of them is speech. So that’s maybe a bit more analogous to singing and playing guitar at the same time. But that is an example of harmony. And it’s maybe less clear-cut to see that your left and right hand on piano is a bit like that. But if you held up a written message on a piece of paper and you showed someone the message while speaking to them, you could be saying two completely different things at the same time. And you could, if you wanted to, coordinate those in a harmonic way. So I thought that was quite an interesting question because we do so often turn to this analogy of language for music. And it can be helpful and thought-provoking to think about that, and to think about where are they comparable, and where actually does that analogy break down, and what can we learn about music from thinking about that?