Home » Podcast » Q&A: How (and why) should you do ear training for scales?

Q&A: How (and why) should you do ear training for scales? 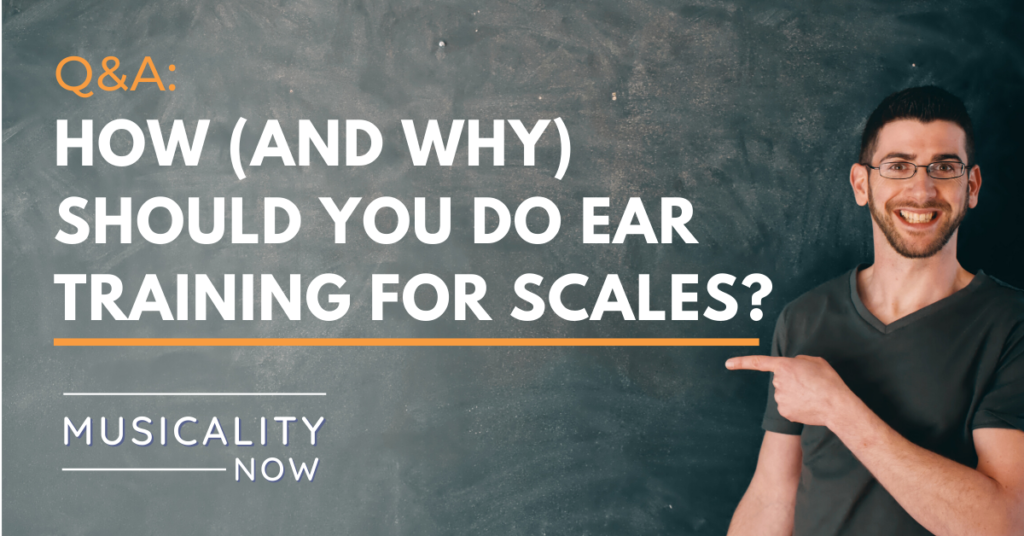 Scales… Most music learners think scales are just an exercise you’ve got to do as part of learning your instrument. But did you know there’s actually a whole area of ear training dedicated to scales?

In fact there are two! In this clip from the archive of live member Q&A calls at Musical U we talk about these two types of scale ear training and how each can help you.

If you want to get more out of scales and ear training, don’t miss this episode.

Stewart was pointing out that some people have been asking about scales. Maybe I’ll just give a quick explanation of how we view scales inside Musical U because it’s maybe not the typical approach which hopefully is a good thing. We talked in the previous call about how to make it interesting to practice scales. This is because if you’re learning an instrument, scales are probably a big part of your life particularly if you’re learning in the traditional semi-classical approach like ABRSM or the Trinity Exam Board. Every exam, you have a set of scales to learn and your teacher is probably drilling you on your scale practice and they are valuable for sure particularly for that instrument technique.

But when it comes to the inner skills of music, the stuff we focus on at Musical U, it becomes a bit more confusing. People aren’t always sure what they should be doing for scale ear training for example, what they aren’t sure how to bring the theory of scales to life and how to make use of those instruments skills they’ve been learning. If you found yourself in that boat, let me just briefly explain why scales are useful, in terms of listening skills and how we approach it at Musical U so that you can get the benefit of those training modules. Scales are useful as a framework. This is what’s often lost in the instrumental approach to scales where you use them as an abstract exercise but you never really apply your use of scales.

You learn the fingerings and that might make it easier to play a piece in that key, but they’re always a bit arbitrary and abstract and that’s why a lot of people find them quite boring and why we were talking previously about how to make your scale practice interesting. But in terms of what you hear in music, scales are really to be thought of as a framework and they can reveal a lot about what you’re hearing in music and give you a headstart on some of the more practical skills like playing by ear or improvising. They are an important topic but you need to approach them in the right way for them to be useful. If you take our ear expansion scales module, you’ll see we split scale listening skills into a couple of categories.

Or if you’re improvising in a certain style like blues guitar, you might pick the corresponding scale, well not corresponding but the suitable scale like the minor pentatonic can be great in blues. The different scales have their different contexts in music and that means learning to recognize the type of scale by ear can be very useful. That means, in the first instance if you literally just hear the scale note by note, you can recognize, okay, that was major or, okay, that was a minor pentatonic. But more practically, it means when you hear a melody or an improvised solo using the notes of that scale, you can hear, okay, that was a melody based on the minor, or the natural minor, or the pentatonic.

Then that gives you a really big headstart in figuring out what those notes were, if you wanted to write them down or play them on your own instrument, or use them as the basis for your own improvisation. Learning to recognize different scale types, that’s something we cover in our training module called scale recognition. It’s really useful just because it gives you that big headstart. If you hear a melody and you want to play it by ear, rather than thinking, “Every note could be literally any note on my instrument.” You think, “Okay, these notes are all from the minor pentatonic.” That narrows it down considerably. You start to hear how they fit into the scale and so that gives you another clue as to which notes you should be playing on your instrument when you play by ear.

That’s the first area, recognizing scale types. I just touched on the other secondary of which is learning where the notes fit into the scale. We’d call this scale degree recognition meaning you recognize which degree of the scale one, two, three, four, five, six, seven, eight, the note you heard was. This is more sophisticated. It takes longer to learn. It’s very closely, excuse me. It’s closely related to interval recognition because one way to think about to is you’re trying to hear how far each note is from the root, the tonic of the scale. It’s very closely related to solfa at the Do-Re-Mi system we were talking about at the start of the goal, because solfa really is a way of associating each degree of the scale with a meaningful name, which helps you tune your ear into recognizing them.

Inside Musical U, solfa is actually the approach we take to scale degree recognition. Most of our modules so far are focusing on the pentatonic scale because that’s very widely used and it’s a great first step. Our new score to sound with solfa module covers the major scale too. If you want to be able to hear a melody, for example and know more than just, okay, that’s a major key, or that’s using the minor pentatonic. If you want to very quickly move to playing by ear or transcribing, you’re going to want to recognize not just that the notes are all from a certain scale, but which notes from the scale each note is. solfa is a way to do that because when you hear the notes in the melody, you hear, okay, that was Fa-Fa-Mi-Mi-Re-Re-Do.

Then you know in C major, that would be F-F-E-E-D-D-C. That gives you a very quick shortcut to playing them on your instrument or writing them down or whatever you might like to do. Those are the two areas of scale training you can do really in music. We do separate them out a little bit in Musical U. If you’re thinking about scales, if you’re training, I’d encourage you to think a bit about which of those is more useful to you. In general, you’d probably want to start with some scale type recognition so that you can clearly spot major from minor and spot pentatonic versus a full diatonic scale, just because logically that’s the first step before you try and figure out where the notes fit into the scale. But you can also go directly to solfa if you know you’re mostly going to be playing major key songs, maybe that’s a quicker route for you.

As always, if you have any questions around this, feel free to post in your progress journal and myself with someone in the team will be more than happy to help. Hopefully that addresses the questions Stuart was raising there about scale training. It’s not something we focus a lot on just because it’s a means to an end. You could spend endless hours learning to recognize each and every type of scale each and every mode of each scale. But realistically for most people’s musical lives, you want to be able to recognize a few different types, like major, minor, and pentatonic and you want to be able to start to recognize the degrees of those scales which is why we focus a lot on solfa inside Musical U.