Home » Ear Training » Genres » Open Your Ears to the Blues

Open Your Ears to the Blues 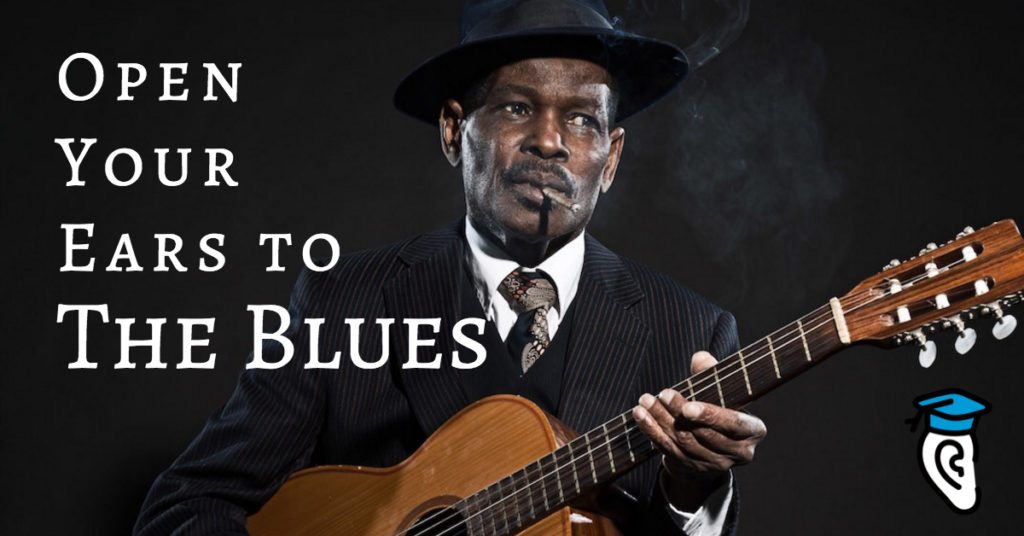 The blues is the birthplace of rock-n-roll, R&B, jazz, soul, and pop music. With a rich musical history stemming from the coasts of Africa, the music of working slaves, and folk music, the blues has impacted American music like no other style. With telltale lyrics of hardship and woe, recognizable musical forms, and chord progressions that blend African traditions with Western harmony, the blues is truly a fusion of the uniquely African-American experience.

During the American Civil Rights era, many leaders took up these songs to symbolize hope and freedom for people of color. Despite its wide impact, the blues slowly diminished as a popular genre by the end of the 20th century.

From Across the Ocean to the Cotton Fields of the South

When you think about the blues, what first comes to mind? Beyond the characteristic harmonies and “blue” notes, think the lyrics of hard times and wry humor of the blues.

The blues tell an unwritten history of the African-American experience. The blues harnessed the frustration and oppression of the slaves, even after emancipation granted them a restricted level of freedom in the United States. Work songs, traditional African call-and-response songs, spirituals, and folk music in the Deep South tell a story that’s not found in the history books.

The earliest traces of the blues incorporated drums. Slave owners discouraged traditional African percussion, for fear that percussion instruments could be used for communication. The slaves developed different ways to share their songs. A capella music, homemade instruments like the early banjo, and body rhythms like clapping, slapping, and stomping were integral to African-American music at work, play, and church.

The work song “I’ll Be So Glad When The Sun Goes Down” from the Mississippi Delta was a slave song that has several  musical elements in common with the blues: repeated lyrics, steady rhythm, a story to tell, simple chord structure, and call-and-response elements.

Songs like “I’ll Be So Glad When The Sun Goes Down” were often used for work both on the field and decades later in prisons. The work songs helped keep the workers in time like human machinery. Work songs also helped with the morale and mood of the prisoners.

Breaking Down the Blues

As mentioned earlier, the blues has a few standard characteristics that give it a unique sound: repeated 12 bar form, “blue” notes, simple rhythm, and basic harmony. Most songs have a walking bass line keeping the tempo underneath. The lyrics often tell a story in a way that can be both sad and humorous. Many blues tunes focus on the hardships of the African-American in the United States, but a number focus on falling in love, freedom, and hope.

The traditional African scales followed a different tuning system than the European instruments that the early slaves were required to play. In order to approximate what they were hearing in their heads, musicians “bent” some of the notes on their guitars, fiddles, and horns. Eventually these “blue notes” became approximated according to the limits of instruments like the piano, creating the blues scale.

Relative to the European major scale, the 3rd, 5th, and 7th degrees are often flat.

The blues form, derived originally from African call-and-response songs, is a twelve-bar format with a simple chord structure underneath based on I, IV, and V chords, often with an added seventh.

Try improvising over this track with your voice or instrument using the C Blues Scale (see above):

Generally speaking, the old-school blues songs has a slower tempo with a steady 4/4 beat, although metrical flexibility was not uncommon in early Delta blues. Listen here to Robert Johnson:

The blues tell a story. “Go Down Moses” is a traditional spiritual that embodies the plight of the African-American slave. In this song, “Pharaoh” refers to the slave masters. The people and Moses ask that they be set free from oppression.

The Whole World’s Got the Blues

Blues is still going strong. But – while not charting the commercial successes of other popular styles – rock, pop, hip-hop, R & B and jazz are all deeply saturated with blues forms, scales and ethos. From Janis Joplin to the Rolling Stones to Elvis to Christina Aguilera, musical artists have borrowed heavily from the blues in their own music.

The blues developed during the mid-20th century as technology brought new instruments like the electric guitar, better microphones, and amplifiers to the live music scene. This new form of electric blues started in the Mississippi Delta and Chicago, but soon spread to other parts of the United States. Blues-rock and British Blues developed, and soon the blues had spread to most popular genres.

Rock was born from the blues, and hard-rockin’ blues music is still a staple of club bands around the world. Early British rockers were avid collectors and imitators of early blues records. American rockers like Janis Joplin lived the blues. Joplin wrote “Kozmic Blues” after a period of emotional trauma and distress, the ideal conditions she felt she needed to create this type of tune.

There’s no denying the blues stylings of modern stars like Adele. Pop star Christina Aguilera loves singing traditional blues songs – most notably her rendition of “At Last” at Etta James’s funeral.  Aguilera’s “Ain’t No Other Man” tips its hat to the blues overall in its style.

Artists Tracy Chapman and Eric Clapton jam out to the blues in this live performance of Chapman’s tune “Give Me One Reason”. Following traditional twelve-bar blues structure, this modern blues tune is a classic example of how music with centuries-old history can be transformed for a contemporary audience. The song follows the repeated lyrical structure of the blues and tells the story of a lover debating whether it’s time to stay or go.

The Gift of the Blues

An incredible fusion of traditional African music, African-American songs, and folk music, the blues had a worldwide impact that continues to flow through the melodies and harmonies of musical artists today. With its tell-tale twelve-bar blues form, sorrowful lyrics, and “blue” notes, the blues touched nearly every musical style throughout American music, spreading internationally.

After a little listening, you will hear the blues everywhere! And now that you’ve familiarized yourself with the blues basics, go ahead and mess around with blues scales and forms in your own music.