Home » How To » Active Listening » Open Your Ears to The Elders

Open Your Ears to The Elders 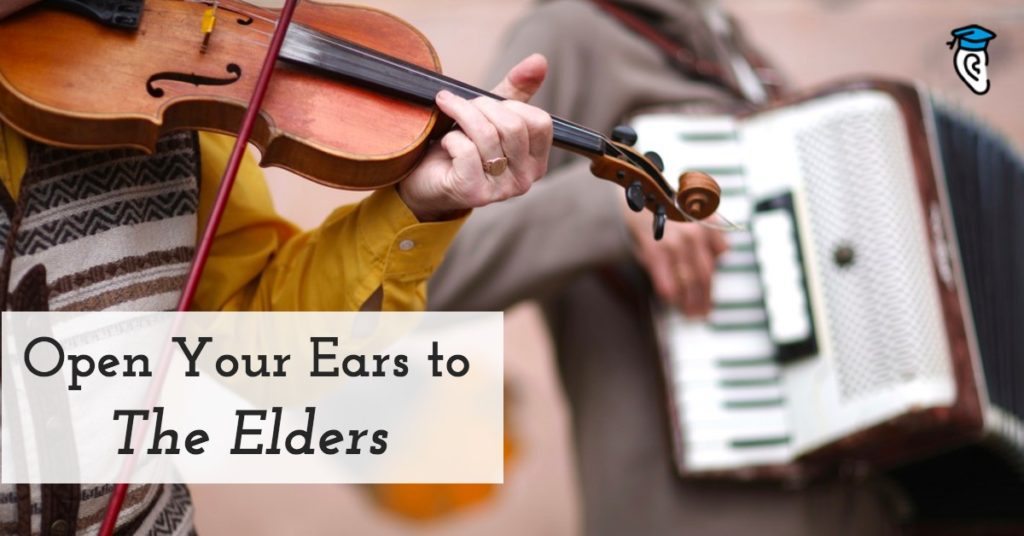 There are so many strands of Irish (Celtic) rock available from around the world today that it’s tricky to state across-the-board traits, or to declare exactly what the genre presents musically and lyrically. Ultimately though, that’s the beauty of Irish rock: that there exists so much variety, clearly dependent on the artists themselves—and on their background, message, and diverse performance styles.

A few constants can be counted on, including a strong metrical pulse in most songs, as well as melodies and countermelodies that compete across timbres like vocals, accordion, Irish whistle, keyboards, and fiddle. You may even notice a distinct vocalization style, where vowels are closed (almost nasal) and consonants are forced or pushed. No doubt you’ll latch on to the poetic messages that lean on Irish themes like friendship, past and present, work ethic, and loyalty.

The five songs analyzed below all feature a band called The Elders, based in the American Midwest but definitely rooted in an Irish attitude.

This song delivers on many fronts! The opening 60 seconds feature just vocals—first a solo (monophony) then polyphony in tight intervals, where only a steady drone (an unwavering pitch) underpins the emotional, minor-mode melody.

An accompanying instrumental contingent enters at [1:05], where the unmistakable sounds of accordion and fiddle stand out. At [1:10], don’t miss hints of “Danny Boy,” which demonstrate this song’s reliance on Irish culture. Here, though, the age-old melody is tweaked with some surprising semi-tones, or pitches outside the scale in use, and a descending counter-melody.

All sounding too gentle? Not to worry—the rock vibe is coming! Percussion (drum set plus Irish bodhran) enters alongside a call-and-response between vocals and the independent fiddle countermelody. You’ll also hear block chords sounding out in the keyboard.

At [3:30] the texture thins out to feature a drum solo—but it’s not the expected bodhran frame drum; instead, the lead singer shifts to a tall, cylindrical drum—likely of Brazilian origin, oddly enough—with a plastic (not vinyl or membrane) head. That, along with sticks instead of palms, produces a shallower, dry sound. That solo is soon layered with a dancing melody in the bowed fiddle’s lower range.

Throughout this song the lyrics relate messages common to Irish rock, referencing God, earth, and sky, plus other symbols like brotherhood and the dichotomy between past roots and future vision.

The instrumental introduction to “Thirteen Days” showcases a mandolin along with virtuosic 16th-note broken chords by the fiddler, all alternating with guitar strum exclamations. This song is great for paying attention to tempo shifts. It’s set in a simple duple meter, but look out for unexpected delays—where time sort of imperceptibly suspends, then races—all achieved through subtle accelerations and decelerations.

These musical tricks match brilliantly the notion of waiting and wishing coming across in the text. This is a phenomenon known as word painting—where lyrics are “translated” through musical devices. For a useful example, listen from [:54] to about [1:15] and focus just on tempo elasticity.

At [2:10] hear the conjunct (stepwise) descending bass theme (which reappears about one minute later) alongside the fiddle’s high-range countermelody in contrary motion. This short-lived diversion brings on the last verse, where more clever word painting occurs: notice how at about [2:39] the band mimics the motion of a locomotive’s rolling wheels to complement the lead singer’s words “When my train comes in I’ll know.”

“Common Man” is Irish rock with a funk blend, which speaks to the stretch these artists willingly take to broaden their audience. The song is built around a bass and percussion ostinato that underpins the song with its repetitive melodic and rhythmic pattern: let the constancy of that cycle hypnotize you just a bit, then open up to the first of many four-part polyphonic statements on the syllable “ho” at [0:13]. This chant of sorts will unify the song as it cycles back time and again, in-between verses and again at the end.

Verse 1 enters at [0:22] along with some slight, subtle vocal insertions to decorate the solo lyrics. These off-beat, improvisatory declamations, all on unobtrusive nonsense syllables, create an almost scat-like effect to contrast the lyrical, ascending main theme. At [1:56], focus on the short instrumental bridge that alerts you to the final verse arriving at [2:22], so familiar by now. At [3:25] the song moves into its final section, which is essentially a coda: a closed section again built on that pervasive “ho” chant (this time a cappella) to tie up the entire song.

This Elders’ fan favorite begins in a monophonic texture with a rather pulse-less solo voice declamation over an unwavering drone. This main melody, balanced by a contour that ascends then descends, will repeat extensively. A thicker 4-part polyphony enters, built from a mix of vertical sonorities; here, independent vocal lines create stacked chords made of thirds and fourths.

Try listening in to each singer’s part, one by one. You might need headphones! Listen especially to the steady bass, which barely moves up or down in pitch.

Note how the singers’ vocal style boasts a focused, straight tone that pushes through to closed vowels (e.g. “crah-ee” for “cry”). The lead singer even noticeably closes deliberately to the “n” on certain words, all lending a particular tension to the poignant text.

This song is a modified strophic form, without strict refrain: with each musically repetitive verse come different lyrics, each extolling typical Irish themes (family, past/present, spirituality, migration). Dynamic changes are obvious in verse four, thanks to shifts in vocal textures.

Follow how the song reduces back to solo, which then gives way to duet. The full choral contingent soon enough returns, and each creative contrast does much to alleviate any redundancy that the musical repetition might impose. Get ready for a treat at [3:30], when bagpipes and the crisp snare drum take over from the voices, ending the song with more of a march.

This Steve Earle song has been covered by numerous artists, including Mumford and Sons. Here the lead’s understated vocals (and only simple percussion to infuse momentum) leave the emphasis on the narrative lyrics. In fact, you may sense that the song moves at a “walking” tempo, in quadruple meter, which helps to secure the story being told.

“Galway Girl” has a colorful mix of instruments, including tambourine, mandolin, bass guitar, fiddle, drum set, and keyboard. Even with that thick texture, at [0:43] the signature whistle is noticeable, then it’ll re-enter at [1:28], now with trills (which sound like little flutters) to ornament its part in harmonizing with the fiddle (listen as the whistle reaches the top of its range near the end). This core timbre combines after each statement of the refrain, and note how the fiddler consistently alternates pizzicato (plucking instead of bowing) for verses and bowing for the refrain.

At [2:00] comes a short bridge to the final verse, after a longer instrumental interlude. The final verse at [2:15] hints at community and brotherhood by playing up what seem like casual, improvisatory interjections and playful shouts.

Why have the seeds of Irish Rock taken root and grown with such momentum in so many places near and far from the Emerald Isle? Open your ears to The Elders for the answer! This band continues to weave fresh new songs from the older musical and cultural threads of traditional Irish, Rock, and the now decades old tradition of Irish Rock itself; gaining more fans worldwide everyday.

As we listen closely to bands like The Elders, we can also begin to imagine ways to repurpose the musical experiences of our own lives to bring us to new expressive heights!