How to Prevent Musical Burnout 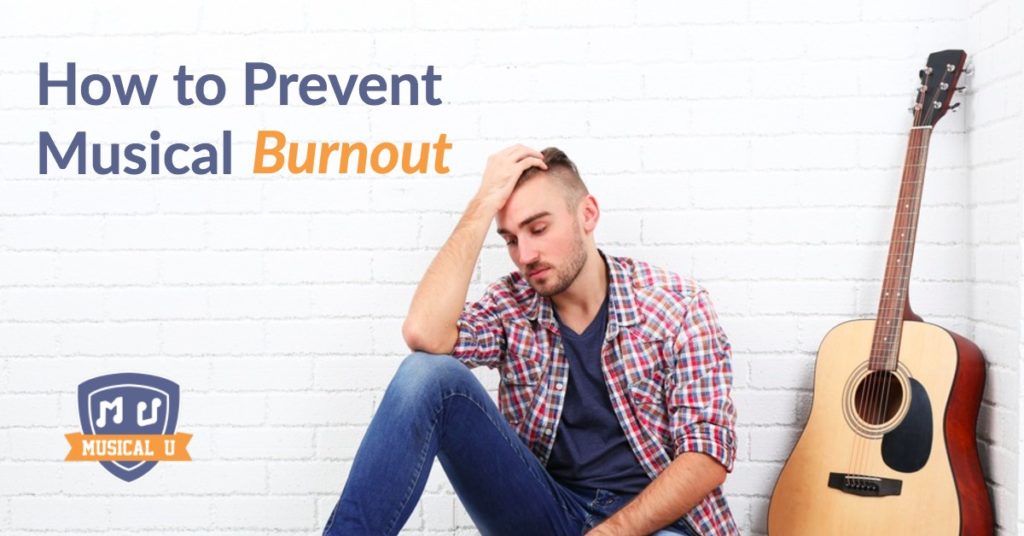 We’ve all heard musician friends talk in passing about being “musically burned out”. Although it might be said lightly, burn-out is a real thing and it’s unfortunate, because of how much pleasure and enjoyment is lost from playing music when it happens.

It is sad that we can get to a point where music loses all its zing for us.

When thinking and writing about this I am looking at myself, friends I know in the industry and also some who got so burned out they are no longer playing professionally at all.

There are quite a few articles already online on the subject of musical burn-out but I wanted to share a few things I have seen and learned myself over the years.

How does musical burn-out happen?

So where does musical burn-out come from? From what I’ve seen, we all start out from the same place: we want to learn an instrument, become proficient and then reach for the dreams we have inside. We take lessons, play in groups, maybe go to school or start a band. We do all and learn all we can to “make it big”.

Our time is filled with music. We read, eat, breath, live music.

We all have been there. We dedicate all our time to becoming the musician we dream of being.

When we are young we put a ton of time into becoming the best at our instrument. Lessons, special tutorials, contests and concerts…

One person I talked to about this got as far as getting to play at Carnegie Hall on bassoon! That was his pinnacle, you could say. I remember in high school he also played clarinet, saxophone, baritone sax and more. He was always the top player, always the soloist.

Nowadays? He doesn’t even touch his instrument.

Another person I talked with put all his time and efforts into trumpet and performance and went far. In school he was the trumpet prodigy. Eventually he played on the Grand Ole Opry stage and got to play with names such as Garth Brooks, Vince Gill, Oak Ridge Boys. He even had his own show in Vegas.

Once again—he now isn’t even playing any more.

The Musician’s Life and the Drama

There is another facet to this topic which emerged when I talked to a few friends who have played in many of the same circles I have, and that is the word “drama”.

There are times the burnout comes not from the music itself, but from trying to play with others and make a band work and become successful. At times we end up with our fill of it because no matter what we think, the drama can zap the enjoyment out of making music. We can see this happen with big name bands in the media, as they go through member change after member change. As I write this I wonder in amazement how the Rolling Stones have kept it going for so long!

Another very long-lived band who although they have stayed together have had to deal with burnout is Rush. In an LA Times article they discussed a moment when they had to make some changes:

“Neil wasn’t too happy then, but neither was the rest of us,” Geddy Lee said. “We were burned out on tour and not playing too well and not caring about it—that’s the worst. You just go on stage and do another show, but you’re not all there. It’s too much on automatic pilot.”

All this happened after the 1982 album “Signals” which one critic snidely labelled “a complete mess.” The songs seemed meandering, incomplete and often chaotic. Peart’s lyrics, which frequently hammer out an Ayn Rand-like passion for the rights of the individual, were mired in pretentions.

Fortunately the band managed to make some changes to salvage their music from the burnout and have continued to go on creating new amazing music since.

Burnout can strike from the teen instrumentalist to the biggest bands in the world—yet there are some I’ve talked with and watched from afar who have somehow been able to keep going and keep enjoying the musical life while avoiding this dangerous pitfall.

So, what do they do differently?

How to Prevent Musical Burnout

There’s one thing I have seen with all the people who have kept at it: leading a “full” life.

No one can do one thing all the time without eventually getting tired of it.

It is like pizza. Stay with me here! Now I love pizza, and could happily eat a lot of it.

But at some point if I were to eat nothing but pizza every day, I would get sick of it and couldn’t take anymore.

The same thing happens with music—or anything for that matter.

We need to make sure we have other aspects to our life as well as music. That means taking breaks from your music-making and finding other things to enjoy. That might be family, good friends, hobbies, or simply rest. If you are in a band, make sure you find things to do together outside of the rehearsal room and studio.

In this article on musical burnout there’s a discussion of the legendary jazz saxophonist Sonny Rollins who played with Miles Davis, Dizzy Gillespie, Thelonious Monk and more:

“Sonny Rollins took several years off in the 60s and 70s to go to Asia to study yoga, meditation and Eastern philosophies.”

For myself, I find great refreshment from stepping away from music. Turning it all off, focusing on something different—like time with my wife, golfing, or photography—and then coming back to what I was working on later.

Oddly those other things can actually inspire the music. You return to the project you’d been starting to feel burned out on with a fresh energy and zeal to continue.

Concerning the drama issue and burnout, which mostly happens in groups, I highly recommend one thing: find others that you can get along with and learn what you can deal with and what you can’t.

The more you know who you are and what you want, the less you let things upset you.

Be honest with bandmates (and yourself!) on issues that arise. If you get the right mix of folks you enjoy playing and writing music with, it’s more than likely you won’t just have lifelong music collaborators but also lifelong friends too.

So, what will it be for you? If you’re committed to the musical life then burnout is a challenge you’ll find yourself up against, sooner or later. Think about it now and see what you can do to avoid or quickly recover from burnout when it arises.

Only you know what will work for you—but if you want to make music a career or even just a successful lifetime hobby, I highly recommend finding some other things you can enjoy and use to take breaks from your main music outlets.

I once got to meet Randy Bachman (the Guess Who, BTO, solo artist). His big side outlet was actually collecting guitars—still kind of music but still different from the music-making itself. He was a gearhead especially with classics and he ended up collecting the largest collection of Gretsch guitars in the world! Alice Cooper and other great musicians are also passionate about golf. Brian Johnson, singer from AC/DC, races vintage race cars, as does Pink Floyd drummer, Nick Mason.

To keep from burning out on music, you simply need to find things you genuinely enjoy which can take you away from the music temporarily. That way you don’t put so much pressure on your music-making that you take it to breaking point and you have a way to balance things out when it all gets too much.

It may seem counter-intuitive—but far from detracting from your devotion to music, this is actually the best way to maximise your musical potential.

Now it’s time for you to think about it, talk about it with musical friends, and start putting plans in place to prevent and recover from musical burnout. We’ve been discussing it in the community here at Musical U lately. Leave your own thoughts in the comments below.