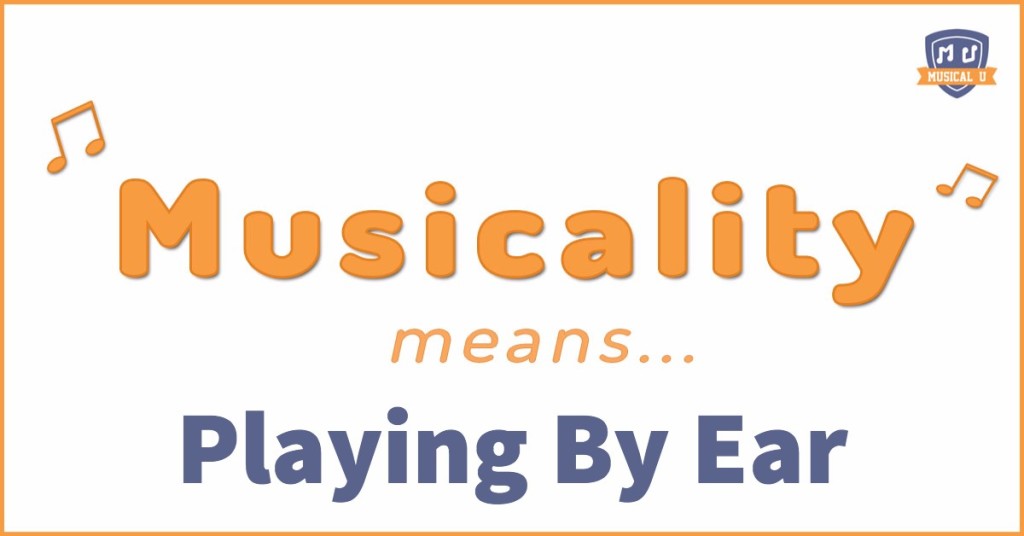 Playing music by ear is seen by many as the pinnacle of musicality. To be able to pick up an instrument and play any song you’ve heard, without needing to have learned it beforehand or have sheet music to read from – it’s an impressive skill to have, and one which makes the listener think “Wow, that person is really musical.”

Although playing by ear can seem like magic to anyone who can’t do it, the truth is that most musicians who do it have learned to. They weren’t born being able to pick up a guitar and strum the latest Taylor Swift song, or sit down at a piano keyboard and effortlessly create a sparkling performance of a Billy Joel classic.

It might seem like playing by ear is the ultimate “musical gift” but in reality it’s a collection of learnable musical skills.

What is “playing by ear”?

What exactly playing by ear involves depends on your instrument and the situation.

Playing by ear means you can hear the notes you need to play in your head – and then pick up your instrument and play them.

Why playing by ear matters to musicians

As explained above, playing by ear is an impressive skill. But it’s important for more than just showing off and convincing people you’re “naturally musical”.

It’s important to learn to play by ear because it gives you real freedom on your instrument.

Musicians who never learn to play by ear can become very technically proficient with their instrument, playing lightning-fast scales and arpeggios, learning high-level repertoire, passing all their grade exams and playing at a high level in orchestras and bands. But if you ask them, most of them will admit they still feel pretty nervous going beyond the pieces they’ve carefully learned and practiced. When you can play by ear your music skills don’t seem so fragile. You don’t need to worry so much about memorising pieces or always having sheet music to hand. You don’t get nervous if someone asks you to play something you haven’t already learned, and you don’t get anxious in new musical situations where you might be asked to play unprepared.

You feel confident every time you pick up your instrument because you are truly free to play whatever you want to. Your play-by-ear renditions might not be note perfect, and there’s always a role for careful learning of exact arrangements from the score – but when you don’t need the crutch of sheet music or memorisation you can be much more confident each time you pick up your instrument to play.

Playing by ear gives you a much more intimate relationship with your instrument. Because the music is coming directly from your imagination out into the world through your fingers, it feels more personal. It’s just you and the instrument. When you depend on sheet music, it always feels as if somebody else is telling you what notes to play. When you play by ear, it’s all coming from you.

It’s also powerful for enhancing your musical expression. Just like memorising a piece instead of reading the score liberates you to focus on the details of how you shape each note and phrase, and allows you to play more moving performances, when you play by ear you take it one step further, bypassing the note-by-note way of thinking and allowing your inner feelings to come out more directly through the music.

In short, playing by ear isn’t really about impressing the listener. It’s about freeing you up to be more deeply connected with your instrument and the music you play.

How you can learn to play by ear

Playing by ear comes in many different forms, depending on the instrument, genre, and musical situation. As mentioned above it can be as simple as playing a single line melody or as complicated as a two-hand seven-octave piano arrangement. But at its core, learning to play by ear always relies on the same set of skills.

You need to develop good relative pitch. This is your ability to judge the distances between notes, which lets you hear a set of notes in your head and translate it into notes on your instrument. Relative pitch includes figuring out the notes of melodies by ear and also chord progressions and harmony. You can learn relative pitch using a pure interval recognition approach or a key-based (a.k.a. functional) approach such as solfa (do, re, mi). You’ll also need a good sense of rhythm. A lot of musicians take this side of things for granted because most find it easier to play rhythms by ear than figuring out the note pitches. But the reality is that accurate and creative use of rhythm can set a mediocre performance apart from a truly expressive and moving one, and so learning to play rhythms by ear well can make a big difference to your overall play-by-ear ability.

The final important piece of learning to play by ear is musical imagination. This covers two main areas: your musical memory and your ability to audiate.

The memory side of things is probably obvious to you: if you want to play the pop song you heard last week by ear, you’re going to need to remember how it went! But there is a subtlety there. It’s one thing to remember the catchy hook or chorus vocals of a song, but quite another to remember the detail of the song’s arrangement and the various parts such as chords, verse and bridge. You can convince someone for a moment by playing the easy-to-remember bit, but to really play a song by ear you’ll need a strong and detailed musical memory for all the parts of the music you hear.

This ties in with the second part of musical imagination: your ability to audiate. Audiation simply means hearing music in your head, on demand. When you try to remember a song you heard, you generally audiate it, imagining it playing again in your mind. You also audiate if you try to imagine music before you play it when improvising. All musicians (and most people) can audiate to some degree, but it takes dedicated practice to learn to audiate in detail, so that your “mind’s ear” can conjure up rich arrangements in detail, and not just the bare skeleton of a song. Naturally, the detail of your musical memory depends on the detail of your audiation skills, and your ability to play a song well by ear depends on both of these.

How Musical U helps you play by ear At Musical U we focus strongly on helping musicians play by ear, and we take a very clear skills-based approach. Most musicians who set out to play by ear simply try and try again, hoping that they’ll eventually stumble their way to success. In the majority of cases they try for a while and then unfortunately conclude that they “just can’t do it” and give up.

There is a role for this “try, try and try again” aspect of learning to play by ear, but you can dramatically improve your odds of success by learning specific component skills which contribute to your ability to play by ear.

We also have a set of training modules dedicated to improving your sense of rhythm and your ability to perform back rhythms you’ve heard, with accuracy and nuance.

Throughout our modules we take a holistic approach, helping you to connect these specific skills with the bigger picture of playing by ear and using the skills on your instrument, helping you to gradually build up your musical imagination in the process.

To make it even easier for our members to learn play-by-ear skills we provide two Roadmaps for learning to play melodies and chords by ear:

If you’ve ever seen a musician play a song without having learned it beforehand or reading from sheet music, you’ve likely thought they had a special talent or a gift that you don’t have yourself.

The reality is that those skills can be yours too, and it’s much more methodical to learn than you might have imagined.

Learning to play by ear can be easy and fun if you take the right approach and you have good training resources and expert help. It is ultimately one of the most rewarding musical activities you can enjoy, and a true sign of learned musicality.