by Musical U Team | Musical U Spotlight Members, Planning and Goals, Solfa | 0 comments 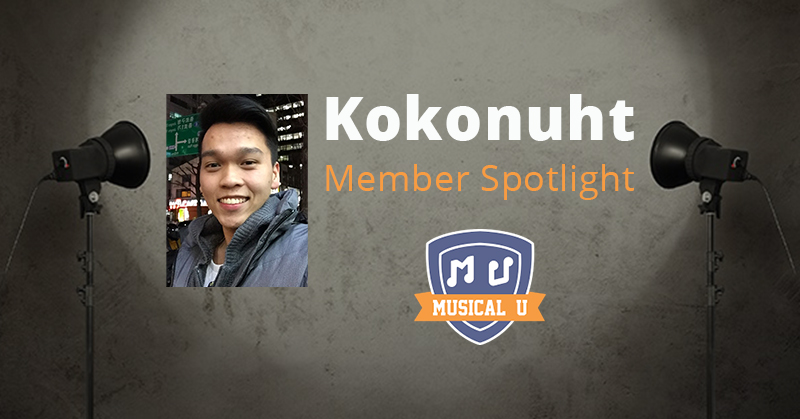 One of the best ways to stay motivated is to see how other people have achieved their goals. That’s why we think it’s important to talk with our community and get their tales of success. By following the journeys of others, you’ll be able to make connections to your own experience and take your skills to the next level.

This month, we had a conversation with one of our members, Kokonuht. He graciously took the time to describe the goals he wishes to achieve using Musical U’s helpful community and his progress journal, as well as some of the long-term goals he’s working toward.

Musical U: Where did your username come from?

Kokonuht: I came up with it randomly when I was 15, but it apparently had a deep meaning, too.

MU: Where in the world are you?

MU: What instrument(s) do you play?

KN: Piano/keyboard, and I sing.

KN: To be a well-known and inspirational singer/voice teacher.

MU: What have you struggled most with in music in the past?

KN: First, hearing my pitches that were off when singing. Nowadays there are some that are a semitone flat, but mostly just quarter notes flat – which are still on key but are just annoying to listen to.

Second, hearing out the chords for songs. Melodies were really simple for me, though music theory did help me figure out chords theoretically.

Third, [hearing] harmonies by ear. After 3 years of randomly trying to harmonise, I can now harmonise by ear a 3rd and a 4th above the main melody.

MU: Anything else we should know about you?

KN: [I turned 21 last year] and am studying in LaSalle College of the Arts in Singapore with a Diploma in Music. I am originally from Malaysia.

I’m really hoping to achieve what I’ve always wanted to with Musical U – being able to be on pitch 99–100% of the time; being able to hear chords, inversions, and intervals clearly; and being able to harmonise by ear accurately above and below the melody line. Probably some different harmonies like counterpoint harmonies, too!

I know that’s a lot of work, and it does take a substantial amount of time. I have decided to make music my career and thus, I’ll be putting in the effort to understand and grab ahold of it more.

Getting Started with Musical U

Musical U: Before joining Musical U, where were you stuck?

KN: Before joining Musical U, I was literally lost on what to do for ear training. I knew about solfège – Do Re Mi Fa So La Ti Do –  but I didn’t know how important it was and how effective it is to apply it to my own singing in actual songs and harmonies!

I was stuck on having imprecise intonation. Some melodies I tried to sing after hearing them once would not be very precise either. But now, after discovering the importance of solfège and how it can help with my intonation, my skill has improved tenfold…

MU: How did you become interested in Musical U? Why did you decide to try it?

KN: I knew I needed a stronger ear to harmonise better. I always thought my pitching was good, but once I got into college and met people with amazing musical ears, I noticed their intonation was so much more superb and precise than mine. Many times, I’ve wondered, “Why don’t I sound nice?” I noticed this was mainly due to my intonation, as well!

Before joining Musical U, I was literally lost on what to do for ear training.

So knowing my goal was to develop a better musical ear, I decided to try out Musical U.

The Road to Learning

MU: What has stood out during your journey?

KN: I’d have to say the importance and effectiveness of solfège as an ear training tool. It is amazing and is doing me wonders right now.

Just knowing about it was not enough, though. Once I thought of applying it to my singing, it totally changed the way I look at songs and now I constantly look for the ”Do” (tonic) in the songs I listen to and try to figure out the solfège for each melody so as to have precise intonation.

Kokonuht works on the solfege for “Smooth” by Santana

MU: What’s the biggest benefit you’ve gotten from Musical U so far? Why is it important to you?

KN: Knowledge of how ear training works, how to do it, how to practise it, and how to apply it. Everything is literally taken step-by-step and it’s really amazing. It’s like a clear, even path through the rocky, uneven mountains.

When in doubt, there’s always someone to ask your questions! This community is literally a step-by-step place with all the basic information you need to get you further in your musicianship!

It’s important to me as it has really shown me all the different things that I have to work on! I never thought about solfège, intervals, or even hearing out the chord progressions like 1-4-5. All I used to think was just, “Oh, learn the melody and get the chords” and when I transposed to a different key I’d have to work it out chord by chord, note by note. Now that I know they are all linked by a specific system, it’s so much easier.

Everything is literally taken step-by-step and it’s really amazing. It’s like a clear, even path through the rocky, uneven mountains.

I suppose, sometimes we don’t know what we don’t know; and Musical U is here to show you what you should know.

MU: How have your plans changed along the way?

KN: According to my progress journal, my original plan was to get to harmonising confidently by ear. Now, I definitely am changing my plan. Instead of harmonising by ear, I’m going to aim for improving my solfège and drill it into my brain which, in turn, will allow me to hear out melodies in solfège. That will allow me to harmonise by ear more confidently and with precision as well!

MU: Has keeping a progress journal helped your musicality?

KN: Definitely! I was able to see where I was when I first started and how I have progressed.

Not only does it serve as a source of inspiration and encouragement, but it also forces you to deliberately plan out your training, which is really important. Even if I knew how all these intervals and solfège worked, but I never practised them, I wouldn’t progress at all.

With my progress journal, the steps for me to improve myself are clear. It is simply amazing! Kokonuht knows that he needs to work hard toward his goals to become a stronger musician, and he’s been putting in that effort and making a lot of progress in just a few short months.

By using our community support system, he’s developed knowledge about the skills he needs and what work is yet to be done. His progress journal has also provided him with a place to record what he’s learned.

During his time at Musical U, he has gone from feeling lost when it comes to ear training, to having a clear grasp of solfege and using it to help him sing more accurately and reliably in his college groups. He even recently won a contest inside Musical U by creating a great play-by-ear tutorial for the song “Tuesday’s Gone” by Lynyrd Skynyrd! We think that’s a great achievement in a short time – kudos to Kokonuht!

Thanks again to Kokonuht for joining us for this Member Spotlight! In the Musical U community we’re all excited to see his continuing improvement.

Want to pursue your own musical development like Kokonuht? Joining Musical U is a fantastic first step towards accomplishing your musical goals – small or large. Our comprehensive training modules, expert team and supportive community are here to provide you with essential musical know-how and support you on your path to success.