by Musical U Team | Singing | 0 comments 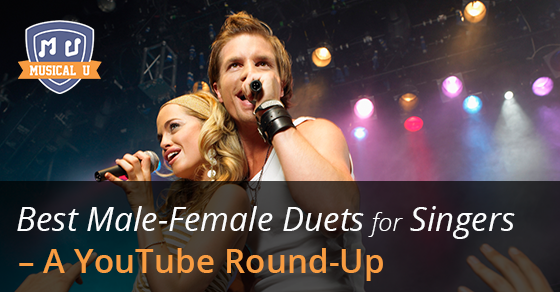 Duets have become a staple of modern music. It’s a great way for artists to collaborate with their favorite performers or a fun choice that combines musical styles. These duets are as iconic as they are memorable. From stories about love lost to tales of a special place, there is something for every duo.

This beloved classic was first heard in the 1981 film of the same name. The duet became one of the most beloved ballads in the world, holding down the #1 spot on the Billboard Hot 100 list for 9 weeks. Billboard has even deemed it the best love song of all times. Singers covering this tune will find an even balance of lyrics between male and female roles.

Elton John and his songwriting partner Bernie Taupin wrote this upbeat duet that would go on to become #1 on a range of charts. A fun back and forth between the singers makes this a perfect choice for parties.

“Empire State of Mind” proves how successful it can be to add rap to a standard composition. Singer Alicia Keys brought out a powerful hook that completes this hit song. It would go on to win numerous awards, including the BET Hip Hop Award for Best Track of the Year. Give this track a try next time you’re in the mood for hip-swaying karaoke.

Father and daughter come together to redo this classic song. It’s been covered numerous times as a duet, but others have attempted their own versions with one singer as well. The song’s origin is traced back to the duo of Carson and Gaile, originally released in 1966.

Sometimes classic duets come together for surprising reasons. This classic song was actually comprised of two versions of the same song. A local DJ combined the versions to create a duet that has become one of the best duets of all time.

Grease is one of the most beloved musicals of all time and as a result, “You’re the One That I Want” is recognized all around the world. Packed with jolts and excitement, it’s a fun choice that the whole crowd enjoys.

Michael Jackson’s release of Bad in 1987 saw several chart-topping hits, including “I Just Can’t Stop Loving You.” Its powerful chorus was the perfect contrast to a slower tempo throughout the song.

These great duet selections are perfect for new singers as well as vocalists seeking fresh challenges for their skills. We’re sure you and your partner will find something to love about each one of these hand-picked selections.

What did you think of our choices? Do you have a favorite duet that wasn’t listed? Add your voice to the conversation and let us know in the comments!

Musical U is committed to helping musicians reach their goals and our community are always eager to help out other members. Join today and start becoming the musician you’ve always wanted to be!