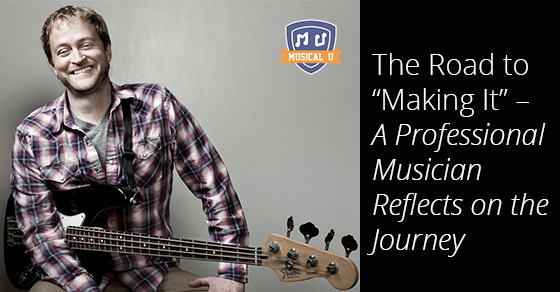 This week at Musical U we had an opportunity to sit down and hang out with Chris Tarry, a NYC-based bassist. Chris’ resume is impressive; he’s played all over New York and toured with other bands and musicians all over the United States. Earlier this year, he had his first work of fiction published. This guy is always busy, and for good reason.

Chris had some awesome nuggets to share about practicing and really “making it” as a musician. From staying focused and motivated to continuing to push to be better than the day before, Chris reminded us of the road to constant improvement. Keep reading to see what we mean.

To learn more about Chris and his music, visit his website, christarry.com or check out his Facebook page.

Musical U: Thanks for taking the time to chat with us, Chris.

Chris Tarry: I’m happy to do it. Thanks for inviting me!

MU: Well let’s just hop right in. Tell us a little bit about how you got started.

CT: Well, I started at around 16 and I’m now 45. (Laughs) So I’ve been doing this for a while. I started in high school and started playing pro within about a year of getting started. The first band I was in was called “Molotov Cocktail” and we played pretty much all Guns ‘N Roses stuff. My friends were forming the band and the only instrument that wasn’t claimed or I guess, the only one they really needed, was bass. And that’s basically how I picked it up. (Laughs)

I remember spending a lot of time playing and listening to some great jazz musicians, Miles Davis and Keith Jarrett and a lot of others. I listened to a lot of R&B stuff when I was getting started and just kind of learned by listening and playing along.

MU: You went pro so early! So basically, you’ve been doing the “music thing” for your entire professional life. Did you ever think about quitting in the past and if so, how did you handle it? Why didn’t you quit?

CT: Yeah. I mean, I was living in Vancouver, B.C. and I’d had a pretty successful career [up to that point]. So I was feeling a little bit like – I’m a kind of guy that likes to do a lot of things and I’ve always believed, “Man cannot live on bass alone” – so I was thinking about doing something different. Maybe becoming a cop or doing something sort of “legitimate” or having a “normal” job. And I decided instead to give it one more kick at the can and go to New York and study. And so that’s what I did. I’m still kind of going at it, 12 years later.

MU: If you had gotten a legitimate job, would you have quit bass altogether? Or just wouldn’t have pursued it as a means of living?

CT: No, I probably would have gotten a real job and then gotten scared and quit and went back to bass. (Laughs) That tends to be my M.O. Although now, I seem to be so many different things. My writing was more of a long development, so maybe it didn’t scare me away as much. So I seem to be doing both pretty equally now.

MU: How do goals figure into your practice time? As a professional musician, do you still set goals regularly?

CT: I have to set goals now, especially now with the schedule and the kids and commitments. Like, tomorrow I’m going on tour with an artist and I have this afternoon, basically, to learn all the music.

The thing with New York – it’s always… it’s a very high pressure city, in terms of musicianship. So basically, my practice time now is just practicing other people’s material and making sure I’m ready for whatever gig I’m doing.

MU: Do you now, or have you ever, kept a practice journal? Any kind of written record of what you’re working on?

CT: It sounds like we’re in court! (Laughs) I have in the past and you know, I think that practicing and musical development goes in stages. Different things work at different times, depending on where you are in your life. I definitely went through those periods where I was practicing 8 hours a day for many years. So, maybe during those times, I did keep some kind of journals, but I was never really that organized about it.

It was always like… I would see somebody playing and say, “That. I want to learn how to do what they’re doing” and “I want to do that.” So I would work on that really intensely for a long time, you know, for months at a time, and then move on to something else.

For me, it works for some people to say, “From 3-3:30, I’m going to practice my scales and from 3:30-4 I’m going to practice my arpeggios.” To me, god, I would have given up a long time ago. You gotta have – and this is what I tell my students – you have to be doing 60% work and the rest of it, you should be learning stuff you want to learn. You know, you need to be learning stuff that you want to learn, not just the stuff that you’re told to learn. It’s a combination. You need to find that balance.

MU: What’s the hardest part, would you say, about staying motivated to practice?

CT: That’s a good one because right now, it’s harder and harder. Staying motivated to practice, I think, is… Probably just like, the thought of doing live gigs and stuff. That’s the sort of stuff that motivates me is just getting out there and playing. The practicing part for me, like I said, is very utilitarian in a way. I rarely have time just to practice to practice.

This is my job, you know, so a lot of it is making sure, just like any other job, that I’m prepared.

MU: How do you filter out your “disinterest” and get focused on the work?

CT: I just have to. My kids are in daycare. It’s easy to get into the mindset when you know they’re all coming back at 5:00 and that’s all you get. There’s never a wasted moment. You need to be very compartmentalized and you need to build that schedule into your daily schedule. It’s in my calendar so that I can actually walk around and function as a human being.

MU: What are some best practicing tips that you would suggest to aspiring musicians?

And transcribe. People don’t transcribe enough. Play along with records – that’s the most important part. You can only learn so much by doing arpeggios and scales and all that stuff. The way you really learn is by mimicking and playing along with records. At least, as a bass player!

Most great musicians that I know and work with, I think, would say that playing along with records is a quintessential part of learning and I don’t think institutions and schools push that. A lot of people say transcribe stuff, actually write it down. Which is really cool, but you have to be able to actually play along. Your time gets better, your ears get better. They’re not going to stop, just like a real band. So there’s a lot of positives to it. That’s how you learn.

MU: Any other advice that you would give?

You know, a lot of people don’t understand what “doing the best job” actually looks like. You see, music is interesting because you don’t have any reference point in terms of what the level of something is. You can be the best drummer in the smallest town in the world and think, “Oh, I’ve got my stuff totally together.” Until you push yourself and take that stuff to the next level, and put yourself in situations that are above you, you never really know the difference between “good” and “bad.” That’s the one thing that New York does: it teaches you what the absolute best is. It teaches you, you know, accept no substitute for yourself.

It doesn’t mean you have to move to New York. It means that you have to listen to recordings and play along like I said and discover what it is about those recordings that make them great. Then you get that into your playing.

It’s not good enough to be, “Oh, I’m sort of playing along with it” or “Yeah, that’s sort of the guitar riff.” I always tell my students: “Figure out what that dude had for breakfast the morning he played that.” That’s the kind of level you need to scrutinize the stuff you’re playing, learning, and your approach. It needs to be unrelenting and unforgiving. That’s the stuff they don’t teach in college enough. (Laughs) Some people have that built into their system and some don’t.

MU: What would you say is a challenge that you would say you had to overcome in your career?

CT: In a way, it’s very instrument-specific. Sort of overcoming my inability on the instrument, you know? The instrument always wins! (Laughs) That’s the sort of battle there always is, no matter what level you are. If you have no acceptance for mediocrity, you just have to come to terms with that.

MU: When did you feel like you really “made it” as a musician?

CT: I still don’t! (Laughs) It’s like anything else, like any job or anything that you do. There’s always somebody out there that seems to be doing it better or at a higher level. I think that’s just humanity; we always think that. I know that I’ve had some successes and some career stuff that people would look at and be like, “You’ve made it!” But, you know, to me, it’s just like… what’s happening next week. It’s just a continuous journey to get better.

Thanks again, Chris, for joining us here on the Musical U blog to share your insights and wisdom on “making it” in music!

To learn more about Chris and his music, visit his website or check out his Facebook page.