Last time we talked about Les Paul’s role as the father of the electric guitar. Nobody can question the significance of his innovations there, but that was far from the limit of his contribution to modern music. Next up we’ll be learning about the part he played in the development of modern audio recording.

Les was just as fascinated with recorded sound as he was with the electric guitar and he was equally important in its development. To put the revolution Les spearheaded in context we need to go back in time to the 1930’s. Sound recording and reproduction technology had already been around for some time, but it was a purely mechanical process with no electronics involved. Early recording systems were nothing more than a stylus attached to a diaphragm, etching a groove directly into a spinning wax disc. The sound waves produced by the musician vibrated the diaphragm causing the stylus to carve grooves into the moving disc. (This is where the phrase “cut a record” comes from!)

What may surprise modern readers is that the “wax masters” produced could only be used to create a handful of gramophone records before they became damaged! Popular performers had to play a song many times over with multiple recording devices in front of them in order to produce a decent batch of copies to sell.

By the time Les was performing, disc reproduction had improved to the degree that many records could be made from a single performance, but recording still carved directly into a disc – meaning one bum note and the disc was ruined… Unlike us pampered musicians of the Pro Tools era, in the 30’s you had to get it right first time.

Today anyone with a laptop and some inexpensive (or even free) software can have a home studio that puts the recording technology available to classic acts like the Beatles to shame, but back in Les Paul’s day the idea of having a your own recording studio was completely unheard of. Even if you had the money there simply weren’t shops where you could buy the equipment. So in typical style, Les built his own.

Using a flywheel (liberated from a relative’s auto repair business) he built a turntable he could use to record wax discs. With this kind of ingenuity, Les was able to put together a basic home studio, but if he wanted to record anything other than solo guitar he would need to hire some musicians for the session. To make hit records at home without bankrupting himself with session fees he would need to work out a way to play more than one part himself.

To achieve this, Les pioneered a technique called “sound on sound” (after which the famous sound engineering magazine is named).

In ‘sound on sound’ recording you perform and record the first part of your piece as normal. Then you take the recording you just made and play it back into another recorder while you perform the second musical part. The result is a new recording with the first and second parts mixed together.

Sound on sound recording with discs is an expensive business, every step of the process consuming another disc. Ever the perfectionist, Les managed to consume 500 discs producing his first sound on sound hit, “Lover”!

Les’ experiments were allowing him to explore new sonic territories, but the process of sound on sound recording on disc was slow and laborious. Even worse, each successive layer of sound recorded would degrade the sound of the previous recordings, until they became a crackly mess. Fortunately another recording technology was on its way…

A new world of recording opened up to Les when an engineer named John Mullin returned fresh from fighting in the second world war with a revolutionary device commandeered from the German military. By the early 40’s the idea of recording sound using the properties of magnetism had been around for some time, but the technique was perfected by the German military during the war. Early attempts used drums of steel wire running through the recording device, but the results were poor – and steel wire is heavy and in short supply during war time. The German ‘magnetophon’ had two significant advances: Firstly it used magnetic tape instead of steel wire (you can think of early recording tape as similar to sellotape dipped in iron filings!) and secondly it added a technique called ‘biasing’ which dramatically improved the sound quality of recordings.

Mullin realised that if he could develop his own design for an improved tape recorder he might be able to sell it to film studios and musicians.

Bing Crosby was a huge recording star of the era but he hated having to wait around at radio studios to perform live broadcasts. He had tried unsuccessfully to record shows to disc but the sound quality was so poor the radio stations refused to use them.

An 'off-air' radio recording by Bing Crosby, recorded on disc. Note the characteristic hiss and crackle.

When Mullin discovered that Crosby had stopped performing his radio show because of the recording problem he doorstepped Bing at a film studio and demonstrated the machine. Bing instantly realised the potential and invested in the technology, buying electronic engineering firm Ampex to manufacture the machines, and installing Mullin as its chief engineer.

At this time Les was playing in Crosby’s band and as soon as he heard about it, he knew this device was the answer to his prayers. He immediately bought one to further his home recording experiments.

Using the Ampex tape machine it was possible to make complex sound on sound recordings with far less distortion compared with cutting discs. If you made a mistake you could re-record on the same tape and start again. It was on this simple magnetic equipment that Les recorded most of his complex multi-layered hits in the following years. 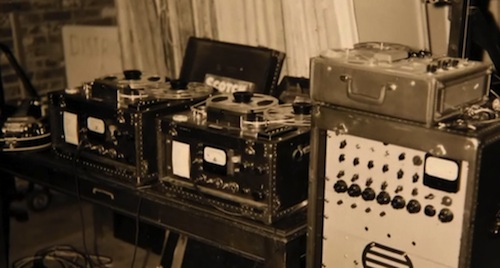 Magnetic tape recorders record and play back using a small electromagnetic device called a ‘head’. ‘Record heads’ create the magnetic signal that is captured on the tape and ‘playback heads’ read the signal and play it out again. Les soon realised that if you placed more than one record or play head side by side on the machine, you could create a tape recorder which could record and play back many tracks of audio at the same time.

In 1953 Les spent $10,000 (enough money to buy two houses in the 1950’s!) on a special-order 8-track machine (codenamed ‘octopus’), delivered in 1957, which was the most advanced piece of recording equipment ever built at that time. To put this in context, the Beatles only got access to 8-track recording at Abbey Road in 1969 – over 10 years later!

However, further innovation was still required: just because Les had an 8-track machine, it didn’t mean he could perform what we think of as modern multi-track recording. The early machines could only be in play, or record mode; not both at the same time. Plus, even if you could get past that problem, the play and record heads sit in a different positions, meaning that the resultant tracks would not quite be in time with each other!

Les realised that a machine whose play and record heads were synchronised, and on which you could individually select which tracks would play and which record would open up the door for the true multi-track recording we know today, so he modified one of his machines to work this way in 1949. Ampex developed Les’s idea into a technology called ‘Sel-Sync’ which put them ahead of the competition as the most advanced recording company in the world.

Unfortunately Les’ recording career had been displaced by rock and roll by the time the machine was delivered and none of his recognisable hits were produced on the Octopus.

Sound on Sound vs. Multi-Track

At first glance it might not be obvious why multi track offers such a big advantage over sound on sound recording.

Sound on sound recording is a lot like mixing a cocktail: it’s easy to put the ingredients together, but impossible to unmix them if you make a mistake.

With sound on sound if you record ten parts and then realise the guitar you recorded second was too quiet. or had a bum note, your only choice is to start again from scratch. With multi-track recording, the guitar is on its own track and can easily be adjusted in volume, or recorded over with a new take (called an overdub) at any time, providing far more flexibility and a much more forgiving recording process!

We can see here again that (as with his contributions to the design of the electric guitar) although a skilled engineer in his own right, Les was usually the catalyst rather than the creator of the the many inventions that he helped to popularise.

In my opinion more than any of the technologies that he helped to develop, Les’ most important contribution to music was his attitude to recorded sound.

Take a listen to one of his classic multi-track hits, Tiger Rag:

Before Les Paul, recording was a mechanism to capture a live performance. Any editing or production that took place was simply to make the end product as close to the ideal live experience as possible. I believe Les was the first to see the recording process as an end in and of itself, where the goal was to create sounds that existed in your mind – even if they never did (or could) exist in the real world.

Hopefully you’re beginning to appreciate just what a key role Les Paul played in the development of modern music. In the next part of this series we’ll be investigating Les’ impact on the world of guitar effects.