Home » Career » Listen to the Changes: Notes on Confidence from a Professional Musician

Listen to the Changes: Notes on Confidence from a Professional Musician 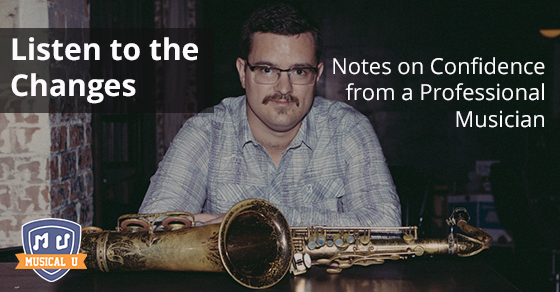 This week at Musical U, we had the honor of sitting down for a chat with Mike Moynihan. Mike is a professional jazz saxophonist who hails from Tucson, Arizona. We’re thrilled to introduce you to him.

Mike had some great thoughts on confidence, practicing, and really “making it” as a musician. From effective self-criticism, to putting in “the work,” to always keeping a performance mentality, Mike really had us thinking we should be thinking and practicing more like him!

To learn more about Mike and his music, visit his website or stop by his Facebook page.

MU: Hey Mike, it’s nice to meet you! Thanks for taking the time to chat with us.

MM: Thanks for inviting me. I’m excited to do this.

Getting to Know Mike

MU: Can you tell us a little bit about your musical background?

MM: Well, my dad was an amateur saxophonist and he taught himself to play. I remember being a toddler and playing in my dad’s instrument case! But yeah. It was the weirdest thing. It was the one time in my life when I had a decision to make and I just didn’t even think about it. I knew what I wanted to do! This particular time, when it came time for band to start, I just knew I wanted to be in band and I naturally chose the saxophone because my dad played it. So yeah, I just started doing that and then, my dad actually introduced me to some great music early on.

When I was about 11 or 12, he got me a John Coltrane album, the album Blue Train. He had some other jazz CDs in his collection. He had some Miles Davis and Charlie Parker compilation discs. I ended up getting into all those guys and started taking lessons a bit before I went to high school. I just got into playing jazz and studying the great players, learning how to play from listening to recordings and transcribing from recordings, and playing along to back-up tracks with my teacher.

It was really cool because in Tucson at the time, for many years, there was a jazz jam session every Sunday night at this place called Old Pueblo Grill. I remember going there when I was quite young, maybe 12, and sitting in for the first time with real musicians and playing jazz in front of an audience. And after that, I just started going there every week. That’s one of the big ways I learned to play, was jamming along with them.

Being a Musician: Practice and Confidence

MU: Wow. That’s pretty awesome that you had such an early, unique start! What would you say is your favorite part about being a musician?

MM: My favorite part about being a musician, I think, is that I get to express myself and I get paid for it. What better job could you have and someone is like, “That’s worth money!”? It just fits me. Musical expression is just a great fit for how I operate.

MU: On the flip side, what’s the hardest part about being a musician?

You know, self-criticism is a double-edged sword. In one respect, it’s essential for being a good musician. It’s having a critical ear and being realistic with yourself and not allowing oneself to get away with lazy mistakes or things that can be corrected with a little bit of effort.

But at the same time, it’s so easy to have that blade swing the other way and cut into yourself.

It’s so easy to look at other people who are amazing musicians and compare yourself to them. You think, “Oh, I’ll never get there,” or, “I’m just not good enough,” or, “If only I didn’t do this, then I would be that good.”

And the weird thing is, the best type of work that we can do is [not be] as harsh with ourselves, but [be] rather gentle with ourselves in our criticism.

You just do the work and you let it go. You take the time and put in the work, and then at the end of it, you just let it go. You don’t overanalyze it. Whatever that means, whatever work feels like to you; however much of a workload a person can tolerate, all the other things kind of fall into place. Then the criticism kind of becomes irrelevant. At the end of the day you can say, “Well, did I do my work?” And you feel like you did or you feel like you didn’t.

But now, the hardest part is just making money. (Laughs) It’s still something I’m figuring out. I make about half of my living playing and teaching and the other half I have to work a “day job.” This kind of ties back into what we were saying about self-criticism. In the past I might have been critical and said, “I’m not successful because I don’t make all my living by playing music.” Now, I think more about, well, “What does my life feel like? Am I enjoying my life?” And my answer is yes, I really am enjoying my life and I get to play a lot, multiple gigs a week and travel in bands.

MU: Did you ever think about quitting? How did you handle it? Why didn’t you quit?

MM: You know, I’m going to be honest and, yes I do sometimes. I think people who say, “I never think about quitting and anyone who thinks about quitting should just quit…” I think that’s bogus! I think everyone has doubts at some point in their lives and their careers. For me, it’s different because I actually did quit a couple of times.

I tried quitting music twice. But both times I tried to quit, I just couldn’t stop playing. I always returned to the music. It always did something for me that nothing else can. For me, when I think about quitting, I think, “Well, I already tried quitting so I might as well keep going!”

To people who are thinking about quitting, I would say, beware of quitting because you might regret it. But at the same time, if you really want to try something different, I don’t think there’s anything wrong with that. And if you come back to it, it’s really like you never quit in the first place!

MU: How do goals figure into your practice time?

MM: That’s a good question. For me, it’s really loose. I had a goal to play “outside” the harmony of a tune when I’m improvising. I never really felt comfortable doing it. For me, I just like to dive in. I started playing stuff and just noodling around on it and I would put on tracks and try to implement it into my improvisation.

For me, goals do factor in really heavily because I don’t see the point in practicing if you’re not working on something that you’re not good at. I mean, if you’re just playing stuff you’re already good at, I feel like that’s kind of a waste of time and time is really valuable. You’re just retracing your footsteps.

For example, I just recorded an album and I realized I need to work on my intonation. So, I’m working on that now and every time I practice, I focus on that. I’m listening for it a lot now. Goals are essential to effective practice.

For many years, I kept a practice journal. I think for new players, they’re extremely helpful. I try to get my students to do it and they don’t always do it! (Laughs) It’s really great to track your progress and it’s like a bookmark. Sometimes it’s hard to remember what tempo I was practicing at or something…

MU: What’s the hardest part about staying motivated to practice?

MM: I’ll just go the simple route and say “distractions.” Lately I’ve kind of revised my feelings about that. There may be areas of your life that haven’t been nurtured… Sometimes, I don’t think practice is the most important thing in life. I don’t think people should be super hard on themselves about not practicing, but you do need to practice. That motivation has to come from within, from your love of music and your curiosity about the art.

MM: Definitely. I would say, first, practice things slowly and then slowly build up your tempos. Slow and deliberate practice. And I would say isolate problems. Go after those problem areas.

Also, I recommend take frequent breaks! I think there’s some research that shows people can’t focus for really long periods of time. Don’t quote me because I don’t remember how long it was! But if you feel your focus waning, go get a cup of coffee, get a snack, or just take a little bit of a breather. I think that’s really important.

Finally, I heard a quote once: “I never practice, I always play.” How can I be musical in my practice? How can I make it like I’m actually performing in my practice? Always be seeking that performance mentality.

A Note of Advice

MU: What advice would you give an aspiring musician?

MM: This is a little bit of a cliche, but follow your passion and your curiosity. Never be afraid of taking a plunge into something you’ve never done before. Also, don’t be afraid of sounding bad. I still struggle with that! I don’t practice piano as much as I should because I’m afraid of sounding bad. You’re going to sound bad sometimes – everyone does. Even amazing players, sometimes they just have a bad night. It’s kind of a requirement to sound bad in order to sound good. It’s like a spectrum.