Continuing our playing-by-ear series, we’re very pleased to welcome the first of our “home team”, Easy Ear Training author Nick Long, to share his experiences learning to play by ear. 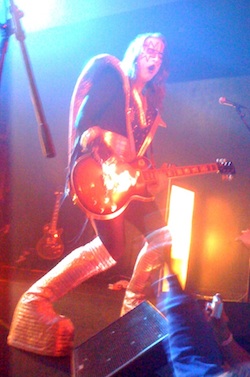 I decided I wanted an electric guitar aged 14 after seeing a video of Ace Frehley playing a solo on a flaming Les Paul.

Just about every member of my family had taken up and subsequently abandoned a musical instrument so it wasn’t taken very seriously. Having been denied one for Christmas I went out and blew my savings without telling anyone.

Like most people outside the realms of the classical musician I’m largely self-taught and my formal musical education was limited to a few guitar lessons. Guitar was just a hobby for me until I got to about 17 at which point it became a minor obsession. I would practice for up to 6 hours a day improvising and playing along to my favorite records.

The guitar magazines I read were completely focused on technique and speed. Not how to understand music, or improve your ears. I had progressed through the works of Hendrix and Zeppelin happily enough, but the next step on this path was “shred” music like Steve Vai, or Racer X.

I realised I was learning music that left me cold because it was the only way I knew how to proceed.

I tried learning exotic scales from magazines called things like “Lydian” and “Phrygian”, but they were just finger excersises devoid of musical meaning.

I was listening to Miles Davis and Aphex Twin, but as a musician I felt like a pentatonic blues hack. I’d hit a wall with my playing and inevitably my obsession drifted back to a hobby. I stopped playing in bands and one day I realised my guitar had been in its case for 6 months.

Uninspired and needing a new challenge I joined a band on drums — the only problem being I didn’t know how to play them! I decided I was in need of professional help and started taking lessons. Learning drums was brilliant fun, but the most unexpected side effect was how it transformed my guitar and bass playing. My drum teacher would have me transcribe drum parts and for the first time I started to really listen to rhythm and phrasing.

For me opening my ears has been one of the keys to re-awakening my interest in making music.

I don’t tend to do a lot of formal ear training exercises, but I work as hard as I can on building my transcription skills and playing by ear. It’s not something that only comes in handy for learning new songs, I think it’s the key skill for improvising with other musicians. Being able to understand what other players are doing lets me respond and bounce ideas off them organically without having to stop and explain things. I’ve also found that it helps to get your technique to the point where you still have some brain space left to listen while you are playing.

I work as hard as I can on building my transcription skills and playing by ear. It’s not something that only comes in handy for learning new songs, I think it’s the key skill for improvising with other musicians.

Improving my ears like this has proved invaluable for playing in covers and function bands. Typically you find yourself having to play a set of 30 or so songs… and if you are anything like me you will have a mental blank at some point during the evening! Letting your ears guide you so that any mistake is only made once is infinitely preferable to grinding to a shuddering halt, or blundering along in the wrong key because you can’t hear the problem.

If I could offer one tip to musicians it would be: before you rush out and buy the sheet music, try to transcribe.

When I read interviews with my favorite musicians they always seem to mention learning by trying to work out riffs they heard on the radio. I’ve realised that it’s not just a particular technique they learned — it’s the ability to listen and understand music.