Home » Instruments » Is It Still worth Learning to Play an Instrument?

Is It Still worth Learning to Play an Instrument? 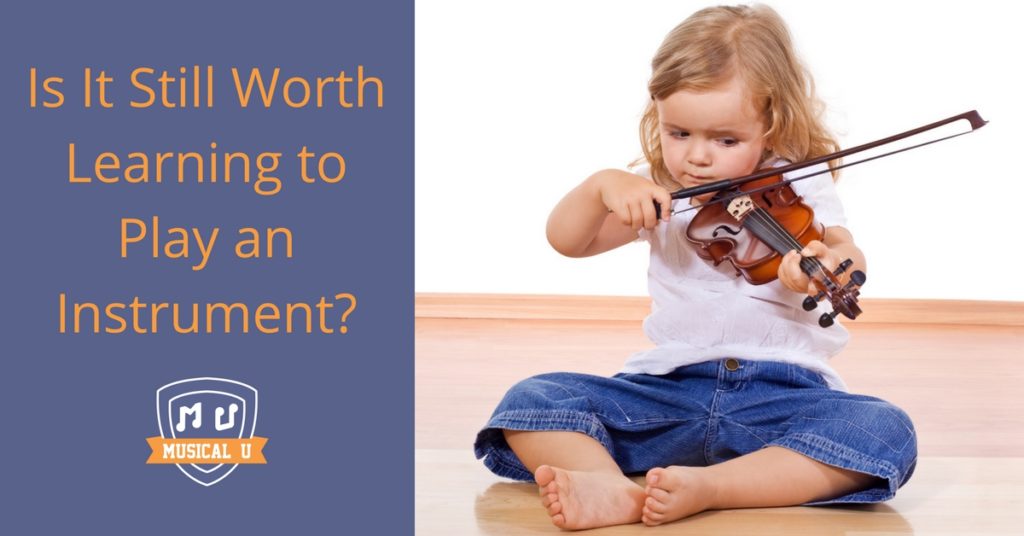 The golden age of technology has brought with it new ways of thinking, behaving, functioning, driving, reading, listening to music – you name it. Everything is just the tap of a finger away.

One concern with the rise of technology is the lack of certain skills in younger generations, such as talking to one another in person. Socialisation is proven to be an important part of a healthy mind, and no amount of texting or calling can measure up to the benefits of something like a good, old-fashioned face-to-face conversation.

The same thing goes for physically playing a musical instrument.

The positive impact of playing an instrument is far more complex and far-reaching than most of us realise. Here are just a few reasons why picking up an instrument rather than a laptop is far more beneficial for the brain.

Research has shown that when children learn to play music, their brains begin to hear and process sounds they couldn’t otherwise hear. This helps them develop “neurophysiological distinction” between certain sounds that can aid in literacy, which can then translate into improved academic results.

Learning how to play an instrument and engaging with music, in general, helps students excel in the following ways:

The younger children are when they begin playing an instrument, the longer the benefits will last.

You don’t need to be a kid to reap the benefits of playing an instrument. It’s never too late to start learning. Many people find happiness, excitement, and relief when listening to music – particularly while working – which often results in increased productivity and efficiency. Thus, it’s no surprise to learn that making music maximizes these mood-lifting benefits.

While listening to music provides temporary stress relief and an improvement in mood, learning to play an instrument can lead to more long-term results. For example, science has shown that playing an instrument can reduce chronic stress by “switching off” the body’s stress response of releasing the hormone cortisol.

Though we can’t actually physically see the hormone release being reduced, we can certainly feel our moods begin to elevate.

Listening to music and playing a musical instrument can also help improve memory.

According to an article from The Telegraph online magazine, “New research suggests that regularly playing an instrument changes the shape and power of the brain and may be used in therapy to improve cognitive skills.”

There continues to be more evidence that musicians have organisationally and functionally different brains compared to non-musicians, especially in the areas of the brain used in processing and playing music.

The benefits of being a musician are well-rounded and quite possibly endless. There is value in creating music with technology; but it should not be a replacement for the real thing, just as texting shouldn’t replace face-to-face time.

The actual movement of the hands, the patterns of breath, the physical feeling of holding an instrument – these all make up the importance of music.

What are your thoughts on the brain benefits of playing an instrument?