Home » Podcast » Is Aiming For Perfect Actually Holding You Back?

Is Aiming For Perfect Actually Holding You Back? 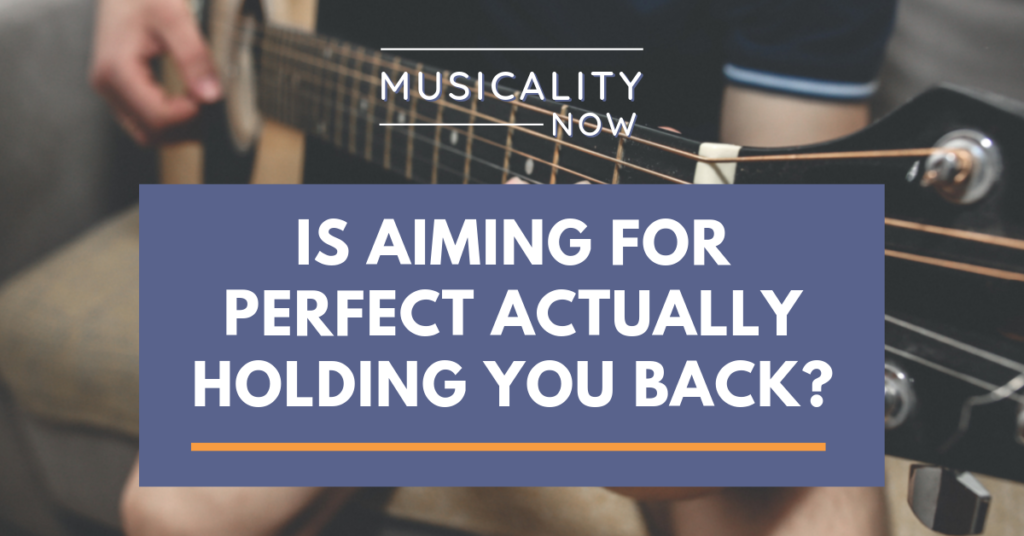 Is it possible that aiming for perfect is actually holding you back from your true potential as a musician?

In this video we’re going to explain the two meanings of the word “perfect” – and why focusing on playing the “right notes” might actually be a mistake. Stay tuned!

Hi, my name’s Christopher, I’m the founder and Director of Musical U, and this is Musicality Now.

Have you been aiming for perfection in your musical life? If so, you might want to be very careful about what you mean by the idea of perfect. Does it mean “the best it can be” – or does it mean “with no mistakes”?

Believe it or not, there’s a big and important difference there…

We feel like we “should” aim for perfection because we take it to mean “try to do your best” – and there’s no problem with that. But in fact the word “perfect” means “without mistakes or flaws” and when we strive to be our best we often inadvertently also take on this idea that we must make zero mistakes – which is absolutely not the same thing!

Trying to always do your best and improve does not have to mean aiming for perfect in the sense of zero mistakes.

Music is an art, art is subjective. Meaning how “good” or “bad” it is depends on each person’s own judgement.

Therefore it fundamentally can’t be “correct” or “perfect” – so why are we aiming for that?

Often what we subconsciously assume perfect to mean is “technically perfect”, meaning playing like a robot – but that’s not musical.

There are two problems with that.

Firstly, it tends to go without saying that the “right notes” means “the notes that someone else has composed and put on a page”.

Now I wouldn’t for a second belittle the importance of repertoire or all the incredible music that’s been written…
But we absolutely should reject the notion that this is what music “is”, or that this is the only meaning of “the right notes”.

That’s a topic for another day: choosing the “right notes” for yourself. For today, let’s move on to the second problem with learning to “play the right notes at the right time”.

And that’s that it ingrains in us that mistakes are bad and we should be ashamed and disappointed in ourselves when we make mistakes.

Now again, I want to be clear: I’m not saying this viewpoint is entirely wrong.

Clearly if we want to learn to express ourselves with an instrument we are going to need to learn to make that instrument play the notes we intend for it to play.

So it’s not the idea of playing what you intend to play that I’m taking issue with.

It’s that the attitude to mistakes tends to spread way beyond its usefulness.

But if you let that spread further it causes more problems than it solves.

When I look back on my own music education as a child, although there was plenty of good there which I’m grateful for, it was 100% oriented towards note-perfect performance of written repertoire and passing exams by not making mistakes.

As a result I saw music as almost exactly analogous to taking a test in mathematics or science. You study hard so that you make as few mistakes as possible. The best people are the people who make fewest mistakes.

This led to me being utterly uncreative – and in fact believing myself incapable of creativity.

In retrospect I can see clearly that it dramatically limited my enjoyment and fulfillment in music.

Does that sound familiar at all?

Every one of the greatest musicians we admire have made mistakes. And what’s important to note is that many of them have not only made mistakes during the recording sessions for the albums we consider the best of all time – they have chosen to leave those mistakes in the recording!

There’s a duff piano chord in the intro to Roxanne. There’s coughing in a classic Pink Floyd track and a telephone rings in a Steely Dan hit. There’s badly-timed starts in vocals by The Who and Nirvana. We’ve covered The Beatles extensively on this show and the backstories to their best songs are often riddled with happenstance and accidents that they chose to leave in.

Did they do that because they were lazy and couldn’t be bothered to go back and play the right notes at the right times?

They did it because they understood that music is a creative art-form where there are ultimately no “right answers”.

They listened to their performance not asking “did I play this technically perfectly?” but “did I create good music?”

As a result they were able to look past the apparent “wrong notes” and “mistakes” and see that what they’d created was still great art. In spite of or perhaps even because of those so-called imperfections.

Nature is not perfect. It’s beautiful, it’s elegant, it’s incredible – but is it “perfect”? Not really. So why are you aiming for perfection in your music?

Here’s the thing: not only is perfection not attainable, and not something you should expect or want to attain – aiming for perfection is actually reducing your chances of becoming great.

When I interviewed award-winning composer Sabrina Peña Young on this show she called herself a “recovering perfectionist” and explained how she’d had to unlearn much of the “play no wrong notes ever” mentality she’d grown up with in order to grow into her full potential as a musician.

And who do you think improves faster as a song writer? The person who spends six months trying to perfect one song, or the person who writes one song every day for six months, learning from each one, improving each aspect of their song writing with each song? Hit songwriters who’ve appeared on this show such as Alex Forbes, Matt Blick and Mark Cawley all emphasise the importance of regularly writing and finishing songs as the way to improve, not endlessly polishing every single one to perfection.

There’s another huge hidden danger of perfectionism: Not only does it bring your progress grinding to a halt, it can also set you up with a very fragile mindset in music, destroying your confidence.

As top symphonic horn player Marc Gelfo put it in his masterclass here at Musical U: “Perfectionism in practice leads to debilitating stage fright”.

We’ll talk in another episode about recovering from mistakes during a live performance, but I’m sure I don’t need to explain why a perfectionist attitude can trigger stage fright and lead to a vicious cycle of being nervous, making mistakes, being more nervous for your next performance, and so on.

So aiming for perfection is not necessary to do your best.

It’s holding you back from learning quickly.

And it can produce a very fragile and vulnerable sense of identity as a musician.

Start to throw away any perfectionist tendencies you might have – and you’ll be amazed how much faster you can improve, and how much more enjoyment and fulfillment you experience in music.

Now I know you might still be thinking “If I want to be the best I can be, I need to aim for perfect”

So I’ll leave you with a question to ponder: Can you aim for perfection – without requiring or ever even expecting perfection?

And if so, what effect might that have on your musical life?