An Introduction to String Instruments

by Musical U Team | Instruments | 0 comments 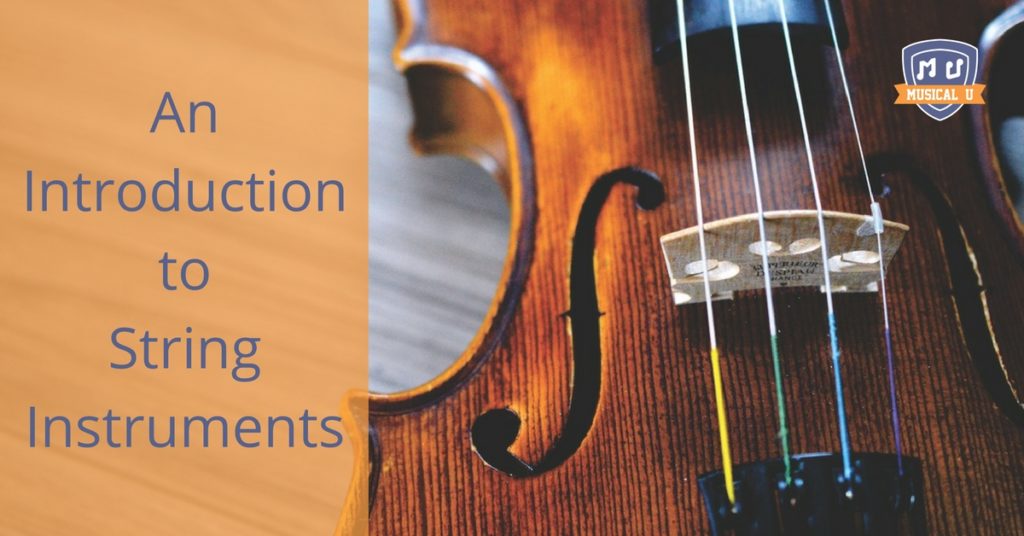 What does a piano have in common with a ukulele? Amazingly, they are both part of the same family called string instruments.

As you might already know, musical instruments are divided into several “families,” each characterized by a distinctive feature. As the name might suggest, string instruments produce sound from vibrating strings. Although the concept behind it is relatively simple, it has given rise to countless musical instruments over the last 3,000 years, each unique in its sound.

Ever considered playing a guitar, piano or ukulele? In this post, we’ll explore the nature of string instruments and what makes them so special.

A Brief History of String Instruments

Though a relatively young instrument family, the oldest string instruments date back to ancient Mesopotamia, where lyres were often used in burial ceremonies over 4,000 years ago. Even though the application of these instruments was mostly religious, they soon extended their purpose to entertainment and leisure.

In the medieval period, Middle Eastern rebecs (a 3-stringed instrument from the period that was played with a bow) marked a revolution in regards to instrument shapes and their strings. It quickly became the favorite music maker in tea houses of the Ottoman Empire and influenced the earliest version of a violin. Other early variations of string instruments were also developed during this period. One of them was the gittern: a 4-stringed precursor of the guitar that used catgut or silk for its strings.

During the Renaissance era, string instruments were being made of roughly the same materials they are today. They were much more rigid and reliable, and gradually, the process of creating them became a form of art. For instance, The Lady of Tennant is one of the most expensive violins ever made – crafted by the Italian luthier Antonio Stradivari in 1699. It was sold for a record $2,032,000 at an auction in New York.

The most recent major changes to string instruments came at the middle of the last century with the advent of electronic guitars and violins. These innovations have led to lots of experimentation in music and the creation of new genres like blues, jazz, and rock.

The basic principle behind a plucked string instrument is pulling and releasing strings, which causes the strings to vibrate and emit sounds. The most representative instrument in this subcategory is the guitar.

The 3 major groups of plucked string instruments are lutes, zithers, and harps.

The lute family is the most well-known subcategory. It includes instruments like the guitar, balalaika, and mandolin, which usually consist of a resonating wooden body, a neck, and strings that run along the two.

The zither family is a variation of the lute family. The main distinction is the absence of the neck – instead, the strings run along the soundboard. Typical examples of zithers are the dulcimer, gusli, and kannel.

The harp family is the oldest group of string instruments, which dates back more than 4 millennia to ancient Mesopotamia. This family typically includes harps and lyres.

Bowed string instruments include instruments played by a bow rubbing across strings. Typical examples include the violin, viola, and cello. Even though these instruments are similar to lutes in terms of shape, some of them can assume sizes as big as 40 inches (like the double bass).

The third category of string instruments is based on striking the strings. The most well-known instruments of this group are the piano and the hammered dulcimer.

As the category names suggests, the creation of sound implies striking the strings with little hammers. Despite this heavy-handed action, the tones can be mellow and rounded. In fact, the use of hammers allows the piano to evoke a vast range of sounds.

String instruments make up an immense, varied, and unique family. They’ve never failed to amaze us with their mesmerizing sounds. 4,000 years of history has given us a beautiful form of art.

Do you play a string instrument? Would you like to?