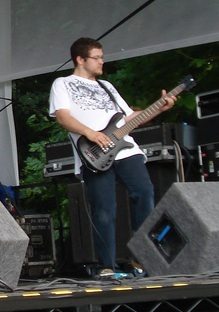 Greetings Ear Trainers! My name is Nick and I am a musician and broadcast engineer.

My personal musical odyssey began at 14 when I started playing the guitar. It wasn’t long before a hobby became an obsession and I joined the first of a succession of bands. For me collaborating with other musicians and playing for an audience is what music is all about. Over the years I’ve played Indie, Soul, Country, Heavy Metal, Punk, Post Rock and everything in between.

I love the challenge of mastering new instruments. Along with guitar I play bass, mandolin and even dedicated some years to playing the drums which will be the focus of my first sequence of articles. At the moment my main musical outlet is playing bass in my band Dark Energy (www.darkenergyband.com)

I’ve been involved with radio since university and spent much of my career working for the BBC designing and building studio and production systems.
Though I’m a qualified broadcast engineer I haven’t had a formal musical education. I’m not the kind of person who is interested in theory for theory’s sake, but as a self taught working musician I’ve found time and time again that I hit a wall that can be overcome with theory and ear training.

In my articles I hope to provide tips and advice aimed at the self taught gigging, or recording musician. Ear training has helped me to transcribe and learn music faster, sing backing vocals at gigs with bad monitoring, and produce better sounding demos and I hope it can help you to do the same!