Feel the Beat: What’s the Real Difference Between Human Drummers and Machines? 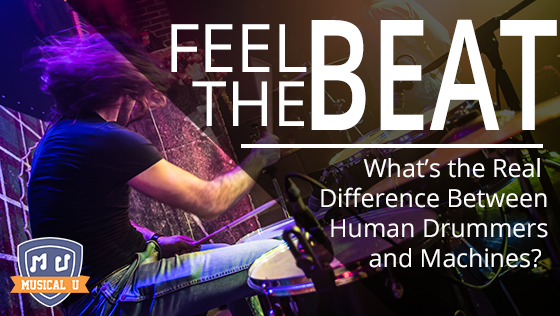 As our society’s reliance on modern technology increases, the world is beginning to witness a rapid surge in the presence of machines and robots in our everyday lives. Even in creative fields, such as music production, some artists are turning to drum machines in place of live drummers. After all, computers have the ability to create flawless, technically-perfect rhythms. Who wouldn’t prefer a robot to a live drummer?

As it turns out, people are actually attracted to songs created by humans because of the minuscule flaws they contain.

The Science Behind Imperfection

A recent study led by Holger Hennig, a German physicist at the Max Planck Institute for Dynamics and Self-Organization, concluded listeners naturally prefer songs that contain human error as opposed to unblemished computer-generated beats. These tiny imperfections created by human drummers are very pleasing to the ear due to their fractal rhythms.

A fractal is a never-ending, infinitely complex, and self-similar pattern. It is created when a simple process is repeated again and again in a continuous feedback loop. Fractals appear commonly in nature, such as in the pattern of a seashell or in the arrangement of the petals on a flower. For this reason, humans are extremely familiar with fractals, albeit on a mostly subconscious level.

Researchers claim that it’s because of this subconscious familiarity with fractals that listeners actually crave the patterns of imperfections created by human drummers.

When humans generate music, their deviations from perfection create a fractal. In simple terms, patterns of errors created by human drummers repeat themselves over and over throughout songs. Listeners find those patterns to be familiar and pleasing to listen to.

And — try as they might — computers just don’t have the ability to replicate these fractal rhythms.

Some producers have turned to “humanizing” functions in an attempt to add imperfections back into computer-generated music. However, these flaws are added randomly and ultimately do not follow the same fractal patterns that human imperfections follow. Researchers determined that listeners still prefer organically flawed songs created by humans as opposed to their digitally-altered counterparts.

What’s the scientific reason for our beat-based preference? Musical errors are simply not as pleasing to the ear if they occur randomly. They must follow the fractal patterns created naturally by human musicians to generate the full effect.

Some musicians are actually taking a step backwards from technology and working to reinstate the presence of live drummers into their music. Artists who produce electronic styles of music are also mixing human drum rhythms into their sounds in order to appeal more to listeners.

Despite the ever-growing presence of technology in modern society, it seems that human drummers aren’t going to be replaced by their robot equivalents any time soon. Even as drum machines and humanizing software become more advanced, it’s unlikely that they will ever fully be able to replicate the heart, soul, and energy of a live drummer — imperfections and all.

What do you think about the effect that technological advances are having on music production? Do you think that machines will ever have the ability to replace live musicians completely? Share your ideas in the comments below!

Want to improve your percussion or rhythm skills? Explore all the Rhythm training modules available inside Musical U.