How To Recognize Major and Minor Keys 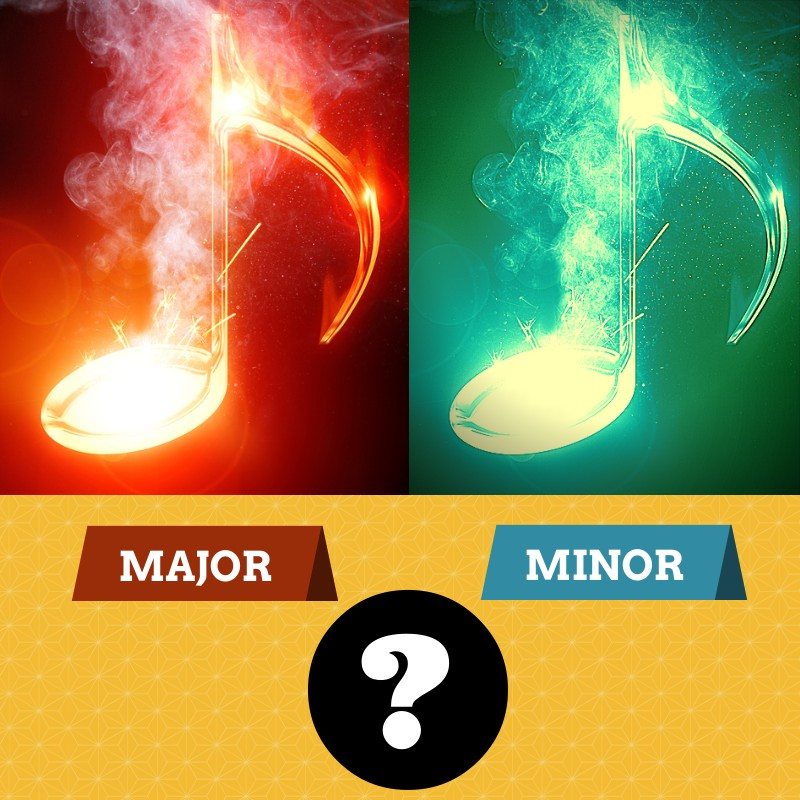 Recognising major and minor keys. It’s a basic skill and one many musicians and songwriters will take for granted, without ever stopping to think about it. But even those who can instinctively hear the difference may be confused or intimidated by the question: Is this song major or minor?

Let’s take a look at how you tell the difference. First of all:

The simple answer: a key is just a collection of notes you use when composing music.

“Choosing a key” means deciding which subset of the 12 notes you’ll use most in your song. Of course you’re always free to use any notes you like, regardless of key choice, and this can create some interesting sounds. But for the most part, you’ll choose a certain subset of the 12 possible notes and stick to those.

The notes you choose are used to compose the melody (or “tune”) of your song.

The “triad” (3-note) chords based on those notes will form the harmony and accompaniment of your song.

Example: the key of C, or “C Major” means choosing all the ‘natural’ notes – no sharps or flats. This is the white keys of a piano keyboard.

You can compose your melody using just these notes and it will sound nicely musical.

Constructing triads with these notes gives you the chords of C Major, D Minor, E Minor, F Major, G Major, A Minor and B Diminished which you can choose from to accompany your melody.

If you know a bit about music theory, you’ll have noticed that this is very closely connected to the idea of a scale: a collection of notes in a certain order. There is a close link between a song’s key and its scale. In the example above, playing all the white notes in turn produces the scale of C Major.

So how do you hear if a song is in a major or minor key?

Well, there is a huge wealth of books and articles on music theory which could explain all the intricacies of keys, scales, and chord progressions, and you could conduct a careful harmonic analysis of the song to determine its exact key and scale…

The first approach is very simple. Can you tell a major chord from a minor chord? Even if these musical terms are unfamiliar, the chances are that your ear knows the difference. Here’s an example:

 
Listen to each. Can you hear that the major chord sounds bright and happy, while the minor chord sounds dark, gloomy and sad? That’s the one fundamental aural skill you need to tell whether a song is in a major or minor key.

 If the song sounds bright or happy, uses mostly major chords and generally comes to rest on a major chord, it’s probably a major key. Note that most popular songs are in a major key.

If the song sounds dark and gloomy, uses mostly minor chords and generally comes to rest on a minor chord, it’s probably a minor key.

Here’s the slightly more advanced answer: Listen for the tonic.

The tonic is the note which the song’s key and scale are built on. For example, in a C Major song, the tonic is C.

There’s also the associated tonic chord, which will just be the major or minor chord built on that note. How to hear the tonic? Here are some clues:

As you begin trying to identify the tonic in songs, one simple way to train your ear is to play along with your instrument, trying different notes or chords, and see which one one best fits throughout the song. You’ll probably find a few that work well in different places in the song (you’re starting to transcribe the song!) but there will normally be one which always sounds like the safe choice, always sounds like the stable root of the music.

Once you’ve found the tonic note it should be easy to tell by ear whether the chord for that note is a major or minor one. Try playing each over the song – you’ll find that only one sounds any good!

Once you think you know the key, you can try playing the corresponding scale over the top of the song. You should find it’s a good fit for the chords in the song. Likewise, you can look up the chords for that key, and check by ear whether these are the chords being used in the song.

From there it’s just practice

The first few times you try this you’ll probably begin with an instinctive sense of whether a song sounds major or minor. Then try experimenting with your instrument trying to figure out the tonic. Once you confirm this you’ll find you can use the corresponding scale and chords to improvise over the song or transcribe it easily.

The more you do this the easier it will become and the more confidence you’ll gain. With a bit of practice you’ll find you can reliably tell whether the key is major or minor and quickly hone in by ear on the tonic, just needing a quick check on your instrument to make sure you’re right.

Easy improvisation, transcription and playing by ear all follow from there!