Home » Ear Training » Chord Progressions » How to Play Chords By Ear: A Roadmap

How to Play Chords By Ear: A Roadmap 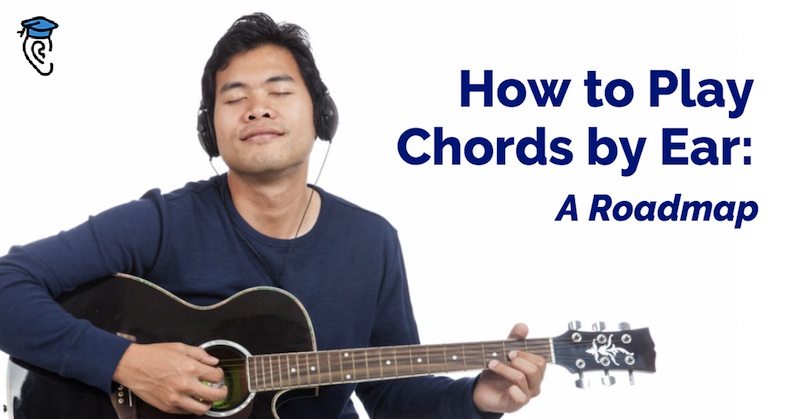 Have you wished you could hear a song and instantly know what the chords are? To be able to pick up a guitar or sit down at a piano and play along – or maybe improvise a solo over the top? It is possible to learn to recognise chords by ear, and if you take the right approach you might be surprised how quickly you can start doing it. 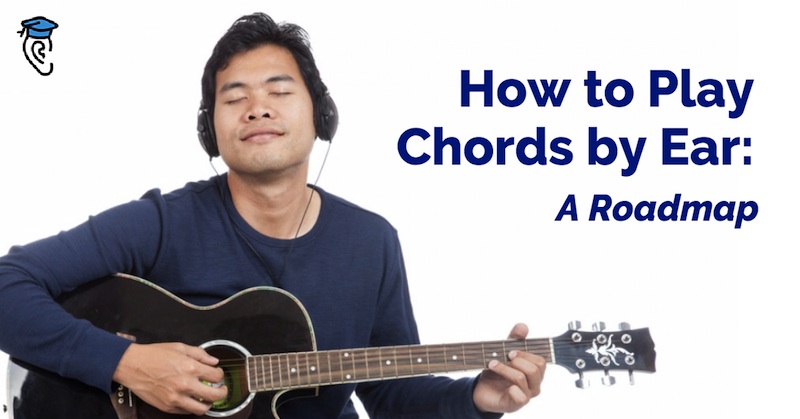 One common mistake when people try to learn to play chords by ear is to dive into chord ear training without first taking the time to understand the overall process and create an effective training plan.

Along with setting a suitable goal it’s vital to know the steps to get there, if you are going to have success in learning to recognise and play chords by ear.

At Musical U we use an approach called Roadmaps, which let you see how to reach that goal and then design your own personalised training plan which perfectly fits you. We have Roadmaps for playing chords and melodies by ear, developing your sense of rhythm, and in the next few months we’ll be adding Roadmaps for solfa, learning to sing, and learning to improvise.

This week we published a public preview of our popular “Play Chords By Ear” Roadmap, and in this article I’ll share an overview. Naturally this Roadmap works best if you are able to use the training modules inside Musical U which it features, but the overall approach is one you can follow for your own ear training even if you aren’t yet a member of Musical U.

Before we dive into the steps of learning to play chords by ear: What exactly is a “Roadmap”?

A Roadmap for your ears

When it comes to ear training, it’s important to have a clear plan. Even if that plan is going to change over time, following a thought-out route will greatly improve your chances of reaching your final goal. 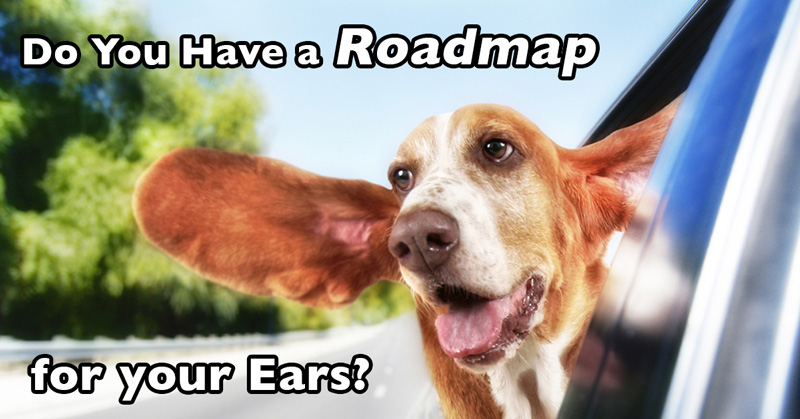 Inside Musical U we offer very personal help and support to all our members, but we found that often they were pursuing similar goals. Their Training Plan still needed to be unique and personal, but the “big picture” guidance they needed was roughly the same. That’s why we introduced Roadmaps.

What is an ear training Roadmap?

A Roadmap is designed to answer three questions:

By breaking the goal into distinct phases, explaining the requirements and outcomes of each phase, and recommending the specific training modules and exercises which will let you complete that phase, the Roadmap enables Musical U members to see quickly and clearly the answers to these three vital questions.

Like any “map”, they are a way to help you plan a route but they are not themselves a route or a training plan. Members use these roadmaps for inspiration and guidance, and then create their own personalised training plans with help from the Musical U team.

How to play chords by ear

The Roadmap for Playing Chords By Ear starts from the very beginning, assuming you know almost nothing about chords or chord progressions. In five phases it leads you from there to a robust and versatile ability to recognise chords by ear and play along on your instrument. 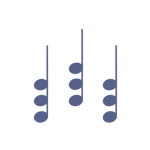 The approach is based on an insight about the most common chord progressions used in music, which allows you to very quickly recognise the chords in a large number of songs, without needing to learn to recognise every possible chord.

If you follow the Roadmap through to the end you will be able to easily and reliably play chords by ear on your instrument for thousands of songs in a variety of musical styles and keys. You’ll also be in a perfect position to take things even further, with jazz chords and more complex chords-by-ear tasks.

In this article I wanted to share the five phases, which are a sequence you can usefully follow yourself, even without joining Musical U. Of course if you do want to make it even easier on yourself, a Musical U membership gives you immediate access to the full set of training modules and instrument exercises recommended for this Roadmap, along with full Community access and ongoing personal support from the expert team.

Before starting to practice recognising chords by ear it is important to ensure you’re clear on the fundamentals. 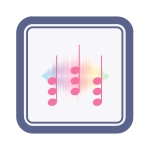 In this phase you will learn to understand how chord progressions work. What exactly is a chord progression, why are they important and what are the different types of chord used in progressions. You’ll also learn about the “shortcut” method which lets you dramatically accelerate how quickly you can learn to recognise chords in real songs.

With a fun and simple exercise you’ll get to know the Circle of Fifths which unlocks the structure of common chord progressions for you, and how to apply it directly on your own instrument. 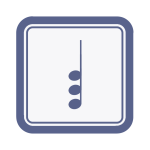 You will also start active ear training, learning to recognise major and minor chords by ear so that you can easily tell the difference when you hear them in a progression. This starts out easy, but once they’re put in different voicings or musical contexts it can become more challenging! It’s valuable to fortify this skill before moving on.

By the end of this phase you’ll know all the core concepts needed to play chords by ear, and have taken the first steps in training your ears.

You might think the next step is to jump into actual chord progressions, but actually there’s one more important phase first, which will ensure you don’t get frustrated or confused later on. 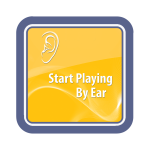 Playing by ear is one of the most misunderstood and confusing topics among musicians. Many think it’s something you need to have a special talent to be able to do. Others try to learn it with blind trial-and-error, producing very slow and tedious progress.

In this phase you’ll learn exactly what “playing by ear” really is and how it works. You’ll find out how to combine trial-and-error with active training to make sure you learn this skill as quickly as possible.

To make sure it’s not all abstract and theoretical you’ll also explore the “play by ear process”, seeing real tutorial examples of how a musician would go about playing a new song by ear.

By the end of this phase, playing by ear will no longer be a mystery. You’ll understand how it really works and see clearly how you can start doing it yourself.

Now it’s time to really dig into playing chord progressions by ear. To let you start applying your skills as soon as possible in your real musical life we start out with the simplest case: 3 chord songs. 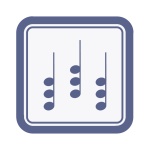 These 3-chord progressions are everywhere in music and in this phase you’ll learn to recognise them by ear, starting out with simple artificial examples, and gradually building up to real musical arrangements in a variety of styles.

As you practice recognising these 3-chord progressions you’ll also in parallel start playing through them on your instrument, and incorporating the progressions into your normal music practice. This ensures that your new play-by-ear skills are immediately useful in your musical life.

By the end of this phase, 3 chord songs will start jumping out at you in your daily life, and you’ll have those magical insights of just instinctively knowing what the chords you’re hearing are, and being able to reach for your instrument and play them by ear.

Exciting! But we’re not done yet…

After 3-chord songs, the most popular type of progression is, of course, the 4-chord song. Introducing the most common minor chord, this phase extends your skills to an even wider array of songs in various genres. 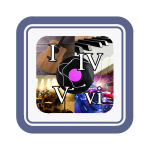 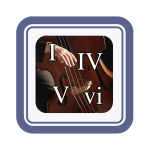 This is also the time to start listening out for the bassline in music, which often gives you a helpful clue as to what the progression is. With a dedicated training module you’ll learn to hear how different basslines can be used for the same progression, and how to recognise chords by ear using the bassline. Of course this is a great opportunity for bassists in particular, who can learn to improvise basslines by ear to match a progression.

By the end of this phase you’ll have extended your strong chords-by-ear skills to cover 4-chord progressions, unlocking an even larger number of songs in pop, rock and almost every other style of music. You’ll also have a new appreciation of the role of the bassline. 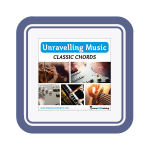 Up until this point you’ve mostly been training with artificially-created practice tracks. In Phases 3 and 4 these were full musical arrangements and you will have noticed yourself starting to identify progressions in the real music you hear each day. Now it’s time to complete your training by using real, full music tracks as your actual training material.

In this phase you’ll use real examples of 3- and 4-chord songs in a variety of musical styles, and learn to pick them apart by ear, recognising not just the chord progression, but also the details of how that progression is arranged and used, and other aspects which can affect your listening skills when it comes to real-life musical tasks.

Now that you’re getting proficient with 3- and 4-chord progressions you can also start to have fun beyond just recognising and playing the chords by ear. In this phase you’ll start using improvisation exercises to connect the chord progressions with how you can improvise melodies and even full accompaniment parts on your own instrument.

When you complete this phase you will know with confidence that you’ve mastered the most common chord progressions in music.

The approach described in this Roadmap has been developed over several years at Easy Ear Training and helped countless musicians go from zero ability with chords to being able to reliably recognise the most common chord progressions by ear. The Roadmap and accompanying training modules are now helping members inside Musical U develop these skills faster and more easily than ever before.

Whether you choose to become a member and get access to the full Roadmap and set of modules, or you prefer to follow the approach above in your own way, I hope it will help you quickly develop the ability to recognise and play chords by ear. It’s a lot of fun, and an important step to becoming a capable and versatile musician. 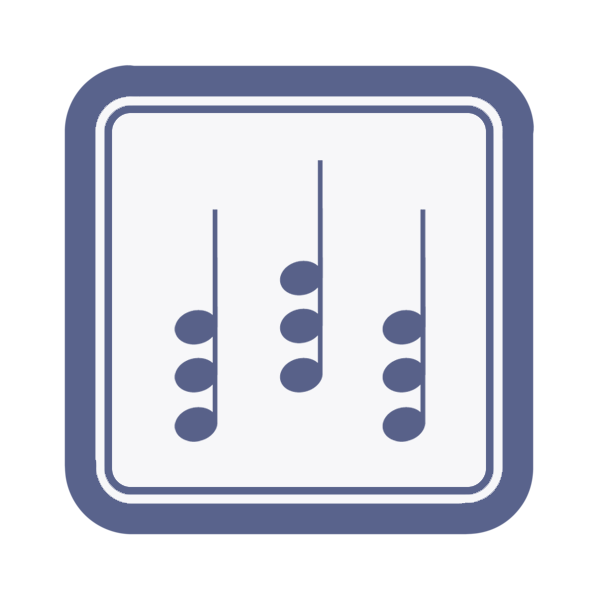