Home » Instruments » Guitar » How to Improvise on Guitar: 3 simple steps

How to Improvise on Guitar: 3 simple steps

Improvisation is an essential guitar skill but one which can seem very intimidating at first. As already covered in this series on learning to improvise, it is possible to learn improvisation and in a simple step-by-step way.

Whether you’re playing lead guitar in a rock band, the guitarist in a jazz trio or a budding song writer who wants to improvise to help inspire creative new melodies and arrangements of your songs, learning to improvise in guitar should be an important focus for you.

Let’s look at a simple 3 step process you can use to go from “I can’t improvise!” to being able to pick up your guitar and knock out killer riffs from nowhere confidently and reliably. 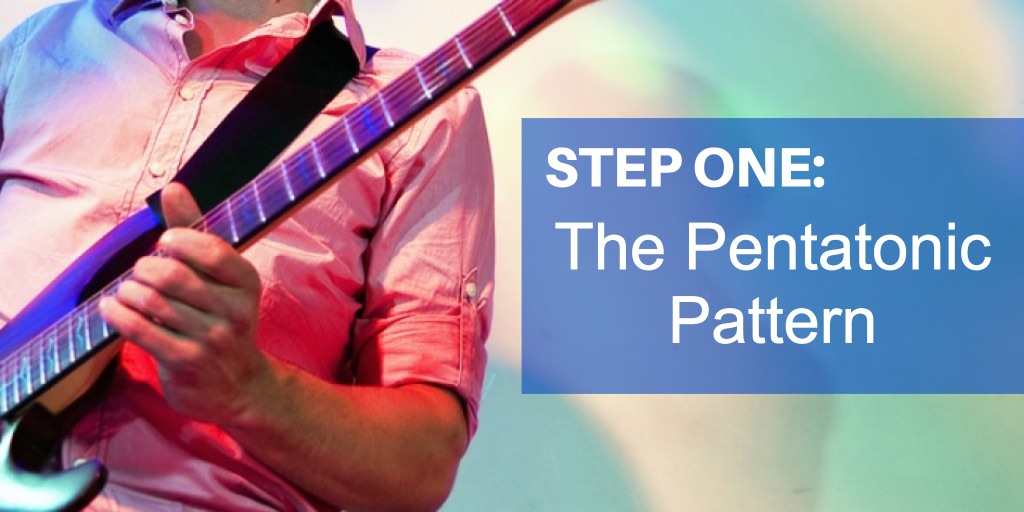 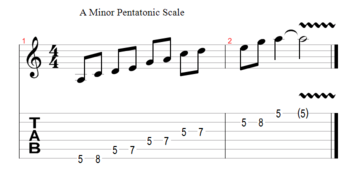 Listen to the A Minor Pentatonic Scale

Practice playing this pattern up and down as a scale, across all six strings. Pay attention in particular to where the root note is in each octave.

The beauty of using fretboard patterns like this for guitar improvisation is that you don’t need to start from scratch learning to improvise in different keys. In fact you can simply shift the same pattern up and down the neck of your guitar and immediately play the scale in whatever key you want!

Let’s not get ahead of ourselves though. Begin by choosing one key to practice with. You can either choose a song you like or use pre-recorded backing tracks to solo over. Try searching YouTube for e.g. “rock backing track” and you’ll find plenty of options!

Tip: Classic blues music is particularly suitable for this! Try the 12-bar blues songs from this list of classic blues tracks or these blues backing tracks:

Make sure you know where your minor pentatonic pattern should start to be playing in that key. For example if you’re playing in A Major you’ll want to start your pattern with the root note on the fifth fret of your bottom E string (because that’s an A note).

Play the song or backing track and start by just walking up and down the scale in time with the beat, one note per beat. Then try some experimenting. Instead of continuing straight up and down the scale, start to vary the notes you play, back and forth, exploring around the pattern. Make sure you still play only the notes in the minor pentatonic pattern though!

Listen for what sounds good. Start to play around with the rhythm too, making notes shorter or longer. Listen carefully, trust your ears, and try to learn which parts of the scale and rhythmic patterns sound good with this song.

As you do this you’ll probably start to have moments of realising “Hey! That sounded pretty good!”. You might also find yourself identifying notes that seem to match up with the melody or other instrument parts in the track. Make note of these, as they’ll help your solo to sound more “musical” and less “random”.

Remember the advice from before: record yourself. Then listen back with two questions in mind:

As you practice more and more you will find that answering question 1 results in the answer to question 2 becoming better and better.

Once you feel you’ve learned all you can from one song or backing track, pick another and repeat the process. 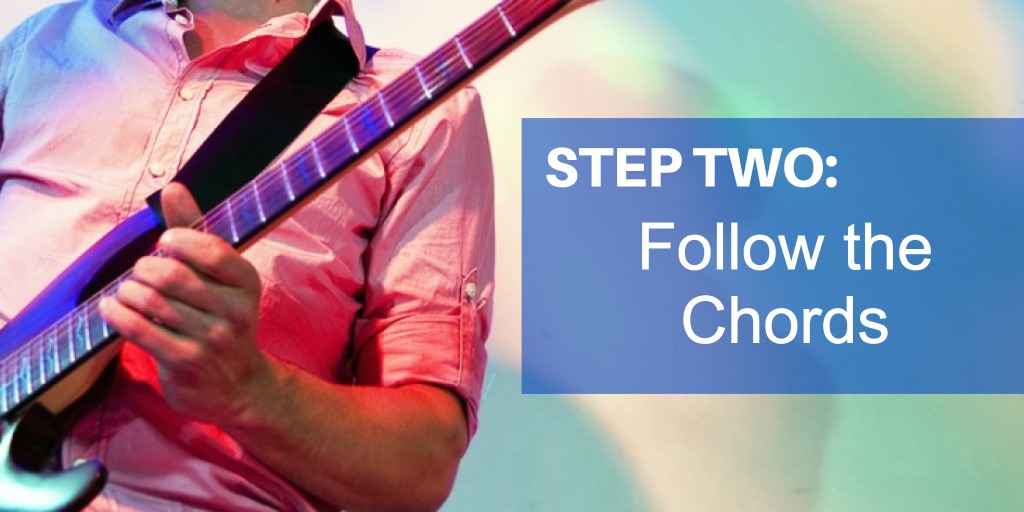 Okay, so you’ve been practising for a few weeks now. Your fingers are fluid on the minor pentatonic pattern. Your solos are starting to sound fairly musical but you don’t seem to be getting much better.

It’s time to learn the next step: Adjusting your solo to match the chord progression.

There are two parts to this. Knowing what chords are being played and learning to match your improvisation to them.

Here’s the ideal: you hear a song and immediately know what the chords are and how to solo to match.

This is an important skill to learn, but we don’t want to get too distracted from the true goal of learning to improvise. So here’s a shortcut: For now, just look up the chords to the song you want to improvise with. If you’re using a backing track it probably came with information on the chords used. If you’re using a recording of a song, try searching a site like Ultimate Guitar to find out the chords.

Once you know the chords played in the track you’re soloing over, it’s time to match your solo to the chords.

Match your improvisation to the chords

Your goal is to play notes which match the underlying chords well. This will make your improvised solo sound like it fits the song much better than the simple fixed-position fretboard pattern approach used in step one. It will give your listener those moments of “Ahhh!” satisfaction when you land on the important notes of your solo.

So how do you do it? Here are two simple ways:

You can learn much more about the second approach in this article on playing by ear using chord tones. 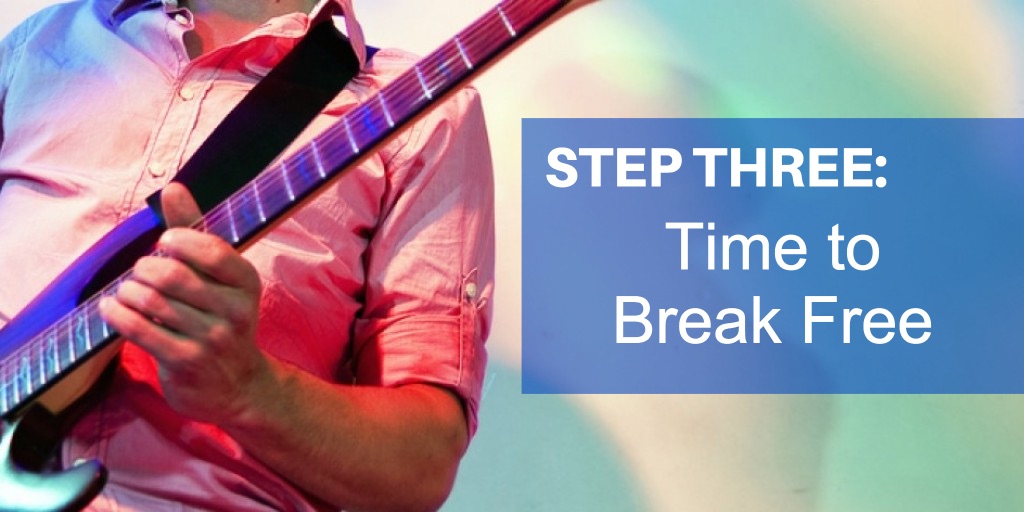 At this stage your solos should be starting to sound pretty good! You’re feeling free in which notes you choose and which rhythms to play, and your improvisations sound like they match up well with the music. Great! You are improvising on guitar.

An important thing to note is that many good guitar improvisers actually stop here. You can go a long way with just the techniques described above, particularly in certain genres like blues.

However if you want to be truly free in your improvisation you must go one step further and break free of the patterns and rules you’ve relied on.

Of course you can’t just make the leap to total freedom! You’ll end up playing nonsense.

Take it in two phases:

Phase one: Expand your toolkit

You’ve learned to improvise using the minor pentatonic fretboard pattern over I-IV-V-vi chord progressions. The next step is to go beyond both of those two things.

You’re still following the rules and relying on patterns, but you will start to feel more and more free to improvise over whatever song comes your way. By studying more music theory you learn to understand what’s going on in a greater variety of music.

Of course the key is to keep listening carefully and trusting your ear, so that you can recognise these chord progressions and know which pattern (and which notes in that pattern) will sound best.

Then you’re ready for the next phase:

The more you expand your options for improvising the more easily you’ll be able to move from one pattern to another, from one approach to a different one. More and more you’ll realise that you almost don’t need those crutches any more, you just instinctively understand the connection between the notes you choose and the music you’re improvising with.

Different musicians will describe it differently. Some master improvisers will tell you they still think carefully in terms of the music theory, rules and patterns but it happens lightning-fast as their fingers fly across the fretboard. Others will tell you that those things have become second nature and they barely need to think at all as they improvise.

Either way, this is the ultimate goal: to feel the whole guitar neck is your playground and that you can automatically, easily, instinctively pick out the perfect notes for a powerful solo.

Those are the three steps I would recommend for learning to improvise on guitar. Of course there are other processes you can follow, but this one will let you start sounding pretty good very quickly and provides a logical path from the basics to total freedom.

How long will it take? That’s really up to you. With daily practice, careful ear training and a supportive community with access to expert help you could breeze through steps one and two in just a few months and be onto the final phase of expanding your toolkit to the full wonderful world of music.

If you’ve ever wished you could improvise on guitar, I hope this tutorial has helped you see how simple it could be to learn. So grab your guitar, study up on that pentatonic pattern and don’t be afraid to sound bad at first. You’ll be amazed how quickly those awkward random wanderings up and down the scale start to sound like exciting and interesting guitar solos. Have fun!