Home » How To » Performing » How to be a More Expressive Musician

How to be a More Expressive Musician 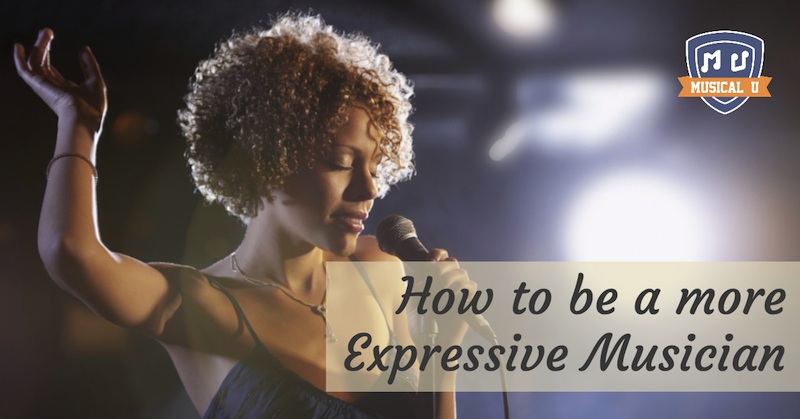 When you think about artistic expression, what do you think of? Do you think of painters and sculptors with their unique pieces of art which have deep meaning behind them? How about the fashionistas that make Lady Gaga’s clothing? Do you ever think about expression musically?

That seems simple enough. So why exactly is mastering the use of expression so important to a musician? What makes good expression so essential for making good music?

The Importance of being Expressive

Expression is important because it clarifies in the audience’s eyes and mind how the piece is supposed to make them feel.

Here’s another example, from my own musical life: I have taken voice lessons in college for two semesters, and one of the songs that I had to sing is “Danny Boy”. It is a very melancholy song about a son who is leaving for war, and leaving either his mother or his lover. There has been some speculation on which one it was.

The words portray the loneliness and the ache of loving someone who is far away. Then it goes deeper into sadness by saying that the woman may be dead and that Danny will come to her grave and whisper that he loves her and she will sleep in peace until he also dies and goes to be with her.

This song is clearly quite sad. If I sang the whole song with a smile and bounce, and with joy I would not be clearly communicating how the audience should feel about the song. It would be a bit confusing if the words were sad but my expression was happy.

Another reason that expression is so important is because it helps the audience to be engaged in your song. It helps to make the piece interesting.

If you are singing or playing a song and you just sit there with dead eyes, poor posture and a look on your face that says “I’m not really into this whole thing,” chances are that people are going to feel uncomfortable – or even bored out of their minds!

When a person is expressive with their face and has an attitude that commands attention, the piece comes to life. They are taking over the role of that character. Going back to the example of “Danny Boy”, when I sing that song, I have to take on the role of the lover (I take this role because I don’t have kids myself) I become that woman. I express the song as if I wrote it to Danny. My body language, face and use of my instrument (voice) tell the story of a broken-hearted woman who has to bid her lover goodbye, possibly forever.

With all of this being said, I’m sure your question is “How can I become more musically expressive?”

We’re going to look at four ways you can do exactly that and bring a new life and power to your musical performances. The first way you can be expressive is the biggest one. Stop letting yourself be hindered by what other people think of you. There is always a degree of fear when you are performing publically. For some people it is greater than others.

When you fear people’s judgment, you put yourself in bondage. Remember that when you are performing, you have a purpose. Maybe that purpose is to inspire others. Maybe it is to help you get a job. Maybe it is to just share your talent. Whatever it might be, that purpose is hindered when you let the fear of what other people think of you outweigh the reason you are up on that stage.

Let go of that fear. Learn to turn criticism to your advantage. As long as you have fear in your mind, your performance becomes awkward or boring because that is all you can think about. As soon as you let it go you gain a sense of freedom. That is where expression is born.

Let excitement show in your body language. If you look dead and act like you don’t want to be there, you will make your audience uncomfortable or you will leave them feeling awkward. Be dramatic while you are making music and you will be more effective and so ultimately more successful as a musician.

The third way you can become expressive is to get in character. Become the part you are playing. You step into their shoes and understand what they are feeling and why they are feeling that way.

When I sing a song and I need to be in character, I sit down and list the qualities that make up their character. I sang a song in my first semester of voice lessons called “Christopher Robin Is Saying His Prayers”. It is about a little boy who is getting ready for bed. I had to take on the character of a child so I listed the characteristics of that specific child: that he was curious, imaginative, giving, loving and forgetful. Then for my performance I stepped into his shoes and became a child again.

Sometimes it’s not easy to get into character. It is harder with purely instrument pieces where there are no lyrics to make clear the meaning, and there are certain pieces where it is very difficult to list character traits of one specific person. However, you can still list the emotional traits of the song. Is it sad? Is it mellow? Is it intense? How about joyful? List the characteristics of your piece and then act accordingly.

The final way to be expressive is the most simple one: How does this song make you feel?

For example, is there a melancholy spirit about it? Think about Adele’s song “Hello”. It has a feeling that is longing. She is longing to talk to her former lover about things that went wrong in their relationship. She is reaching out for him, but he never responds.

Let the audience see that with your body language, face and with the fact that you are in character. Relate the song to your own experiences and your own life and really feel what the music was written to express.

In this article we have looked at why expression is so important in music, and four ways that you can become more expressive in your musical performances. I would encourage you to look carefully at your music. Record yourself performing each piece and then listen back, asking yourself if you really expressed what the music is about. Ask other people for their honest opinions about your level of expression in music. If you feel that you aren’t expressive enough, try to apply each of these four tips.

While it is possible to go overboard with your musical expression, most aspiring artists under-express. So spend some time developing your own expressive techniques and you will quickly become a better musician who the audience truly enjoys listening to.