Home » Musicality » How musical are you? Find out with this new test!

How musical are you? Find out with this new test!

Researchers from the “Music, Mind and Brain research group” at Goldsmiths, University of London are embarking on a project to discover how musical people are – including those who don’t consider themselves musical at all!

In collaboration with the BBC Lab UK, they have developed a simple 25-minute test which you can take online to discover how strong a sense of musicality you have.

The research hypothesis is that people without any level of musical training will be able to do very well – and in some cases just as well as formally trained musicians who take the test. They think it’s possible that people develop a strong sense of music just through everyday exposure to and appreciation of music; even if they’ve never considered themselves a musician.

(You’ll need to register with the BBC website if you haven’t before – it’s quick and easy!)

The test is in seven short parts. Three ask you various questions about music, what it means to you, how much training you’ve had, and so on. Four are interactive musical tests, which ask you to do things like tap along with a song, or arrange short clips into groups that go together musically.

But before you start worrying that you’ll have to whip out your instrument, or brush up on your singing – there’s no need, as the test focuses on aural skills. Dr. Daniel Müllensiefen, one of the lead researchers on the project, explains “Musical performance is one aspect of musicality but by far not the only one – and maybe not even the most important one.”

At the end of the test you’re shown your scores for each of several dimensions of musicality, including “enthusiasm for music”, “musical perception” and “emotional connection”. You can explore each of these to find out where your scores come from and what they mean for your relationship with music. Part of the purpose of the study is to determine which of these dimensions develop together with aural or instrumental training, by comparing the interactive test results with the survey responses. 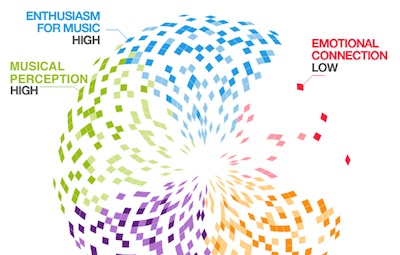 An example set of results from the musicality test

You’re also given suggestions of things you might enjoy based on your results. For example, score high on “Musical Enthusiasm” and you might get told that Radio 3’s Music Matters show is a good fit for you.

But can learning about your current level of musicality help you improve?

Dr. Müllensiefen advised us that this will depend on your interests, motivation, life situation and so on. “Basically: develop further what you are good at, and/or improve what you are bad at – if you think it is worth it.”

Dr. Lauren Stewart, who leads the project with Dr. Müllensiefen, normally specialises in researching the rare conditions (some caused by damage to the brain) which can actually cause people to be fundamentally incapable of musical appreciation. For example, people who cannot remember simple melodies, distinguish instruments by sound, or detect differences in note durations. However, this current project is looking beyond this tiny subset of the population, to consider whether the traditional mindset of “you’re either musical or you’re not” has any real basis – or if the majority of people are actually selling themselves short musically. We asked Dr. Müllensiefen why society has this black and white view of musical ability:

“People tend to focus on the musical skills they don’t have and take for granted those that they already possess. So, it’s a matter of bias in self-perception and the perception of others. Also, some people have had the chance to develop their musical talents and interests which others didn’t.”

One factor underlying this bias is the question of whether musicians are born or made. Dr. Müllensiefen notes “this is a very big topic (and if you’re interested you should consider signing up for our MSc in Music Mind and Brain). The short answers is: genes, environment, and motivation are all important – in unspecified proportions.”

The project isn’t just about broadening society’s notion of musicality – in fact, there is a particular scientific goal underlying the research. Although our understanding of music and the brain has developed substantially over the last 40 years (particularly since the arrival of fMRI imaging), research is often based on comparing “musicians” with “non-musicians”. The current project seeks to provide insight into the full spectrum of musical ability, so that more sophisticated analysis will be possible in future neurological research. Dr. Müllensiefen is actually developing a measurement for the level of musical sophistication and experience in the general population, dubbed “Gold-MSI”: The Goldsmiths Musical Sophistication Index.

Here at Easy Ear Training we strongly believe that music is accessible to everybody, and can be discovered at any stage of life. Far too many people miss out on the joys of music due to falsely believing themselves unmusical, tone-deaf or that they “can’t sing”. Just as some people struggle with maths at school and forever after consider themselves “bad at maths”, some people get poor musical teaching when young or hear discouraging comments about their singing, and decide they simply don’t have any musical ability.

The attitude of this new research project is hugely encouraging. It will be some time before we learn if the results support the hypothesis, but the message is one we at EasyEarTraining.com can certainly get behind:

People without a formal musical background can nevertheless be strongly musical, and we are all capable of appreciating music deeply – whether or not we can play a guitar or carry a tune.

What do you think? Is there a “middle ground” between musicians and non-musicians? Can you be musical without having had any training? Leave your comment below.

And if you do take the test – be sure to come back and let us know your results!