5 Top Tips to Learn to Play By Ear (Steve Myers) 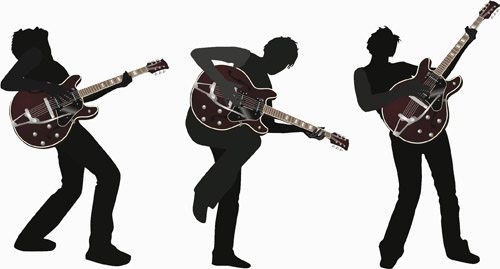 This week we have another terrific guest expert joining us to share their perspective on learning to play by ear.

Several years later in high school, I had my first encounter with guitarists who could ‘play by ear’ at a high level. These guys would work out new songs fairly quickly after hearing them just once or twice. They would jump in and start playing with a group on a song they had never heard before. If a string slipped out of tune during a performance, it was quickly corrected – as they continued to play. But the thing that impressed me the most was the way they could improvise endlessly over all kinds of chord progressions and musical styles. These players had a deep understanding of music, and at the time their skills seemed like magic to me. I had no idea how they were able to play that way – spontaneously creating great solos one after another – but I knew that I wanted to do it too. I spent a tremendous amount of time and energy trying to learn how to improvise music, but came away with very limited results. Eventually, I became frustrated and gave up, believing that the ability to play by ear was a talent that you had to have been born with.

The thing that impressed me the most was the way they could improvise endlessly over all kinds of chord progressions and musical styles. These players had a deep understanding of music, and at the time their skills seemed like magic to me.

More years passed, and although I continued to play guitar occasionally, I found that I didn’t have much motivation to practice on a regular basis. At some point, though, I came across a mail-order course for ear training and music theory, and decided to give it a try. The course turned out to be long, tough and very tedious at times, but it finally started me on the path to developing my ear. At the same time, it opened up a whole new world of musical understanding for me that has made playing much more fun and exciting.

I’ve since come to the conclusion that all of the skills which go into playing by ear can be developed, often to a far greater extent than we realize. There are many ways to build these skills, and it’s up to you to experiment and find what works best for you, given your particular musical goals.

There are certain strategies, though, that I’ve seen used to some extent by just about every proficient ‘ear player’ I’ve ever met, and that I would recommend to others who wish to improve their musicianship:

Your voice is an important link between your instrument and the music you hear in your mind. In order to do just about anything musical by ear, you must be able to sing simple melodies in key. Some people can do this effortlessly, especially those who grew up in environments where they were surrounded by music and encouraged to sing from an early age. If this is not your case, then you may have to work at it a bit. Begin by learning how to match pitch and then proceed on to the tones of the major scale. You don’t need a great singing voice or vocal technique – you’re just trying to sing the right pitches.

It’s up to you to experiment and find what works best for you, given your particular musical goals.

2. Break things down into small chunks

To play by ear, you must develop a specific set of ‘soft’ skills, such as aurally identifying scale degrees and chords. For each of these skills, it helps to work in small units. For example, if you want to learn how to work out a melody by ear, start by trying to identify common melodic patterns consisting of just three tones. Eventually, you will be able to hear a three-tone major arpeggio as a single ‘chunk’ of information, without having to worry about each of the three tones separately.

Some patterns occur frequently in music

Once you can recognize small chunks of melody, harmony or rhythm, you should notice how certain chunks often precede or follow certain other chunks, in much the same way that certain words tend to combine into common phrases. These patterns are everywhere in music – melodies and chord progressions almost always contain sequences comprised of common patterns. Once you have internalized these patterns, you will become much better at figuring out songs by ear, harmonizing new melodies, and even remembering the chords to songs.

4. Transcribe and play along

When learning a new song, instead of going straight to the tablature or sheet music, try instead to first work out some of the music on your own. Even if it’s just a single chord or pair of chords, those are the initial ‘small chunks’ that you can start to build upon. As you do this with many songs over time, look for the patterns: are there any three- or four-chord sequences that appear in multiple songs? Try playing along with the recording, even if it’s just small bits and pieces. When you get stuck on a particular note, stop and sing it. If you can’t figure out a particular chord, see if you can sing the individual tones of the chord.

Fun is something that is generally not associated with ear training and music theory. It doesn’t need to be that way, though. Most of the skills you need for playing by ear are ‘soft’ skills – they are primarily mental skills that require flexibility and pattern recognition. And the best way to develop soft skills is to play and explore, to give yourself challenges that are rich in variety and make you stretch a bit.

The point is to experiment and enjoy the process. You want this practice to be more like play – something that you look forward to doing each day.

Steve Myers is the founder and chief enthusiast of Tokyo-based Theta Music Technologies, a developer of music learning software. His latest project is Theta Music Trainer, a set of online games for ear training and music theory practice. Learn more at trainer.thetamusic.com.

Thanks, Steve, for some great tips on developing your aural skills and learning to play by ear. If you want to follow through on Steve’s suggestions we recommend trying out the range of Theta Music games, such as: