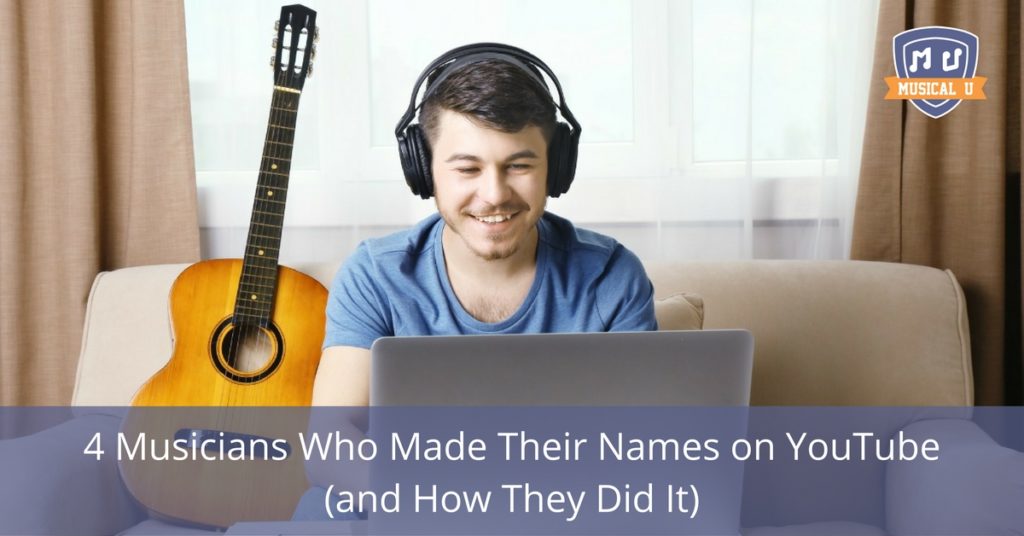 There’s no one, single way for a musician to “make it” in this day and age. Some of today’s most popular musicians have been discovered while singing at a local dive bar, while others have hustled and self-promoted until they secured the agency connections they needed to succeed. But there’s no doubt that one of the most unique ways for an aspiring musician to stake their claim to fame is through YouTube.

Check out these 4 inspiring examples of big-time musicians who made their names on YouTube (and how they did it).

Perhaps the most well-known example of a YouTube artist turned superstar, Bieber began posting home recordings of his musical talent to YouTube when he was just 12 years old. Due to his young age, his mother helped him upload videos of his performances of R&B covers. His YouTube channel quickly began to accumulate a large following.

In 2007, a marketing executive from a recording company stumbled across one of Bieber’s YouTube performances and liked what he heard. Soon after, Bieber was invited to record several demo tapes and was signed to Raymond Braun Media Group (RBMG), a record label co-owned by Usher. With the help of his new industry support system, Bieber released his top hit “Baby” in January 2010. The rest is history.

Though Ed Sheeran began recording music in 2004, it wasn’t until he began using YouTube to market his work in 2010 that his fame skyrocketed to the level of stardom he’s now known for.

In the early days of his career, Sheeran began playing small gigs and opening for other performers in London, sleeping on friends’ couches and even on the subway. In 2010, he moved to LA and performed at open mic nights around the city. He was discovered by Jamie Foxx, who offered him a place to stay in his home.

That same year, Sheeran upped his online media usage and began sharing more videos of his performances with his growing fan base. His YouTube videos opened several doors for him, including a tour with the rapper Example and eventually, his first record deal.

Abel Tesfaye, better known by his stage name, The Weeknd, is one of this year’s biggest musical sensations. Like the other talented artists on this list, The Weeknd got his start in the music industry on YouTube. In December 2010, he uploaded three songs – “What You Need,” “Loft Music,” and “The Morning” – to his YouTube channel under the username xoxxxoooxo. The videos contained nothing more than black and white still photos and a mysteriously captivating voice.

The internet reacted almost instantly to the viral YouTube hits and his followers began working together to learn more about this R&B singer who had appeared out of the blue. Since then, The Weeknd has developed a large fanbase and received numerous awards.

Sultry singer-songwriter Lana Del Rey has come a long way since the days of filming and editing her own YouTube videos, when she was still just Lizzy Grant. Eager to make a name for herself, Del Rey relied on open mic nights and small-scale record label deals to start her career, all of which eventually fizzled out and didn’t lead her to the fame she craved. So, she took matters into her own hands.

In 2011, Del Rey uploaded the video for her song “Video Games” to YouTube, using a mixture of home videos and clips from the internet for background graphics. The video became a viral hit and her next YouTube video, which featured her song “Blue Jeans,” was just as successful. Shortly after, she was signed to a new record label and released her hit album, Born to Die.

Getting discovered through YouTube may not seem like the most typical way to find fame as a musician, but we have a feeling this trend is only going to increase as the volume and variety of digital content continues to grow.

Can you name any other musicians who made their name on YouTube?