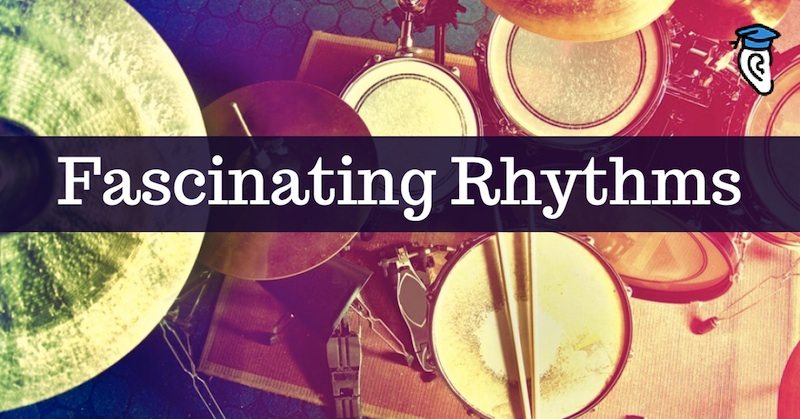 The world would be a very boring place without interesting rhythms that move our bodies, make our souls dance, and unite us all through incredible beats. Let’s go on a rhythmic journey and explore fascinating rhythms from some popular songs. 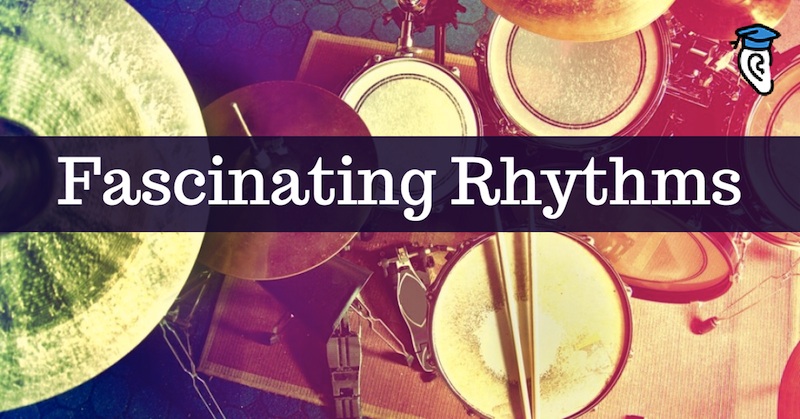 The Power of Latin and African Rhythms

There is a lot of cross cultural influence between Latin music and African music. Many of the most popular Latin rhythms and instruments, melodic ideas and idiomatic sounds, first crossed the ocean centuries ago as African slaves made their way to the New World, which included the Caribbean islands, North America, and South America. Mixing with local musical traditions and European influence, Latin music evolved into its own unique sound, but never forgot its rich African roots.

In this fun 80s Latin pop classic, Gloria Estefen incorporates Afro-Cuban rhythms, polyrhythms, syncopated jazz piano, and brass pops to make a funky dance tune. Much of Latin music is based on the son clave, which is a constant two measure rhythmic pattern that is repeated throughout the song.

In addition to the son clave, “Conga” uses many syncopated rhythms, 16th note runs, and rhythmic patterns common to Latin jazz. Follow the example below and listen for the complex rhythms.

World renowned phenomenon Shakira combines African, Arabic, and Latin music in many of her international hits, including “Waka Waka”, which was written for the 2010 FIFA World Cup. The song was based on a traditional military song from Cameroon telling the story of the soldier in an oppressed society. “Waka Waka“ incorporates a traditional drum beat with syncopated rhythms.

You can follow along with this piano score example of “Waka Waka”. Observe the syncopated rhythms and repetitive beats.

Piano Arrangement of “Waka Waka (This Time for Africa)“ by Shakira

The Magic of the East

For complex rhythms and tunes that literally make you want to get off your feet look no farther than Bollywood-inspired songs like “Selfie Le Le Re” from the Bajrangi Bhaijaan Soundtrack. Combining traditional tabla rhythms with contemporary dance music and rap, “Selfie Le Le Re” is a fusion of the old and the new, reaching international fame.

“Selfie Le Le Re” from the Bajrangi Bhaijaan Soundtrack

In the background you can hear many traditional rhythms played on instruments like the tabla drums, percussion instruments used commonly in the music of Pakistan, India, and Nepal. Played sitting down, the instrument resembles Latin bongos, with a large and smaller drum played by the fingertips. It can take decades to master the tabla, with many drum masters starting as apprentices in childhood.

The rhythms of the tabla are spoken, and players will often memorize long strings of syllables before playing. For detailed insight into Hindustani Classical rhythms and tabla music, as well as a discussion of Indian rhythms and melodies, check out raag-hindustani.com.

Complex rhythms found in Western music combine in many popular rock tunes, sometimes borrowing heavily from jazz improvisation traditions and modern classical music to create tantalizing rhythmic beats. The popular Rush tune “Tom Sawyer” breaks into an addictive synth rhythm, interspersing various time signatures like 7/8 with the usual 4/4 within a short span, leading to a trippy but most incredible classic.

Follow along with this drum transcription and observe the different time signatures at measure 34. For most of us, this drum part is a bit intimidating, not to mention the forever moving beat 1. Notice how the snare tries to play close to 2 and 4, but the 7/8 time gives the rhythm a little bit of a lilt. Try to tap out the steady beat or count aloud with the example. Can you do it?

Played in 6/8 time, “Drive in, Drive Out” by the Dave Matthews Band has a repetitive guitar riff over a basic drum rhythm. Check out the drum fill below or move on to Jelly Note to try out the guitar part. (Note, in the Jelly Note transcription, the tune is written in 3/4 instead of 6/8 time, which slightly affects the rhythmic accuracy.

“Drive In Drive Out” Drum Lesson

Practice “Drive In, Drive Out”

Now that you have explored fascinating rhythms from around the world, take time this week to practice your favorite tunes. Want to try another fun song? Check out the resources below for more great practice. Learn the rhythms and incorporate them into your everyday practice or add them as you improvise with your band or write your next hit song.

What’s your favorite fascinating rhythm? Share a link in the comments below. We’d love to hear from you!