Home » How To » Performing » Constructive and Destructive Criticism 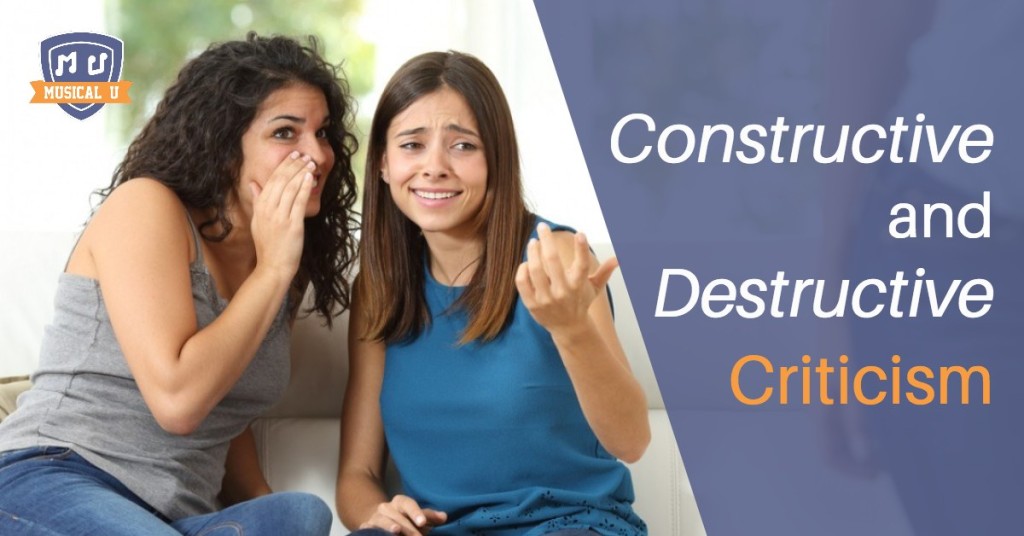 A while ago EasyEarTraining.com published an article dealing with “How to Handle Criticism”. This is a great article and I recommend reading it. I will be mentioning a few things from it but today wanted to share my own experience and perspective on the subject.

This comes from also what I have seen myself in students and musicians I know, and also the stories we talk about.

At times I am not sure we realize both the power we hold in our words and attitudes towards each other and the direction changes it can cause in others.

Think of a sailboat. The person navigating the sail boat has to know how to manipulate the wind to make their vessel continue on a forward direction. However, enough changing winds and rough seas and the boat can capsize.

I would personally hate to know I have caused someone’s passion and dreams related to music be capsized by my words and actions towards them.

So what of our words. Is it really all that big a deal? They are just words and sometimes you just have to be honest. Okay, honesty is a good thing but who are your words benefiting more – you or the person you are sharing them with?

According to an article in the New York Times we are twice as likely to remember negative comments versus positive.

Now take that and think about our words when we comment or critique someone’s musical ability.

I remember a powerful photo someone put on Facebook once. The words were formed into the shape of someone choking a child. That is exactly what it can feel like.

We all have had negative words thrown at us and it does at times feel like having all the joy strangled out of us. The younger we are the more effect it has on us. Words can kill a person’s self-worth and self-identity. It seems to me we can let those words really change our direction in life. It is these words and comments that we have no control over which are tossed at us that hurt the most.

The younger we are the harder it is, because when young we don’t talk about them.

What we do is record them in our internal ledger book which gradually itemizes all the negative words inside us and affects our view of our own self-worth, self-image, confidence, ability, etc… I have seen this work its way out in my life and in others.

The kind of destructive input we’re talking about can be verbal (destructive words), but it can also be shown through the way we treat others (destructive actions).

In school I played trumpet in band. A buddy of mine also played and was great. In 6th grade he could already play a triple-octave C and practiced his rear off. During that year we went with my Dad to hear the legendary Maynard Ferguson. The next day at school my friend told me when he got home he practiced all night. This guy was motivated and inspired! Then in 7th grade we got a new band teacher. He had decided that anyone playing good trumpet should play French Horn. He focused on us guys in the 1st section. None of us had any desire to touch the French Horn. Nothing against the instrument but we were kids and we didn’t want to play French Horn, we wanted to play trumpet. For some reason the director decided to possibly “punish” us by putting us all in last section.

The only way we could get back to first is by challenging anyone in front of us. Well, once again we were kids. To us we felt we were being criticized (in action) for our ability, so something must be wrong with our playing.

First, we felt we had done something wrong so we were embarrassed and didn’t tell our parents because we felt we were in trouble. Now we had to challenge everyone to get back to where we thought we had already proven ourselves? For two of us we did for a while but we both got tired of it and settled for being in 2nd section. I would never again get to play in first section in band, yet in 7th and 8th grade they would hand me the solo sections for the first section who couldn’t do them.

So what of my friend who practiced and was inspired by Maynard Ferguson? During that time he went downhill. He never challenged anyone so sat in last section and last chair. By high school he had pretty much given up on playing trumpet in band, had become part of the party crowd and was consistently in trouble.

Looking back I can see that what that director did was take a kid who had ambition and inspiration and just destroyed it. I remember how the director handled things: it wasn’t just the destructive actions but destructive words. My friend went through a total 180-degree turn in his personality because of those destructive inputs.

Me? Yep, I was affected to. He used to always criticize my playing even though I was playing the solos. He even went as far as taking a kid who was very good 3 years behind me in school and had him play a solo I had been working on for a solo and ensemble contest. He had him do it right in front of me as I was working on it. I was torn down completely.

Once again, destructive criticism via actions. Do you think I cared any more about doing well on trumpet? Nope. As a matter of fact I found myself not caring at all. I ended up with a horrible performance and didn’t even care. At times I wonder whether if we’d had a director who actually cared about his kids where my buddy would be now and whether I might have kept on playing trumpet longer than I did.

I have someone very close to me who sang in choir and performed solos throughout school. They went to a solo and ensemble contest and for some reason one judge decided to tell them they had no pitch and couldn’t sing, and offered no “constructive” critique, just “destructive” comments.

After that my friend stopped singing and to this day they still don’t sing. Oddly though I have heard their voice when they think nobody can hear and their voice is beautiful. I would love to see them use it with confidence again some day, but only time will tell. Can you see how these actions and words have lifelong consequences? As they say, all actions produce a reaction. It’s like a line of dominos: when you tip over the first they all start tipping over as they get hit. Many times one negative action or word can tip other things, producing a downward spiral.

The sad thing is I know a ton of these stories. I’ve heard them as a friend and as a guitar teacher. I taught a handicapped woman years ago. After a period of given her lessons her mom had asked to talk with me. She thanked me for taking the time and encouraging her daughter because her first teacher told her she was a lost cause because of her handicap and would never develop. Thankfully they immediately stopped ongoing lessons with that teacher.

Whether as a student, a mentor, teacher, or friend we need to learn how to use our words and actions towards each other and those around us. We can inspire and encourage but if we aren’t careful we can literally destroy too.

Music is a wonderful gift and something that not only can bring enjoyment to those playing it but to those listening.

When offering our words we should think and re-think whether what we want to say is really worth it, and whether there is a way to say it without being demeaning and destructive.

What I love about Musical U is that it always stays positive in its approach. To help constructively and find solutions, instead of putting up walls to people’s progress.

To wrap up, there is a great saying that I feel we always need to remember and that is to “Do unto others as I would have them do unto me”.

Every person in Musical U and in our circle of friends and family has worth and unique ability that is special to them. We need to remember that when we think and see them, and act and speak accordingly.

To put this into practice next time you hear someone and you enjoy it, whether it be at a club, a church, on the corner, etc., go tell them that you did. No matter who they are, they will remember it. Maybe it will counteract some of those negative ledger lines and help them pursue their own musical dream.