Celebrating Year One: Musical U Members Share Their Stories

by Musical U Team | Musical U News, General, Planning and Goals | 0 comments 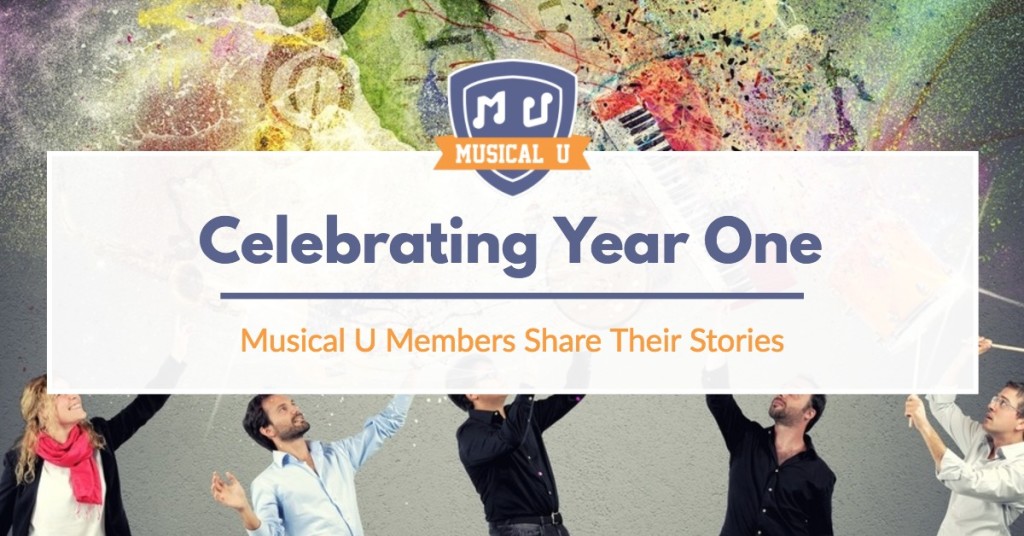 We’re celebrating with big discounts on Musical U memberships!

Today marks one year since we opened our doors here at Musical U and the team wanted to mark this occasion by acknowledging and celebrating all the achievements of our members this year.

Background: If you’re interested in learning about where Musical U came from and why it’s designed so differently to most music and ear training course providers and apps, be sure to check out today’s post over at EasyEarTraining.com.

In this post we’re going to give a quick recap of how the year went and what members have been up to, and then share some perspectives direct from members themselves.

Year One: A Quick Recap

In our first year we’ve had over 500 members join Musical U and improve their musicality. They’ve developed concrete skills in intervals, chords, rhythm, singing and more, with close to 3,000 awards earned for completing training modules. During the year we’ve made substantial improvements and extensions to Musical U itself. The team has introduced new features to make training easier, based on member feedback and requests. We’ve also been hard at work creating brand new training modules to target the topics our members told us they care most about. In fact we’ve nearly doubled the number of training modules since launch! There are now 41 interactive multimedia modules, covering 9 key topics in modern musicality.

One major improvement was the addition of Roadmaps which are our way of keeping training fully flexible to suit each member’s own needs – while providing a clear guiding path they can follow to learn major skills like playing by ear, singing in tune and having a good sense of rhythm.

Since the beginning we’ve emphasised community at Musical U because having a supportive team around you can make the difference between a musical spark fizzling out – or igniting into a roaring flame. Our Community Conductor Stewart took the reigns from Stella partway through the year, and between them they’ve helped to nurture a thriving community inside Musical U.

This year our members have posted in over 550 discussions, posting close to 4,000 comments on topics as varied as core interval recognition skills, how to prioritise when you have lots of music goals, fitting training in alongside a busy life, and the recent surprise hit: the “Death Metal Appreciation” thread!

Members also helped each other along, exchanging over 1,900 direct messages and posting replies on each other’s Progress Journals.

That’s why we decided to ask some of our members themselves to tell us a bit about themselves and their experience of Musical U so far. Jose G. (a.k.a. @josegochez) is a guitar player and singer from the United States. When he joined Musical U he wanted to become a solo performer but had been struggling with confidence about performing in front of people. He says:

What I like most is the nice and friendly community, the instructions and the information for improving. It’s really open and straight-forward.

I believe that Musical U is being run by people that really know what they’re doing, as they are great musicians too and have the knowledge and education to do this.” Britt P. (a.k.a. @Daerwen) joined our community lately and quickly became one of our most vocal members – not surprising since she’s a singer! She joined with a variety of singing goals along with some instrumental ambitions and told us that what she’d previously had trouble with was knowing what she should be working on without having anybody around to teach her.

“I joined Musical U because I had enjoyed some Easy Ear Training articles. I liked their simple and easy-to-use approach and it seemed like Musical U was very similar in that way.

My favourite parts of Musical U are the training section and its modules. Also that you can ask others to clarify and give you extra tips.” Aliki (a.k.a. @Waterzone8) is a singer and song writer who loves exploring new kinds of music.

“I was having some challenges with singing pitch and it was affecting my songwriting. I wanted to fix this so I checked out Musical U and I liked that it had a community.

Before joining Musical U I had never tried ear training exercises before and I was worried I would be dreadful at them and wasn’t sure if I needed to start at some level lower than absolute beginner!

However, I found that the modules contained a digestible amount of information, and they didn’t assume previous knowledge or experience but rather approached topics in a clear, systematic way :)

Since joining Musical U I have refreshed some of the theory I had read up on by myself and learned to identify half the intervals in a scale.

I’ve also been exposed to different music and ways of thinking, through the community and I have had a clear-cut goal and a plan I could stick to.

What I like most is the awards system and keeping a progress journal.”

Diana is a pianist who can read sheet music well but wanted to play by ear. She told us:

“I joined because I figured paying a monthly fee would be a helpful motivation in regular ear training practice. I also liked the format… very different from other online ear training sites.

Since becoming a member I’ve completed several training modules and am at work on several others. I’ve definitely improved in my ability to recognize intervals and that is very encouraging.

I like the variety of modules for working on various aspects of ear training and the encouragement and tips from the Musical U staff.” 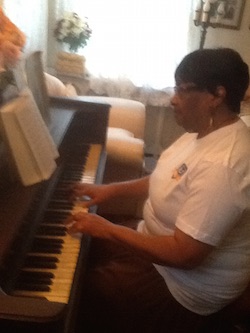 We recently featured @WoolC in our Member Spotlight series. She’s been a musician for most of her life but until joining Musical U still felt like she hadn’t reached her true potential in music. She told us:

“I like the ability to work at my own pace and in almost any place. I also appreciate the encouragement I receive and the input from other members and from the team.

Since joining Musical U my listening skills have improved. I am learning about new chord progressions and I’m actually writing songs! I’m beginning to fulfil my dream of being a composer!”

You can learn more in her full Member Spotlight. Fermin (a.k.a. @ferbie) is a guitar player and singer from Spain. He joined Musical U wanting to become a better all-round musician and get better at playing by ear.

“Musical U seemed perfect for I wanted to do, which is gain a full understanding of music in order to become a better all-round musician. Carol F. has played piano since age 7 but some early experiences with singing made her think she could never be a “real” musician.

“I joined Musical U because I thought it could help me become the musician I wanted to be.

Through becoming a member I’ve learned a lot about myself and how I (don’t!) learn. I passed the “not tone deaf” test, which was a great relief. I’ve done a lot of practice and reflected very deeply on how to improve.

What I like most about Musical U is the wide variety of resources, the camaraderie, and the ever-present, alert, ready-to-respond-to-stuckness team.

I really, really appreciate the positive attitudes, the encouragement, the honesty and the knowledge made available.” Kevin B. is a saxophone player from the UK who has been developing his interval skills to help with improvisation on the sax.

I now understand the value of ear training and am equipped with the knowledge & tools to fully appreciate and analyse music.

My ability to associate what I hear with the instrument has improved and I have now been able to easily transcribe a number of tunes that a few months ago would have seemed daunting.

What I like most about Musical U is the clear and well-written training modules. Also the personal support and advice the team have given.” We previously shared Carol’s musical journey in a Member Spotlight feature. She joined Musical U after taking up piano in her retirement. She told us:

“When I first found Musical U I thought it was way too advanced for me, since I was just starting out to learn to play piano. A discussion with Christopher S. convinced me that the site was designed exactly to be flexible for people like me and for the advanced musician.

Since being a Musical U member I’ve really gotten into rhythm, had success with melodic intervals, and chord progressions and can quite easily pick out a tune.

My favorite thing is that it has made me aware of just how much more there is to learning music than playing my instrument. I find it all fascinating!”

Learn more about Carol’s progress in her Member Spotlight! Brian M. picked his member name, @brian812, inspired by Van Halen. He’s a self-taught guitarist who wants to be able to improvise over any progression. He also wants to have a great ear, know music theory, and become a good songwriter.

“Since joining Musical U I do now recognize some chord progressions in popular music and I listen more closely to a song when I’m listening to the radio. I found I could use this information when I am working on a new song.

I have hope again that I will also be able to understand musical theory.

I really like the service at Musical U – the quick response when I do have a question or problem. I feel that Musical U has a genuine desire to help and improve people.”

Thank you to all the members featured here for sharing their experiences of Musical U – and to all our members for being part of our community and choosing Musical U to support them in their musical journey this year.

If you’re interested in becoming a member yourself, we would love to have you join us!

This week, to celebrate the 1-year anniversary we’re offering special reduced rates on memberships. You still get full access to everything normally included, but with a big discount. For full details click here:

All that’s left is to say a big “Hooray!” and “Well done!” to our members for all their accomplishments this year. The Musical U team is truly proud of what you’ve achieved and we’re looking forward to continuing to serve you in this next year and beyond!