If you haven’t read Part One of this article, here’s a quick summation: in ear training, as in most musical pursuits, some of the most productive moments don’t come from dedicated practice time or specific exercises. In fact, they come from those fleeting moments of inspiration that strike you powerfully when hearing a surprisingly great song, seeing a favorite band live, and myriad other unexpected and seemingly random musical occurrences.

It follows, then, that a great deal can be accomplished by creating personal methods for capitalizing on these moments, rather than letting them pass by (and eventually fade).

I also mentioned that the operative word in this approach is “personal” – hence why this advice should be taken as informal suggestions for developing methods that work with your creative process.

The tricks we’ll look at today, along with those from Part One, are ways I’ve found helpful in reframing ear training as a constant daily process. In order to make any of them fit snugly with the rest of your daily responsibilities and pursuits, it will probably have to be tweaked!

So let’s continue, with some ideas that might inspire you to approach ear training, composition, and learning music theory in less orthodox and more personal ways…

Musicians have an unfortunate tendency to compare theory with mathematical rules and equations. It’s easy to see why: in a theory class it’s likely that you’ll be graded on your ability to follow the rules (e.g. of proper part-writing), stick to guidelines (e.g. for clear notation), and obey other (arguably arcane) specificities.

The trouble is that unlike, say, the quadratic formula, we can look around after class… and find a nearly unlimited body of music that intentionally breaks any of these rules!

It’s more accurate, therefore, to compare the rules of theory (which, of course, define what we are attempting to train our ears for) to a proper dialect – like “Standard Written English”.

In English, there are all sorts of arguments for and against obeying rules (like avoiding split infinitives, and so on). Somehow I can’t help but think of corresponding musical issues (like the dreaded ‘parallel fifths’) when I remember my old English classes.

Thinking about musical styles as different dialects gives us many direct advantages.

First of all, I think you’ll find it’s a much less intimidating model than the more rigorous rules of math. More importantly though, it provides some context for the kinds of things you try to practice.

Say, for instance, that you were working on training your ear to recognize the differences between more complex chord types: minor elevens, major nines, etc. The “math-musician” is more likely to approach these chords in a reflexive way – which is to say that they’ll most likely focus on the specific notes in the chord that distinguish it from all other chords. The “linguist-musician” on the other hand might try to recognize a suspended fourth (“sus4”) chord by noting its context in popular dialects (i.e. styles) of music. They could listen to how a suspended fourth resolves to the tonic, or what chords tend normally to lead into a suspended fourth, and so on. In this way they’ll be more likely to:

Most importantly, you’ll be able to use “context clues” in analyzing all levels of music based on the similarities you find among songs in certain dialects/styles. Those characteristic traits of a style which make it distinctive. Building up your knowledge of these will make it much easier to determine on the spot what it is that makes a specific moment in a song so particularly awesome. This is much harder to do if you’re taking a very strict, literal approach to musical rules, like the “math-musician”!

And if all that weren’t reason enough – doesn’t it just make the whole process a little more inviting? Now the rules are only there to help you write better, not to punish you for doing it incorrectly!

Suggestion #4: Be (Very) Specific About Goals

A statement like “I want to improve my ear” can mean a lot of different things. 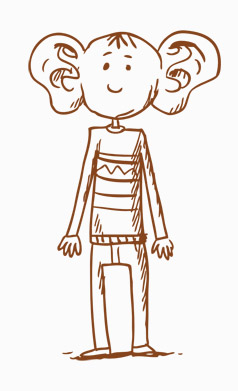 It could be a focus on recognising major intervals. Or on improving improvisational skills. To some, it might even mean a trip to a piercing parlor!

Try to take a constant inventory of what exactly your goals are. It’s fine to start with something vague. But try to be a bit more specific than just “I want to improve my aural skills”.

For instance, you might say “I want to learn how to play Spanish-style music.”

Then you can do all sorts of interval and scale exercises specifically in the Phrygian mode, and narrow it even further to specific intervals that cause you trouble or capture the style you have in mind.

It’s another piece of advice that might sound a bit obvious or banal, but I can attest from personal experience: the more specific you can be in articulating exactly what you want to improve about your ear, your musical habits, or even your technical ability – the faster you’ll start to see your efforts bleed into everyday playing.

And, more to the point of the article, you’ll find that examples of what you’ve been targeting (like Phrygian mode melodies) will start jumping out at you from the music you hear every day, whether from your own instrument, or the background radio playing in McDonald’s.

So those are my most universal suggestions for making your ear training more effective and using it to capitalise on inspiration.

I hope they’ve changed the way you think about the process, or at least showed you some ideas about how to personalize your approach in your own practice.

The bottom line is this: if you can figure out methods of training that appeal to your own learning habits, the time you spend practicing will yield exponentially more progress than if you just use standardized exercises, and you’ll find yourself more and more able to harness those creative flashes for your own music.

What tips or strategies have helped you to hear more in music and be more creative in composing? Has ear training improved your ability to analyse songs and pieces of music? Let us know in the comments below!