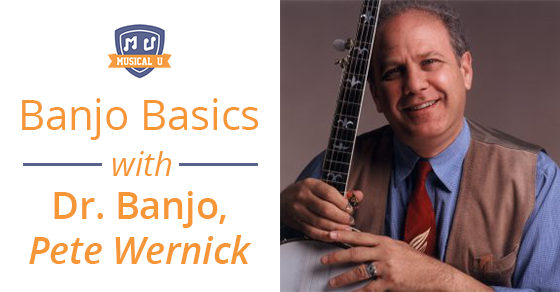 This week at Musical U, we were proud to be able to sit with one of the most renowned banjo players in the music business. Pete “Dr. Banjo” Wernick is a Grammy-nominee known throughout the world for his contribution to bluegrass music and for his hot-picking style.

To learn more about Pete, visit his personal website, where he offers audio and video files, as well as a store where you can purchase his albums and instructional tutorials. You can also check out the page for his bluegrass band, Hot Rize, on Facebook.

Musical U: Thank you for sitting down with us today, Pete.

Pete Wernick: Thank you for having me. I’m very happy to be here.

MU: Tell us, how did you get your start playing the banjo?

PW: Well, unlike many musicians, I never had any formal music training of any sort. Truth be told, I probably wouldn’t have gotten into playing music at all if I had to take lessons with a lot of scales, theory, and infrastructural stuff that a lot of teachers insist on starting with.

No, my playing started as a strictly recreational activity with friends when I was 14 back in New York City. Folk music was the big thing back then and we would get together – me and some friends from the neighborhood who would be playing guitars and banjos – and it was the social aspect of it all that motivated me to play and to keep playing with my friends.

MU: Why did you choose the banjo specifically, as opposed to other more “mainstream” instruments, like the guitar?

PW: My dad had a banjo in the house that he’d bought – a fairly cheap instrument – and a friend  showed me a few chords and licks and I got hooked on the thrill of making nice sounds on the banjo. An important step came on my 15th birthday, when another friend gave me a songbook with chords. The songs happened to be the songs we were already playing, so I was able to piece my way through the book, chording and singing, and pretty soon I was fitting in and making music with my friends.

MU: Did you have any major musical influences growing up?

PW: When I began teaching myself to play the banjo, Earl Scruggs – of Flatt & Scruggs and the Foggy Mountain Boys – was a huge inspiration. His style was dazzling but accessible enough to pull me in. There was no instructional material for it at the time, so people like me who wanted to learn it had to just listen to his records and try to imitate this fast flow of notes. It helped that the chord progressions were usually simple: 1-4-5.

After a lot of trial and error with the timing, I could do it well enough to play it in jam sessions. Years later, it was very satisfying to create books and videos which have helped a lot of people learn the mysteries of Scruggs-style banjo.

MU: Do you play any other instruments?

PW: I also learned how to play the guitar fairly early on, which broadened my learning, and that eventually led to songwriting.

The Gift of Music

MU: What is your favorite part about being a musician?

PW: If I had to narrow being a musician down to one thing, I would say that it is the joy of putting your hands on a physical object and having these beautiful sounds come out of it. Also, as a kid learning to play an instrument, I came to appreciate the fact that I was impressive to other people. It helped me stand out.

MU: How do you remain motivated during practice?

PW: For me, it helps if I have a situation coming up where I’ll be performing or playing with other people. That’s a motivator to practice. Overall, I think the most important part of any music making is just to have fun. Let’s remember what music is for in the first place. While setting goals is important, such as setting up a repertoire, sometimes it’s nice not to set goals at all.

But to keep improving, I recommend interspersing the “fun playing” and the “results playing.” I might have something that’s driving me nuts, and then I realize that I just need to unwind and reacquaint with why I play the banjo, and play some simple stuff I just like to hear. I think of that time as “the banjo is my friend” time.

For improvement, I create small loops of challenging material to master, first at slow speeds, then gradually speed up. That takes focus and the persistence it takes to win the battle.  So I alternate “banjo is my friend” time and “banjo is my enemy” time.

MU: What advice would you give other aspiring musicians?

PW: I would tell anyone just starting out to find ways to play with others. And when you’re playing with other people, listen at all moments and continually ask yourself, “How does this sound and what can I do to make it better?” Good music doesn’t need to be fancy or hard. It just needs to sound good!

To learn more about Pete’s experience, information about upcoming camps and jam classes, or the Wernick Method, visit his website. You can also check out his band’s Facebook page, Hot Rize.

Looking for a place to gain some confidence? join Musical U to get involved with a supportive community of musicians. See you on the other side!