About Your Voice Sounding Weird

by Musical U Team | Podcast, Singing 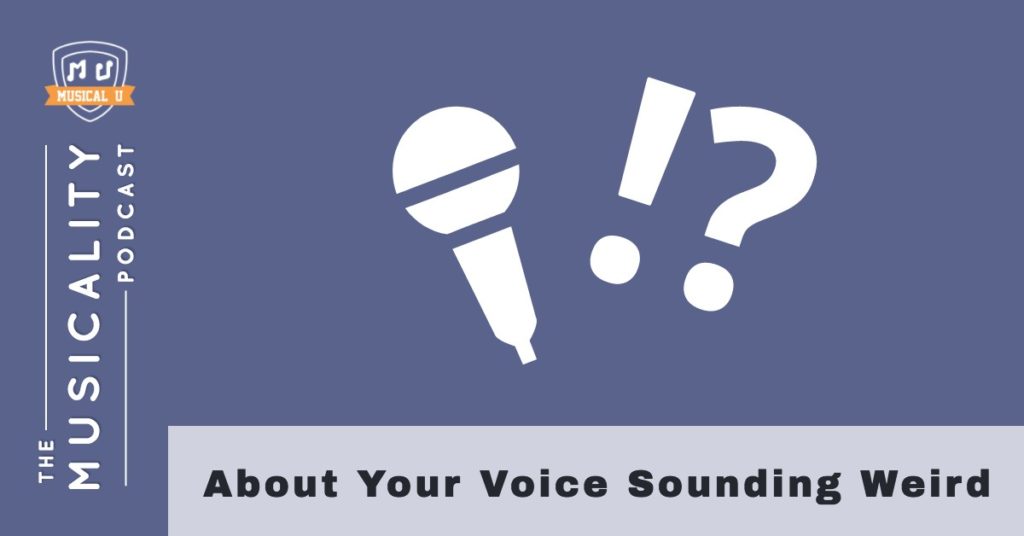 If you sing, it’s likely you’ve recorded and listened back to your voice. Chances are, you were surprised by what you heard, and thought “Is this really what I sound like?”. In this episode of the Musicality Podcast, we explain why recordings of yourself sound different from what you’re used to hearing, and how to get comfortable with listening to recordings of your own singing voice.

Does your voice sound weird?

A lot of people who’d like to sing don’t because they fear their voice will sound weird, or bad. A lot of musicians even, will avoid singing because they think they don’t have a good voice.

This is a natural worry, since our voice is such a personal part of who we are. They can be truly unique, and for the great singers of history that’s a good thing. Nina Simone, Frank Sinatra, Louis Armstrong – these voices are unmistakeable.

But that’s not the kind of “unusual” most of us are worried about.

In episode 11 of the Musicality Podcast we talked about how powerful it can be to record yourself and listen back, so that you can become your own teacher in a way. For instrumentalists and singers alike this is an amazing tool to have in your music practice toolkit.

The catch is that for singers, this can be a really hard exercise to do. Because a lot of us go into it worried that we’ll sound bad – and then when we listen back to the first recording we think “oh wow, do I really sound like that?!”

It’s like a confirmation of our deepest fears, that if we sang for other people they’d think we sound weird or bad.

But here’s the thing: the reason your voice sounds odd on a recording doesn’t necessarily mean it will sound anything but fabulous to other people.

There is a specific scientific reason our voice on a recording sounds odd to us, and knowing that can help you get past those first few awkward recordings – and the apparent weirdness of your voice will fade away. Trust me. This happens to every person, including me.

Before I say more though, I do need to acknowledge something which I’m sure a lot of you are thinking… Yes, it is possible that your voice actually does sound weird or bad! I’m not pretending that’s impossible. But the point is that the weirdness you hear on the recording is an auditory effect and one which fades – so you can’t possibly judge straight away. And if your voice is weird-sounding, then you know the best way to fix it? Recording yourself! That way you can pinpoint whether you have trouble with pitch and tuning, or your enunciation is off, or any one of 16 different factors that can affect whether you sound good when you sing. We have a module inside Musical U called “Good Voice” that walks you through these and how to address each one.

So I’m not pretending you’re definitely an incredible singer – at least not yet! But I do want to explain why you need to record yourself and listen back at least a few times before you make any judgements about your voice.

So, why does your voice sound weird on a recording?

The answer is physics. Specifically, the physics of how sound is transmitted through the air versus through your body.

The big part of why you may flinch the first time you hear your voice on a recording is simply that it’s unfamiliar. The sound you’ve been hearing as you talk each day, as you sing to yourself in the shower, and even as you were making the recording – it is actually different to the sound captured on the recording, and the sound that other people hear when you speak or sing.

This is because when we use our voice the sound travels out into the world around us through air conduction: the molecules of the air vibrate and carry the sound wave. That’s how other people or a microphone hear the sound. But as our vocal folds vibrate the sound also travels around our body – specifically through bones in our skull to our own ears. Bones conduct the sound very differently to the air, dampening different frequencies, and that means that our ears are picking up a mixture of two very different versions of our voice while other people and microphones are hearing just one of the two versions.

So you are very used to how your voice sounds when that sound comes both through air and through the bones in your skull. But when you hear it purely through air for the first time, you hear something quite different!

This is where the “hearfones” invention mentioned on our recent interview with Judy Rodman comes in. This is a clever device that helps send more of the air-conduction sound back around to your own ears, so that what you hear is much closer to what other people hear or what is captured on a recording. It’s an instant way to get the same effect as listening to yourself on a recording.

Whether you use hearfones or a recording though, the main thing to note once you understand that the sound is genuinely different (through no fault of your own!) is that the instinctive reaction you have to it is almost certainly coming from the unease of hearing your own voice sound so unfamiliar, rather than any real quality judgement. It’s unnerving to hear your own voice sounding different – a bit like if you looked in the mirror and then your reflection stuck its tongue out at you! It would be you, but also not you, and that’s uncomfortable.

So what can you do about it?

It literally just takes a bit of courage to brace yourself for the discomfort, do the exercise of recording yourself and listening back a few times, and you’ll find that unfamiliar feel quite quickly disappears.

Then, once you can listen to the recording of your voice and feel comfortable that yep, that’s your voice too, then you are in a position to start making judgements about what sounds good or bad, and using the exercise in the powerful way we discussed back on episode 11.

So that’s why your voice sounds weird the first few times you hear it on a recording. Take courage that it doesn’t sound nearly so weird to other people! And if you want to learn to evaluate and improve your voice, there are few better ways than recording yourself. So brace yourself for the slight discomfort and weirdness, try it several times spread over a few days, and make friends with how your voice really sounds. I’m confident you’ll discover that it’s not nearly as weird as it first appeared.