Home » Podcast » About Whole Steps and Half Steps

About Whole Steps and Half Steps

by Musical U Team | Podcast, Intervals 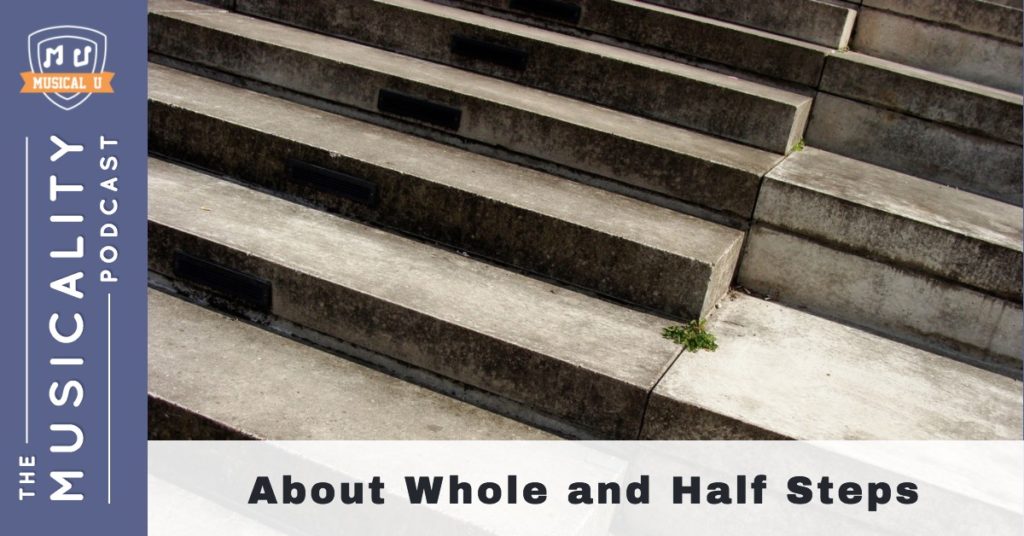 As a musician you might have heard of “whole” and “half” steps. Also known as “major and minor seconds” or “tones and semitones”. These are the building blocks of melodies, chords and all the pitches you hear in music and getting to know them in detail yourself opens up all kinds of exciting musicality potential.

Today we’re going to be talking about whole steps and half steps.

And the first thing we need to discuss is terminology. Because these two things are super important – but they go by several names…

I learned music in the UK, and there musicians learn about tones and semitones – these are very specifically-defined musical elements. They’re building blocks for pitch, like crotchets or quavers are for rhythm.

That’s all fine. But then you talk to a guitarist and they’ll tell you about the killer tone they’ve just achieved – and they’re definitely not talking about whole steps!

And if you mention tones and semitones to an American they probably won’t know what you mean – and they’ll often use the word “tone” to just mean note, or pitch – for example “a C major chord has three tones”.

So that gets confusing.

There’s also another pair of names used for whole and half steps: you might have heard them called major seconds and minor seconds.

This is coming from the world of music theory and intervals. These are perhaps the most precise names.

The trouble is they’re a bit of a mouthful – and that major/minor naming can be pretty confusing when you’re first learning music and figuring out what major and minor scales and chords are – and those major and minor seconds don’t necessarily fit in the way you’d expect.

So although I started out with tones and semitones I’ve come to quite like the “whole and half step” naming. It’s simple and practical.

Let’s talk a bit about why it’s practical – where those names come from.

I decided to talk about this topic after my interview with Jermaine Griggs from HearAndPlay.com. He shared a handy mnemonic, a sentence to help you remember the pattern of whole and half steps in a major scale: Why won’t he wear white when hot. The first letters of those words give you W W H W W W H – corresponding to whole whole half, whole whole whole half.

The naming “whole and half steps” comes from this idea of scales. I’m not going to go into teaching music theory from the very beginning here. If you do want really in-depth theory teaching I have two recommendations for you:

Those are both fantastic ways to go deep into music theory from the very beginning, and I’ll put links to those in the shownotes for this episode.

All I’m going to say on the theory front for now is that scales are generally built using whole steps. Each step of the scale from note to note is normally a whole step. Not all of them! That’s why we need this pattern and reminder sentence – and if you do build a scale just with whole steps it forms what’s called a whole tone scale and it sounds pretty odd to ears that are used to major and minor scales!

But if you were wondering why whole steps are called that even though our smallest building block is actually the half step – that’s why. They’re just more frequently used in music than the half steps.

So what about half steps?

As the name suggests, half steps are half the size of a whole step. It’s the smallest distance we use between notes – at least unless you dive into the wacky world of microtonal music! That’s maybe a topic for another day…

Most melodies in music move in what’s called “stepwise motion” a lot of the time – meaning each note is a half or a whole step away from the previous one. So these whole and half steps give you an insight into how melodies are put together.

Of course there are plenty of leaps in melodies too! But we can actually think of every other pitch distance in terms of how many half steps it is. If you’re familiar with intervals then a major third for example is four half-steps. An octave is twelve half-steps. This is really useful if you’re mathematically minded and want to understand how all the different pitches relate to one another and how different types of scales and chords are defined.

Even if you’re not particularly mathematical though, this concept is really handy. And that brings me back to Why Won’t He Wear White When Hot.

Many people learn scales just based on “sharps and flats”. They learn to play the C Major scale by knowing there are no sharps or flats, just play all the natural notes in sequence. Then they learn that G Major has one sharp, so do the same thing but from G to G and with an F♯. And so on.

The trouble with this is it doesn’t give you any understanding of what you’re doing. If someone asks you to play a scale you haven’t learned yet you literally have no way to do it! And it’s easy to forget a key signature or get in a muddle.

On this podcast we’re going to be talking a lot about musicality – and a large part of that is learning practical skills like recognising notes or rhythms by ear. But another huge part of it is simply understanding what you’re doing in music. And that’s why whole and half steps are useful.

It’s like peeking under the hood of your car or inside the mechanics of a watch, and actually knowing what the pieces are there for and how they work together.

This kind of understanding is pivotal for:

We’re going to be talking a lot more about music theory in future, and always in this very practical way. Some people like to study theory just because it’s interesting to them, and others do it just because they’re told to by their teacher or exam board. I hope that as a listener to this podcast you’ll start to see how studying music theory is one of the most empowering and liberating things you can do as a musician – if you do it in the right way!

So that’s a brief introduction to whole and half steps and why they’re useful. Hopefully you can see that breaking music down into its building blocks like this can really help you to have confidence that you understand what you’re doing, whether that’s with practicing scales, playing chords by ear, improvising melodies or anything else.

Why not start exploring whole steps and half steps today? Try figuring out a scale just using the Why Won’t He Wear White When Hot pattern, or analysing some music you’ve been playing to see where there are whole steps between notes, and where there are half steps. You might be surprised how enlightening it is to start spotting these fundamental building blocks of music!