by Musical U Team | Podcast, Transcription 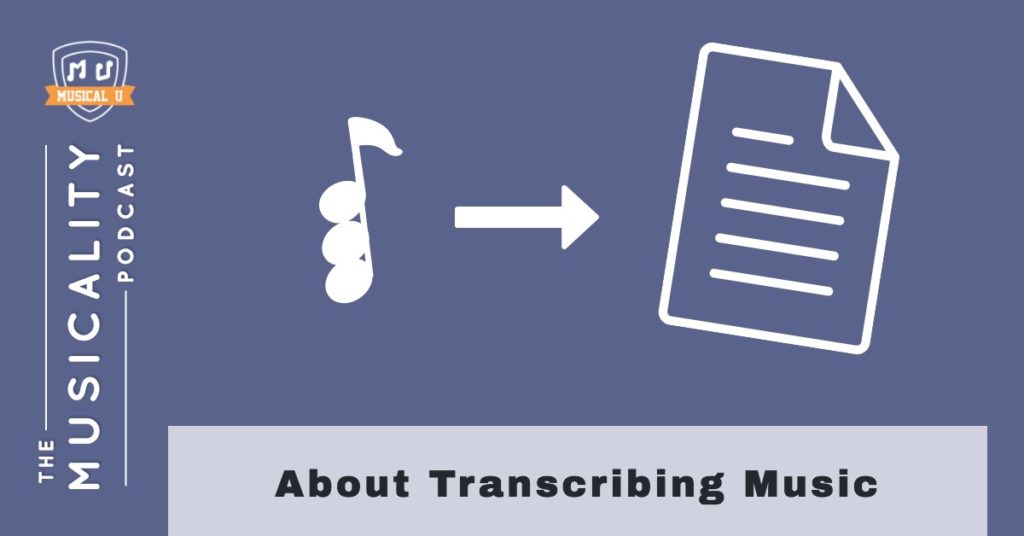 Transcribing music ensures that it can be replicated again and again by different musicians while still maintaining its melody, rhythm, and dynamics. It’s a beautiful thing, and picking up the skill of transcribing can do wonders for your musicianship! Here, we discuss how to tailor your transcription style to your instrument and your goals, and share some hidden benefits of learning to put music to paper!

In our recent episode with Steve Nixon of FreeJazzLessons.com he gave a few great tips for improving your sense of rhythm and one of them was to practice transcription: writing down the music you hear.

I wanted to unpack that a bit in this episode because it’s something that can seem overwhelming, intimidating – and, for a lot of musicians today, pointless.

But transcription, if you approach it right, can be a seriously powerful vehicle for improving your musicality.

We’re going to talk about what “transcribing music” means, why you might want to do it, and how to start learning to transcribe.

What is transcribing music?

The word “transcribing” sounds quite technical but in this context it just means “writing down what you hear”.

Where musicians often get tripped up is that we tend to assume that means writing it down in traditional score notation, and that can be intimidating to people who don’t read music or can read it but have never tried to write notation themselves.

So first of all let’s clarify: transcribing does *not* have to mean using traditional music notation. There are great benefits to that system of writing music and it’s something you might want to work towards as you learn to transcribe. But certainly at the outset it’s not 100% required.

For example, if you were trying to transcribe a clarinet melody you might begin by just writing down the note names. In a minute we’ll talk about why to transcribe, and you’ll see that even a simple way of writing it down like this, even though it’s missing elements such as rhythm, can still be very valuable.

Or if you play guitar you might prefer tab notation, and it’s perfectly valid to transcribe music in tab. Or perhaps you’re just trying to specify the chords to a song you’ve heard or one you’re writing – in which case writing a simple chord chart using chord symbols – for example a capital C for C major, a capital A followed by a small “m” for A Minor, and so on – that would be just fine.

Transcribing just means you hear music and you produce some written representation of that music. It might be simplified, it might be informal – or it might be a very in-depth, technical, note-perfect representation. These are all valid forms of transcription.

There’s one other subtlety to mention before we move on to why you might transcribe. A moment ago I said “transcribing means you hear music and you produce some written representation”. In fact you might “hear” music only in your head. For example a song writer might want to write down their ideas for melodies, a chord progression, rhythm, or other song elements, and that process of writing down what they audiate (meaning hear in their head) is a form of transcription too.

Okay, so if that’s what transcribing is, what’s the point of it?

The bottom line is that we transcribe music in order to capture it in a more permanent and versatile format.

If we hear music live or we imagine a new creation in our minds that’s very transient – it’s gone after we hear it. If we’re able to transcribe what we heard then we can capture that musical idea in a way that lets it live on.

In the case of hearing music in the real world you might be thinking “Yeah, but I could just record it instead”. And that’s fair enough. You could. And many song writers for example will start by just recording themselves singing a melody or in some way performing the idea they had.

But what about communicating that idea with other musicians so that they can play it immediately on their instrument? What about capturing not just what you played but how you played it – for example with an instrument like guitar where the same note pitch can be played in multiple ways, or where the recording would have so much going on it would be challenging for someone else to decipher what was happening? What about if you’re a songwriter who doesn’t sing very well and doesn’t have an instrument handy, or is imagining a chord progression that you know the chord names for but can’t easily perform to record it on the spot?

Transcription provides you with a clear way to capture musical ideas in a way that other musicians can understand, in as much or as little detail as you want.

Transcribing music requires you to learn to transcribe music.

So let’s ask the different question:

Why learn to transcribe music?

Apart from the practical benefits just discussed, the process of learning to transcribe is huge for your musicality.

– The first is being able to write music notation. As we’ve talked about that doesn’t necessarily have to be traditional score notation, though it could be.

– The second is having the ear skills needed to translate what you hear (or imagine) into those written symbols.

I often say that one reason that all musicians should have a basic ability to sing in tune is that being able to sing back something you just heard is a real test of whether you heard it clearly or not. And that goes doubly for transcription.

To reach a good level of ability in transcribing music requires you to train your ears. While you can do ear training exercises and pass quizzes for interval recognition or identifying chord progressions, and so on, taking a real piece of music and challenging yourself to write down what you’re hearing is the real proof of what your ears are able to do.

All of the core ear training we do at Musical U is in the interest of these kinds of practical tasks. And whether you want to pick up your instrument and play what you just heard or imagined, or you want to write it down on a piece of paper and produce your transcription – the ear skills required are exactly the same.

Want better ears for rhythm? Use transcribing rhythms as your benchmark.

Want to recognise chords by ear? Challenge yourself to write down the chord progressions you hear in songs.

Wish you had a better understanding of song structure and compositional form? If you can transcribe it, then you’ve got it.

Now I’m not saying just jump in and start trying to transcribe complex music – that’s a recipe for frustration! You want to take advantage of the core ear training exercises, just like you want to take the time to understand how notation works. But the practical task of transcription can be the perfect vehicle for guiding that training and giving you very clear proof of how you’re improving.

How to learn to transcribe music

So that’s my main advice on the “How to learn to transcribe” front.

You want to address the two component skills: being able to understand and write notation and having a well-trained ear to translate what you hear into that written form.

Both of these are areas which benefit from dedicated exercises focusing just on those core skills. For example at Musical U we have training modules for notes and melodies, for chords, for rhythms, and so on.

Learning to write down notation also has a big side-benefit that it helps you better understand how to read notation and doing this for transcription provides you with a much more integrated sense of how the written symbols correspond to the musical sounds you hear. For example if you’re used to transcribing complex eighth-note rhythmic patterns you aren’t going to have any difficulty sight-reading them when they come along in new music you’re learning.

As well as working on the two component skills you want to also practice the task as a whole. Start trying to transcribe and remember that you absolutely do not have to write down every note and rhythm of every instrument you hear! Maybe start with a singer-songwriter you like and try just writing down the notes of their vocal melody. Or listen to the guitar or piano and try writing down the chord progression in Roman numerals (or chord names after figuring out the key). See if you can write down the rhythms being used.

So to sum up: Transcription does not mean writing down every aspect of complex music in traditional score notation. It is a totally versatile activity, both in terms of what you’re trying to write down and how you choose to notate it.

Transcription can be a valuable part of your musicality training at any time and provides a wonderful vehicle for developing your understanding of written notation as well as your ear skills, both of which then benefit you in myriad ways throughout your musical life.