Home » Podcast » About the Little “Why”

About the Little “Why”

by Musical U Team | Podcast, Planning and Goals 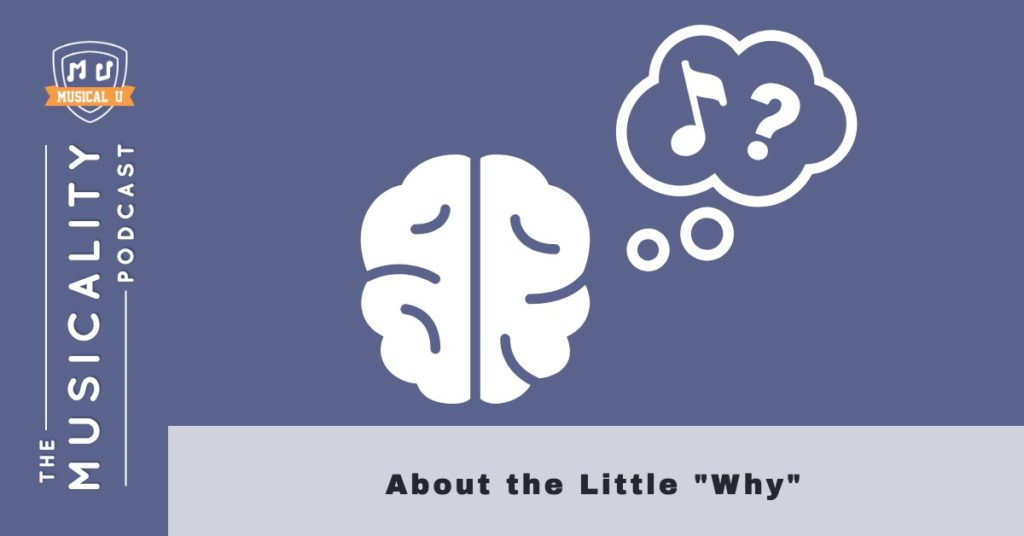 The Big “Why” drives our musical journey forwards – it’s our big-picture vision, our musical dream. But what about the Little “Why”? In this episode, we talk about the questions that you should frequently ask yourself about your musical trajectory to ensure you’re on the right track.

Hi, this is Christopher, the founder of Musical U, and today I’d like to talk about “the little why” – and how it can help you avoid frustration and wasted effort in your music learning.

We’ve talked here on the show before about staying motivated, and taking a long-term view. How you need to know where you’re trying to get to and why, to find success in your musical training and keep at it.

I’ll put a link in the shownotes to a few past episodes on this in case you missed them.

And inside Musical U we focus quite a lot with new members on getting them 100% clear on their “Big Picture Vision” and primary training goals, so that any modules they choose to take are going to effectively lead them towards those goals – we make sure that the training program is personalised and adapted to suit their actual motivations in joining Musical U in the first place.

You can think of all this as “The Big Why” – the “why” that drives and guides it all in your musical life.

But today I wanted to talk about the smaller scale of remembering your motivation. The “Little Whys”.

We recently had a Q&A call for our Foundations of a Musical Mind course, where students could come along live and get answers to their questions from me and Anne Mileski, our course instructor. And one of the students on the call, a chap by the name of Steve, was asking a question about form. There was an exercise in Module 4 of the course which referred to a song being in AABA form.

And Steve was pointing out that actually in this song the fourth line was a bit different from the first two, one of the rhythms was different, and he was asking “should this be called AABC instead of AABA?”

We had an interesting discussion on the call about that, and the quick factual answer to his question was that we might call this last line an “A variation” or mark it as “A prime”, but it’s also fine to just call it A.

And this led to the more interesting underlying point: which was that it depends why you’re figuring out the song form in the first place.

One thing I love about working with adult learners at Musical U, and especially in our Foundations course, is that adults have a bit of self awareness and a bit more determination to do things their own way. And while that can make it a bit like herding cats to try to provide training that works for all of them, it also leads to really fruitful and often quite deep conversation about how music is put together, and how all the various areas of music theory and different traditions of music education work – or, as is often the case, don’t work!

So what I said to Steve on the call because I thought it was an important bigger-picture point was: we need to remember to ask ourselves why we’re labelling the form. We aren’t doing it to get a question marked correct on a music theory exam. In the context of the Foundations course, we’re doing it so that we can then improvise or compose variations on that song, so that we’re building up our actual understanding of how the song’s put together. And once you remind yourself of that it’s easy to see the answer to the question. Call the fourth line “A”, call it “A variation”, call it “C” or even “Jeff”. As long as your labelling is clear and serves you in the way you’ll be using it, that’s the “correct” answer.

Steve had understood what he needed to about the form – and so exactly what label he put on it at that point really didn’t matter. He was equipped to do the thing, in this case improvising, that he actually cared about, and had motivated him to look at the form in the first place.

Now it is good to know the “right answers” and use the standard terminology, so I don’t mean to suggest that Steve was wrong in any way to wonder about how best to label the form. But I think we often get tripped up thinking that we must learn these things just because we “should” know them, and that we’re only doing music right if we’re ticking the officially-correct boxes and doing what we “should”. And that can lead to us actually missing the point of it all.

This is really an underlying principle throughout the Foundations of a Musical Mind course, that although we do teach terminology and ways of applying the core skills such as improvising, singing, composing, collaborating and more – it’s the internal frameworks of understanding, the mental models that matter most. Because once you have those in place, all the rest, all the applications on your instrument, all the learning of theory jargon, and so on – that all follows smoothly and easily.

So there are two points here I wanted to share with you. The first is this specific comment that often focusing on the inner frameworks, the mental models, your understanding of music can make it a lot easier or even unnecessary to learn particular skills or memorise rules, or study up on theory. If you’ve been listening to this podcast for a while then you won’t be surprised to hear me say that! It’s the “inner skills” of music that set you free.

And the second point is a slightly more general one, which is to make sure to be frequently asking yourself “Why do I want to learn this?”. You don’t want to be constantly second-guessing yourself and changing course in your learning, of course. But I’ve seen far too many musicians spend far too much time, and waste far too much energy going down rabbitholes or getting all worked up about resolving some intricate detail of music theory – when actually if they stopped to remind themselves of their goals and interests in music, and shake off the obligation that you should learn it just because it’s there, or just because the establishment says it’s important, then of course you must study it. They might realise they’ve actually already grasped what they really need to, and could spend their time and energy much more usefully elsewhere.

There’s value in systems which have stood the test of time and there’s value in having a teacher, coach or guide in your training. But our learning should never be blind and unthinking – and particularly as adult learners we must make sure to remind ourselves: we’re learning for a reason, we have a motivation in mind. And remembering that motivation often brings simplicity and clarity to our learning in a way that nothing else can.

So ask yourself that little “why?” regularly – as in “Why am I learning this?” – to make sure you’re never putting in effort “just because” – but instead your learning is all on-point and will deliver what you most want in your musical life.