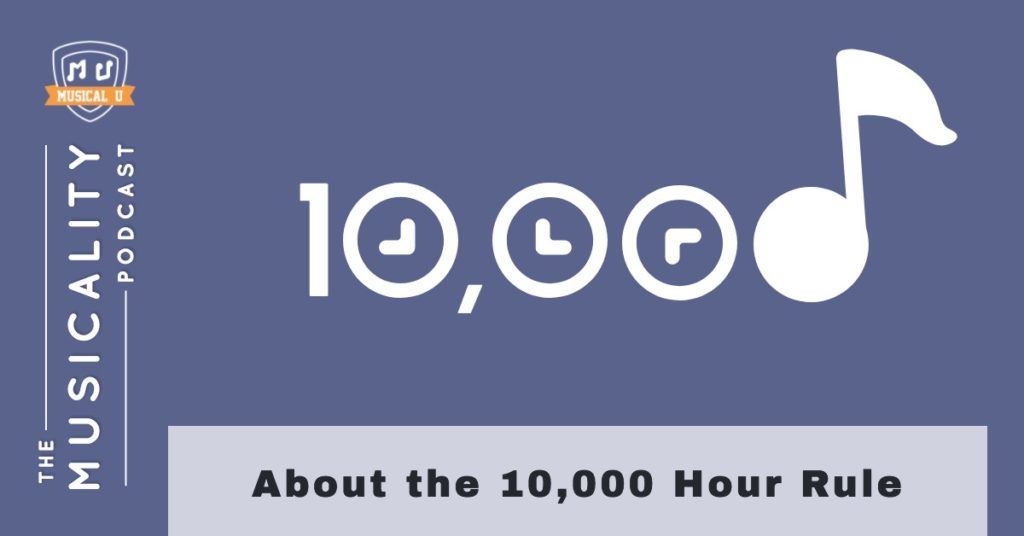 “It takes 10,000 hours of practice to become an expert,” states the 10,000 Hour Rule. Undoubtedly, working passionately and diligently towards your musical goals is a great formula for success, but what if musicians could get the results they want before hitting this numerical milestone? We discuss the truths and myths surrounding the 10,000 Hour Rule, and how to best allocate those hours to become a master musician.

In our recent interview with Ged Brockie of the Guitar and Music Institute he made reference to the “10,000 hour rule” when we were talking about the relative importance of talent and hard work for a musician. I wanted to pick up on that and talk about it on this episode because it’s a useful concept – but one that’s often misunderstood.

10,000 hours equates to practicing 6 hours per day, every day, for four or five years. If you’re a hobbyist spending just 30 minutes per day then you’re looking at about 60 years to hit the 10,000 hour mark!

This is something that’s referred to across various areas including music – people have run the numbers to show that the Beatles put in this effort for song writing, and that Mozart did to become so incredible while still a child.

But that simple statement can be seriously misleading. So let’s unpack it a bit. Where did this “rule” come from, what does it actually say, and what can we usefully learn from it for our own musical development?

The “10,000 Hour Rule” was coined by Malcolm Gladwell in his book Outliers. It’s a catchy and inspiring idea and one which has really entered mainstream culture.

The problem with this rule is that people mis-remember it, or hear it wrong from a friend in the first place.

You will hear people say “it takes 10,000 hours to become really good at something”.

But that’s not true, and it’s not what Gladwell claimed.

The clue to this confusion is right there in the name of the book: Outliers. Gladwell wasn’t talking about becoming good at something, or even excellent. He was talking about mastery. The chess Grand Masters. Olympic athletes. Internationally-touring concert pianists.

So don’t be discouraged if you can’t practice six hours a day for 5 years!

For most of the musicians who mention the 10,000 hour rule to me, their aspirations are to become “an excellent musician”. Someone who can jam easily and confidently with friends, perform in concerts, maybe even make a living playing music.

All of these can be achieved long before that 10,000 hour mark.

The first is that the way you practice matters. This is a detail that’s often glossed over but it’s vital. Clearly just putting in the hours isn’t enough. Spending 10,000 hours doing mindless drills or working on the same easy material clearly isn’t going to turn you into a superstar!

The original idea of the 10,000 hour rule actually comes from research by Anders Ericsson of Florida State University who published a paper analysing violin students at a conservatory and how they had practiced.

Notably Ericsson himself believes that “talent” doesn’t exist and everything boils down to the way you practice – more on that and his concept of “deliberate practice” in a future episode.

So however many hours you’re going to spend, make sure you’re practicing in an effective way. You might like to check out episode 10 with Gerald Klickstein for some great insights on how to spend your practice time, and I’ll put a couple of links in the shownotes to more on that.

The second useful thing we can learn from the 10,000 hour rule is that “talent” is mostly a myth. We’ve heard some interesting and different opinions on this from our guests on the show so far but one thing has been unanimous: however much natural ability you might have at the start, it’s the work you do to improve as a musician that matters most.

So don’t worry if you feel untalented in music. The true greats have put in the time. While the 10,000 hour number can seem intimidating, there’s also something deeply reassuring about knowing that becoming great really is just a matter of hard (and smart) work.

And as this show is dedicated to exploring, that goes for all the “inner skills” like playing by ear, improvising and creating your own music too.

The third useful thing to take away from the 10,000 hour rule is: this is a long journey! As we talked about with Ged on the last episode, there are no “quick fixes” in music if you truly want to become good.

In today’s world of overnight success stories and everybody wanting shortcuts, it’s good to be reminded that things which are worthwhile in life take time. In fact, that’s what the word “worthwhile” means: it’s worth your while to do it.

By knowing that everything in music is learnable and the journey is going to take time you can pursue your musicality with the mindset that will lead you step-by-step to success.

So those are three valuable lessons from this concept of the “10,000 hour rule”:

Before I wrap up though, I do want to address a couple of other important points. Like the idea that the 10,000 hour rule is about getting good rather than being about absolute mastery, there are other misconceptions and misunderstandings that are worth clearing up.

One is the dangerous idea that we’re talking about a fixed endpoint. That you’re going to have to put in 10,000 hours before something happens.

If you’re pursuing 10,000 hours of musical training and you’re practicing in the right way then every single one of those hours is going to make you a better musician.

It’s not an either/or on/off thing, where you’re not good until you hit 10,000 hours and then you’re an instant expert! It’s going to be a gradual process, and one that’s continually rewarding, as you get better and better.

So don’t be overwhelmed. Not only do you not necessarily need 10,000 hours to get to your personal goal in music, you’re going to be getting closer and closer with every hour you put in.

The other really dangerous and misleading thing about the rule is it gives the impression that there’s just a simple straight line to success. And even the way I just described it might give that impression, that it’s just hour after hour, getting better and better.

As we all know, musical training does not proceed in a straight line! Not only are there tons of areas you’re going to want to explore and improve in, you will inevitably encounter things that come easier and others that are hard to progress with, you’ll take diversions and wrong turns – and your path to success will be a very personal and winding one.

So when thinking about the 10,000 hour rule you also need to keep a realistic sense that this isn’t a simple and predetermined course you’re following. That’s why we have such a flexible training system at Musical U, because it’s vital that you be able to plan your training and adjust it along the way to match your background, your goals, and your experiences.

There are going to be twists and turns. Anticipate that, and get the support and guidance you need to help you correct course – and you’ll be able to persist and overcome and get to your goal.

So there’s just one more thing to mention regarding the 10,000 hour rule. And that is: how exactly should a musician spend those hours? We’ve already mentioned one aspect of the answer, the way you practice is important – but what you practice is, of course, too. Stay tuned! We’ll be tackling both of those in future episodes.