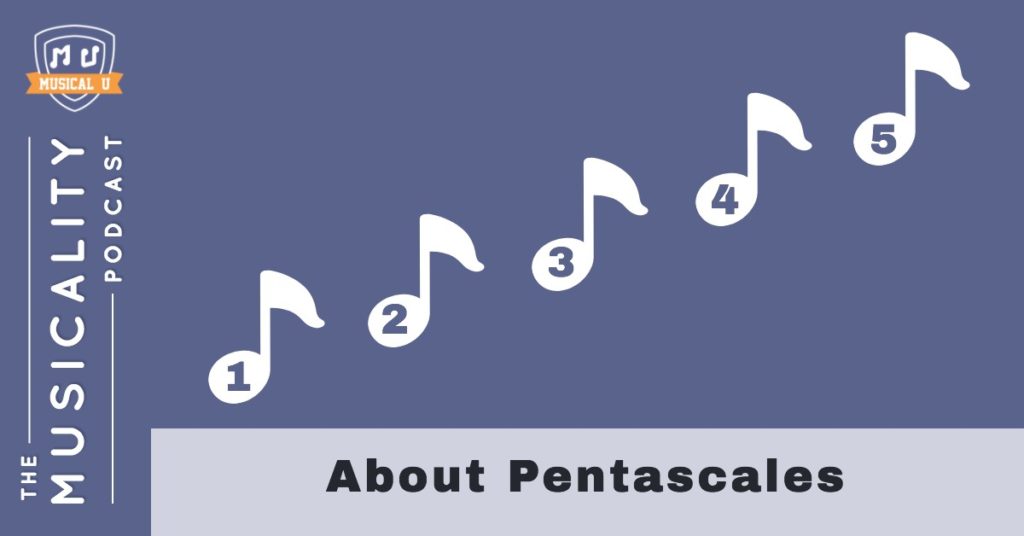 The pentascale (not to be confused with its cousin, the pentatonic scale) is an excellent starting point for piano improvisation. Learn why it’s an incredible tool for beginners, and how the constraint of using only five notes can inspire creativity in your playing.

We recently had Sara Campbell join us on the show and one thing she talked about was how pentascales had given her the opportunity to see the keyboard in a new way and start making a visual connection to how scales and chords are arranged on piano.

I wanted to pick up on that and talk a bit about pentascales and what makes them interesting – and also how they’re different from the pentatonic scale.

First things first: What is a “pentascale”?

You’re probably familiar with the idea of a scale in music. It’s a set of notes arranged in pitch order, ascending or descending. The most well-known kinds are major scales and minor scales – but there are many more beyond those. Scales are closely related to the key of a piece of music, the set of notes used for its melody and harmony. And they can provide us with an insight into how music is constructed and how the melody and harmony relate to each other.

A pentascale is a type of 5-note scale. The name gives it away, with “penta” meaning “five”. It’s actually just the first five notes of the regular major scale. So if we take C Major as an example, the major scale runs C, D, E, F, G, A, B, and C again.

So what’s interesting and useful about pentascales?

Pentascales came up in conversation with Sara because she is primarily a piano teacher, and they’re a type of scale that’s particularly popular with pianists.

The major reason, as Sara explained in that episode, is that humans have five fingers!

If you want to play a full major scale on piano with one hand you’ll need to move the whole hand partway through the scale. This is a tricky skill to get the hang of for beginner pianists!

A pentascale makes life easier, especially for kids, because you don’t need to move the hand to play the whole scale. All the notes are within reach.

Of course, playing scales as scales is not all that interesting or useful. But the same thing extends to everything we use scales for: specifically, melodies and chords.

When you first start out at the piano it’s easiest to learn pieces which don’t require you to move your hand around. With your wrist staying still, a pentascale lets you assign one note to each finger (and thumb) and have the maximum variety of notes available without moving the hand around the keyboard. So there’s a lot of beginner piano repertoire designed to be played without moving the hands, and it will often be built using the pentascale.

Pentascales are not just for piano though!

Funnily enough Sara is also very familiar with the other group of musicians that know pentascales well: singers. She’s a wonderful singer herself and also a vocal teacher, so she knows well where pentascales come into the picture for singers, and that’s warmups.

If you’ve ever heard a choir warming up you’ve probably heard something like this:

[ Demo with numbers and solfa ]

Pentascales are nice for vocal warmups because they let you explore and warm up your vocal range a bit more gradually than the full major scale.

So pentascales are particularly familiar and useful to pianists and singers – but they’re actually interesting for all musicians.

Pentascales can be interesting for improvising.

The way we teaching improvisation at Musical U is very ear-based – which gives you full creative flexibility but can be a little overwhelming at first. So we also use the idea of constraints and “playgrounds” that limit the notes you’re going to play and give you a bit more confidence that what you improvise will sound good.

Constraints can provide you with a “safe zone” for improvisation while actually sparking greater creativity too.

In fact we actually pare it back to just three notes, do re mi, for some exercises, to really bring out creativity in rhythm, dynamics and the other dimensions of music aside from pitch.

Pentascales are also interesting for their relationship to chords.

The notes 1 3 and 5 from the major scale give you a major triad chord, the most prevalent type of chord throughout music. And of course those notes are in the pentascale too – they’re just the top, middle and bottom notes!

You can also create a minor pentascale with the first five notes of the minor scale, and taking the first, third and fifth notes from that gives you a minor triad chord, the next most common chord type.

So pentascales encompass those chord notes and that means they give you a nice compact framework for thinking about melodies and chords and how they relate.

If we come back to the example of a beginner piano player, once they’ve settled their hand with a finger per note of the pentascale it’s pretty easy to explain that if they just play their thumb, index finger and pinky together they’re playing a major chord. Magic! Of course that same relationship holds true for other instruments and can provide an easy insight into how chords fit in with the scale and melody.

Now you might have been listening so far and wondering about another common type of scale with a similar name: the pentatonic.

Pentascales are not the same as pentatonic scales!

They are both five-note scales, hence the similar name, but there’s a small but important difference.

As we’ve talked about, pentascales take the first five notes of the major scale. Pentatonic scales actually take a different five notes, skipping the fourth and adding the sixth.

The pentatonic scale is amazing and we’ll definitely be devoting an episode to it in future. But for now just remember that a pentascale and a pentatonic scale are not the same thing, and everything we’ve talked about today was about pentascales specifically.

So I hope that gives you a clear sense of what a pentascale is, why it’s important for pianists and singers, and also how the implications for improvisation and the connection to chords make them quite interesting to all types of musician.

Oh, and if you are a piano player or vocalist, remember that Sara Campbell is kindly providing her pentascale reference sheet free to podcast listeners. Just head over to the shownotes page for this episode or her interview to find the link.