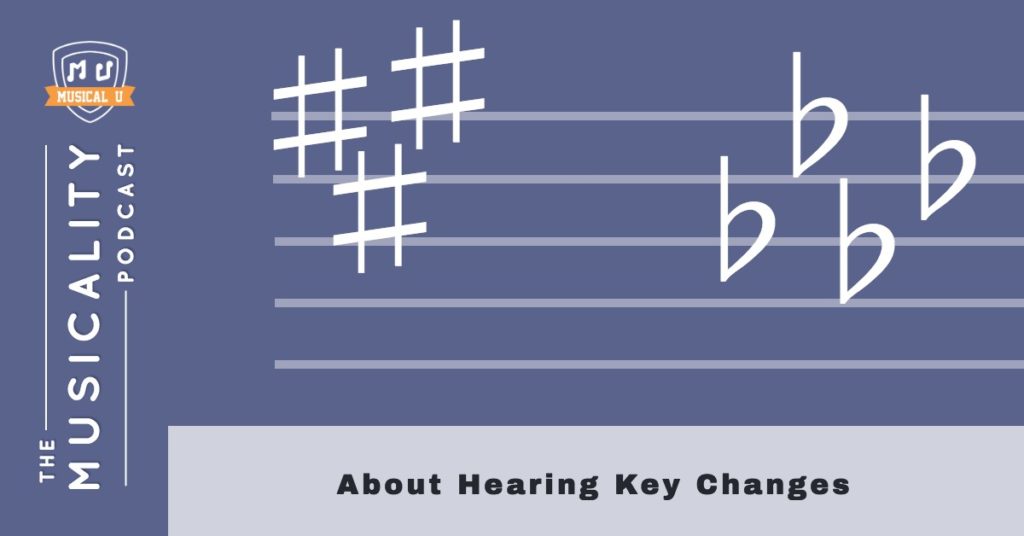 Christopher: Today I wanted to share with you a little nugget from a Musical U masterclass, because it’s something I know a lot of musicians struggle with, particularly those early on in their ear training – and that’s hearing when a key change occurs in a song.

We were joined by Katie Wardrobe of MidnightMusic.com.au, a fantastic website specialising in the ways that technology can help you learn music faster and easier. Katie presented on the topic of “Using Technology to Learn and Arrange Songs Quickly By Ear” and it was really a terrific walkthrough, packed with lots of handy tips and tech recommendations.

But what I wanted to share with you is actually just a little bit from the Q&A we did at the end, where someone asked about hearing key changes. I loved what Katie said and we had a bit of back and forth about what often trips musicians up with this, which I thought might be helpful for you.

So without further ado, please enjoy this little snippet from our Musical U masterclass with Katie Wardrobe!

Christopher: We had Sharath post a few comments, thank you, hopefully, Sharath, for taking part. And your question was, how to listen for a change in the key of a song? Katie, I don’t know if you have any tips on that one?

Katie: That’s a good question. Yeah. I think, often there’s a key change in a song and it’s often if there is one, there’ll be one three quarters of the way through, two thirds of the way through. It’s like a tension building thing from a songwriting technique point of view.

So listening for the key change, I suppose, I always feel it naturally. That’s from my point of view. I can feel that everything’s just shifted. But, one of the dead giveaways, if you’re not sure, would be that the melody suddenly has moved up a step, or a up a third maybe. So it’s moved up a bit higher. It’s often higher to build the tension. It’s not so much lower. If it’s changing to… yeah, that would be probably the main thing.

What I would do is, if you’re not sure, if you’re singing along and you can’t feel that internally, you could play along with the melody on your instrument, before the key change. Play along, perhaps, some of the melody, and then if you suddenly find that at some point in the song, when you’re playing along with the melody and it’s the same, but your notes are now not matching, and they’re sounding really strange, then you might want to try shifting your notes that you’re playing up a pitch and just see if that works. Or try fiddling around somewhere in that area.

So, things to look out for. Often the key change happens in an upward motion. There’s a song that I was listening to recently, and it was a pop song, and I was actually thinking key changes are not often used these days in pop music, as a compositional device to build tension, but there was something where there was… I wish I could remember the song, there was about four key changes in this song, it just goes up, and then up, and then up, and I’m thinking, “Wow, this is crazy.” If it comes to me, I’ll pop a note in. Yeah, that’s probably the approach that I would take and if you’re playing something like a guitar and you’re playing chords along with the song, same sort of thing, you might find that at some point it’s shifting. Suddenly your chords are not working and so you might need to search out the new key of chords along there.

Often, this sort of thing, where you learn about relative keys and that type of thing, you’ve probably got material on that in Musical U, I’m guessing, Christopher, that, understanding what normally… what composers do commonly is a really useful thing because… this is a lot of what I do in transcribing is, I know that commonly the one chord might move to the four chord or the five chord next, and so if you can’t hear it you can often guess, guess one of those options and go, “Yeah, I was right, it is the five chord at this point.”

And same with the key change thing. Often, if you know the short list of what composers do, you can often just do process of elimination. A lot of the time I really do do that. I think, what logically would this be, and this goes down to working out the chords of a song, generally. If I know that the song is in C major, there’s a short list of chords that are more commonly used in C major, particularly in pop and rock music. There’s gonna be the one chord, the five chord, the four chord, the six chord, and then occasionally some of those other ones, but pretty rare. If you’re thinking, I wonder if it’s the three chord at this point, you can try it, but, it’s more likely to be one of the others, so often I do that process of elimination.

Even on a granular level, process of elimination with acapella arrangements, in this bar I’ve got covered off already the root note of the chord so let’s pick a C major chord. I’ve got a C somewhere in one of the parts. I’ve got a G somewhere in one of the parts. And someone else is singing a C as well. What would this other person be singing? I can almost guarantee it’s gonna be the E, which is the other note of the chord, which is not covered yet. I will go, “I think it’s probably around the E,” and then I’ll, process of elimination, just work things out that way.

I hope that answers the question.

Christopher: Terrific, yeah, I think that was a great answer and you covered the thing that I instinctively wanted to say, which was that the theory and ear training can help you a lot, and I think the slight subtlety to it is when we get this question it’s often asked from people who are trying to just hear the key and they want to know when the key changes to the other key. We have to kind of talk them through the fact that the key is actually expressed through the notes and the chords being used. So, really, if you want to tune your ear into that, yes, you can do it in kind of a vague, fuzzy, “I feel like the key has changed” way. But actually, if you’re learning, for example, like you talked about earlier Katie, to recognize scale degrees, or you’re learning to recognize the one, four, and five chords, like you just mentioned, it becomes very obvious because your ear is happily going, okay, so it’s Do, So, So, La, La, So. Then suddenly, it’s not, it’s like all of the weird chromatic solfa, and you’re like, well that… something has changed.

Christopher: Something is not right. And likewise with the chords, as you said, it might be the three chord, but if you’re suddenly hearing that it’s the sharp four or something very off.

Christopher: Yeah. Once your ear has the right kind of framework for understanding what’s normal, it becomes much easier to see, okay, we’ve moved from this big group of musical elements to something a bit different and that’s your key change. We find that really helps people when they shift from thinking they just need to recognize a key change to understanding, okay, I’m just learning to recognize groups of notes changing to another group of notes.

Christopher: I hope you enjoyed that short excerpt from our Musical U masterclass with Katie Wardrobe.

You can learn more about Katie and explore the resources she provides for leveraging technology to help you learn music at midnightmusic.com.au.

As I said at the beginning, that was just a little tidbit from the Q&A section of Katie’s masterclass, in which she ran us through the four-step process she uses to easily learn and arrange songs by ear, using technology.

If you are a member of Musical U, fantastic, you’ll find the full masterclass waiting for you inside the members website. And if you’re not yet a member head to musicalitypodcast.com/join for a special podcast listeners offer on membership. Right now that offer will actually let you try Musical U in full for free for 7 days, so you could watch this masterclass plus a dozen others, as well as getting full access to our 50+ training modules and a lot more. Heads up, this offer is likely to change or may expire in future so if you’d like to see Katie’s full masterclass and get access to all those other goodies then do head on over to musicalitypodcast.com/join and take advantage of that offer. And I’ll see you in there!