Home » Podcast » About Having a Roadmap

About Having a Roadmap 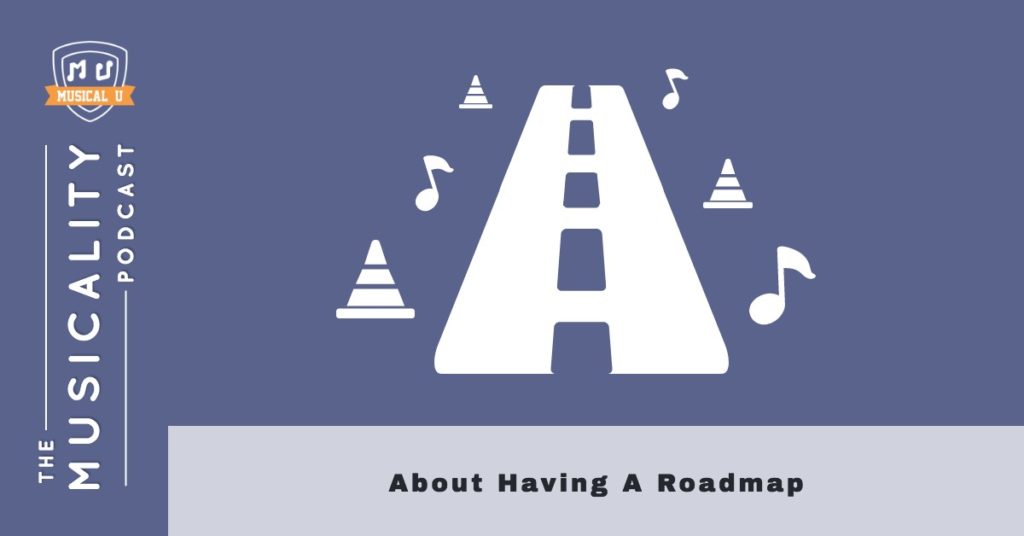 With the seemingly endless fountain of resources available for the self-taught musician, it can be hard to weed out exactly how to approach your learning journey. In this episode, we discuss the idea of the musical roadmap, how it can lend structure to your learning, and how we use them here at Musical U to give members a way to keep themselves moving forwards in a way that is tailored to their musical goals.

In our last episode with Dave Isaacs we touched on the challenge of modern music learning where you have access to unlimited resources and tutorials for learning – but somehow that rarely actually produces results for the self-taught musician.

This has come up a few times on the show and so I wanted to share with you the way we tackle this at Musical U, what we call “Roadmaps”.

First though, let’s talk about two things that *don’t* work.

The first is the scattershot approach. You are putting in effort and paying attention – but your music learning is all over the place. This week you find a new website and do lots of their exercises and tutorials, then they mention a music theory thing you’re not familiar with and you go on a jag learning all about that, and one of the theory tutorials mentions ear training so then you’re off downloading ear training apps and passing a week or two dabbling in a bunch of those.

Sound familiar? This is probably the most common way self-taught musicians approach things and unfortunately it’s basically a disaster. The one good thing is that it can keep that spark of enthusiasm alive, as you continually get that hit of dopamine from the novelty factor. But even that can flop, as you occasionally get really frustrated and disillusioned that despite all the time spent, you haven’t actually progressed in a noticeable way and you’re not really any closer to your musical goals.

Oh, speaking of goals – that’s a whole other topic but an equally vital one. For now, if you’re not 100% clear on your musical goals I’m just going to point you to an episode of the Learn Jazz Standards podcast where I was a guest and we talked all about effective goal-setting and planning for musicians. And it’s not jazz-specific at all, so do go check that out, we’ll have the link in the shownotes for this episode at MusicalityPodcast.com.

Okay, so the scattershot approach can entertain and occupy you but it doesn’t lead you steadily forwards towards your goals.

So a lot of people then switch to the other extreme. They find a guru or an institution and they say “Okay, I’m going to 100% dedicate myself to their course”. And they buy the course or they sign up for the program and they start moving through it, step by step.

Now what’s good here is that the course has been laid out clearly and it is aimed at a real goal. And typically that goes quite well to begin with.

But in the first few years of running my company and devoting myself to finding out what works in musicality training, I discovered something insidious here: it’s that online course completion rates are atrocious. Like 10% or less of students who sign up for a course will ever finish it.

Why is that? Well, there’s a bunch of factors and I don’t want to over-simplify what is a genuinely difficult problem to solve. But what we found was that the biggest problem with offering a straight-line “course” for musicality training is that there can be no “one size fits all” solution for this kind of skill learning.

In fact, every musician is different. We all have different backgrounds, instruments, genres, interests, existing ability levels, and so on. And we are all seeking slightly different goals, and we all learn in different ways and at different speeds.

This means that a “one size fits all” course ends up fitting nobody. So although the straight-line course is appealing it actually ends up being really frustrating for students as they inevitably get stuck at some stage and then don’t have any options for how to move forwards. This is made much worse by the fact that many online courses offer little or no personal support to help students out when they hit these struggles.

So those are the two most common approaches – the scattershot approach, and a straight-line course – and why they typically fail the majority of musicians who try them.

When we built Musical U I was determined to do better. We knew we had a ton of training material on all the important topics, some really powerful interactive tools, and a lot of experience helping musicians get great results with each of those. But it wasn’t immediately obvious how to pull it all together into something that would work better than letting members wander around scattershot, or trying to put them all on a straight-line course through it.

What we came up with was “Roadmaps”. The idea is that when you’re setting out to learn a skill like playing chords by ear or improvising, there is a ton that’s going to vary musician-by-musician. But there is also a lot that is going to be common, and it’s incredibly useful to have at least a suggested step-by-step explanation of how you can learn that skill.

So what we built – and this is an idea you can use yourself, even outside of Musical U membership – was a flexible training system, guided by Roadmaps. A Roadmap explains the sequence of training modules and exercises that can lead you from zero to having a fully-developed musical skill like playing by ear. But instead of forcing members to proceed through a Roadmap step-by-step, instead it’s there to guide them. The actual training plans they follow are 100% customisable, so that if a certain module is something they’ve learned before, or they know a bit of the Roadmap is irrelevant for them, or they get stuck midway through a phase of the Roadmap and need some way to keep moving forwards – their plan is totally adjustable to accommodate that.

So that alone went a really long way to solving this problem. Members get the clarity of a straight-line course but without the rigidity that causes them to fail. And they get the option of as much scattershot novelty and exploration as they might want or need, while still always keeping their eyes on the goal.

Have you got a Roadmap for what you’re currently learning in music? It’s different from a single resource, or app, or course. It’s the big picture guide to how to learn a skill. If not, we do offer free previews of all our Musical U Roadmaps that could be a great starting point for you – I’ll link to those in the shownotes.

Once we built the Roadmaps there was one more thing that was needed, and again this is a big point I’d love for you to take away even if you’re going to implement Roadmaps your own way rather than being a member of Musical U. And it’s something else that came up in our interview with Dave Isaacs, and in fact it’s come up a ton of times here on the podcast because many of the experts I’ve interviewed have wanted to point out the importance of it. And that’s having guidance and support.

There’s something wonderful about self-teaching, drawing on the wealth of resources available online and taking responsibility for your own learning journey. I am 100% in favour of that.

But a lot of people make the mistake of thinking that also has to mean going it alone.

Just because you are taking charge of your learning, that doesn’t mean you can’t get help!

What we added to the Roadmaps system and what was 100% essential for it to really work so effectively was: unlimited personal support and guidance.

So that if you don’t know where to start on the Roadmap, you can ask. If you’re not sure which bits you should adapt to suit you, you have an expert to advise you. And probably most importantly, when you hit a hurdle or a point of confusion, as inevitably happens at some point even with the best resources and the most dedicated student – you can ask for help and get advice that’s going to get you moving again.

The community and expert team at Musical U are our hidden amplifier. The training system and Roadmaps are fantastic – but in truth there are some other great courses and apps out there too. What really sets us apart is that we transform the effectiveness of it all by actually being there day-in, day-out to help members.

So whether it’s with Musical U or some other source of training and support, please make sure that you have a Roadmap for what it is you want to accomplish in music – and that you have personal support and guidance to help you really succeed on that Roadmap and reach the musical goals you’ve been dreaming of.