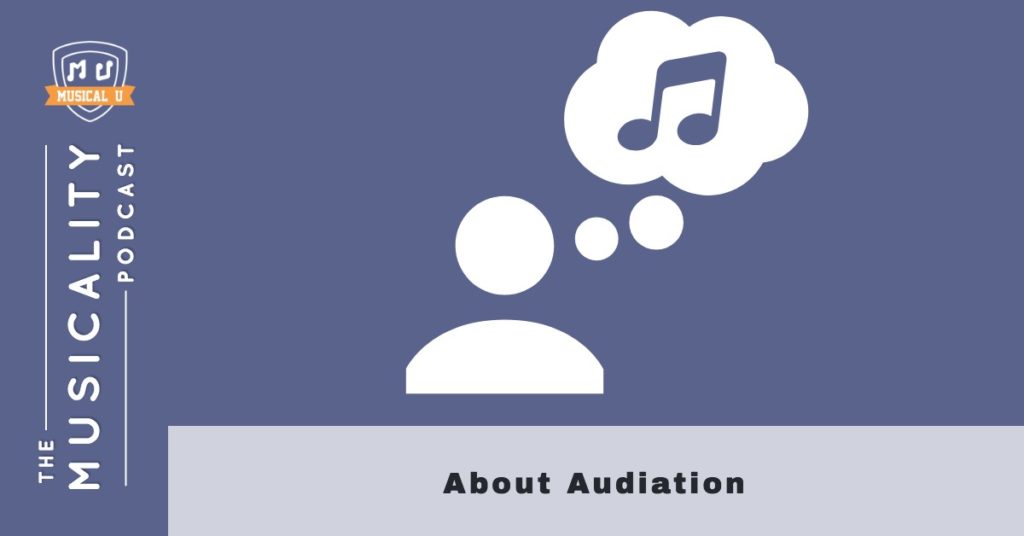 Did you know that it’s possible to practice your musical repertoire even when you don’t have your instrument in your hands?

Learn all about the skill of audiation, a.k.a. imagining music in your head, and how it can improve your musical memory, your understanding of the music itself, and even your performances.

Today I wanted to talk about something mentioned by Sharon Mark-Teggart of The Curious Piano Teachers in our recent episode, and which also came up when talking with Gerald Klickstein, author of The Musician’s Way, and that’s the importance of forming a vivid “mental model” of music *before* you play it.

This is something we teach a lot at Musical U, though it’s actually only recently that we’ve been turning it into a full-on training module.

The word we use for it is “audiation”, which simply means to imagine hearing music in your mind. That word was coined by Edwin Gordon, known for his “Music learning theory”, which was mentioned and recommended by past guest Donna Schwartz. I’m hoping we’ll have someone from the Gordon Institute of Music Learning on the show in future, but for now I wanted to just tackling this one part of his approach.

You might also hear it called “auralising”, and although those two words, audiation and auralising may sound technical, it truly is no more complicated than imagining music in your mind.

It’s the musical equivalent of visualisation, you’re just trying to vividly imagine the thing in your mind.

We all do it, every day, any time a song pops into your head on purpose or by accident. If I ask you now to take a moment and think of your favourite song, or the theme music from your favourite TV show – I’ll stop talking, see if you can hear that music in your head.

Were you able to hear it? You just audiated!

When you first start, it will probably be a bit fuzzy and you may not remember the music very well. But with practice you’ll be able to conjure up really realistic musical renditions in your mind’s ear.

So you see, you don’t need to learn to audiate. But it does take practice to get good at it.

Why would you want to do that?

Well, audiation is a seriously powerful tool to have in your toolkit as a musician and music learner.

It’s sometimes called the “Secret Music Practice Skill” because just like visualisation can help an athlete or performer prepare for the big event, audiation can be used to practice your musical repertoire, even when you’re not at your instrument. Simply imagining the music, in as much detail as possible, helps your brain to create and reinforce the connections that later will let you perform it well.

In fact there’s a great way to make this even more effective, called “Mental Play” – we’ll talk about that on a future episode.

So audiation can help you practice, even when not at your instrument. How does that work?

Well there are a few big benefits of audiation, each of which has a positive knock-on effect to how well you’ll play when you return to your instrument.

The first is that audiation is clearly very closely related to musical memory. The more vividly you can conjure up a rendition in your mind, the better you are remembering that music. When you gave it a try a moment ago you might have found that it started off easy but then you realised you couldn’t remember the words, or you weren’t quite sure about the notes or rhythm, or you found you had no idea what instruments were there apart from the prominent melody part. So practicing audiation helps you develop your musical memory and that benefits you throughout your musical life, beyond just the obvious use case of performing without needing written music.

The second reason audiation helps you practice is that it forces the brain to really understand what’s going on in the music. It’s easy when performing from written music to think you know what’s going on, but sometimes we gloss over a lot of details, or for example there’s the singer in a choir who does a great job of singing their own part – but ask them to audiate the music and they’ll find they have literally no idea what the other singers are singing. Practicing audiating a piece of music makes you really dig into what’s going on and whether you are truly aware and understand each aspect of the music.

And the third reason is the impact it has on the musicality of your performance. This was what Gerald Klickstein and Sharon Mark-Teggart were referring to, that to play music in an expressive way, in a musical way rather than a robotic way, you must have the music inside you first. And that means being able to imagine what you want your performance to sound like *before* you play it.

Apart from that new training module I mentioned, the main place audiation has featured inside Musical U up until now is in our improvisation modules. Because it’s the interaction between playing, listening and audiating that allows you to be truly free and creative in your improvisation. You need to be able to imagine your musical creation before trying to bring it out into the world – otherwise you’re just at the mercy of whatever your fingers happen to do based on the rote learning or robotic patterns you’ve taught them.

So to a large extent audiation is the core of musicality. Yes there are lots of external skills we want to learn and develop to let us express musical ideas in the world. But before that we need our ears and our brain to have understood the music we’ve heard or the music we want to hear, and that lies in your musical imagination and the ability to audiate.

As I said earlier, one of the wonderful things about audiation is that you don’t need to be taught it. Yes, there are pointers and resources that can help accelerate your learning, hence our new training module, but fundamentally it’s something you simply learn by doing. So challenge yourself this week to try audiating something every day. Pick a song and see how thoroughly you can conjure it up in your head and how much of it you can play back in your mind. I’d suggest checking our previous episode on Active Listening to help you with that, that’s a musical awareness skill that is very closely related to audiation. At first you’ll probably just have a fuzzy idea of the main melody and maybe not the whole song, but day by day you can add instruments, add sound quality, add detail and precision, until you have a really realistic playback in your mind’s ear. Take this skill to the music you’re working on too, and I promise you’ll see a big impact. Especially if you couple it with Mental Play – but that’s a topic for another day.