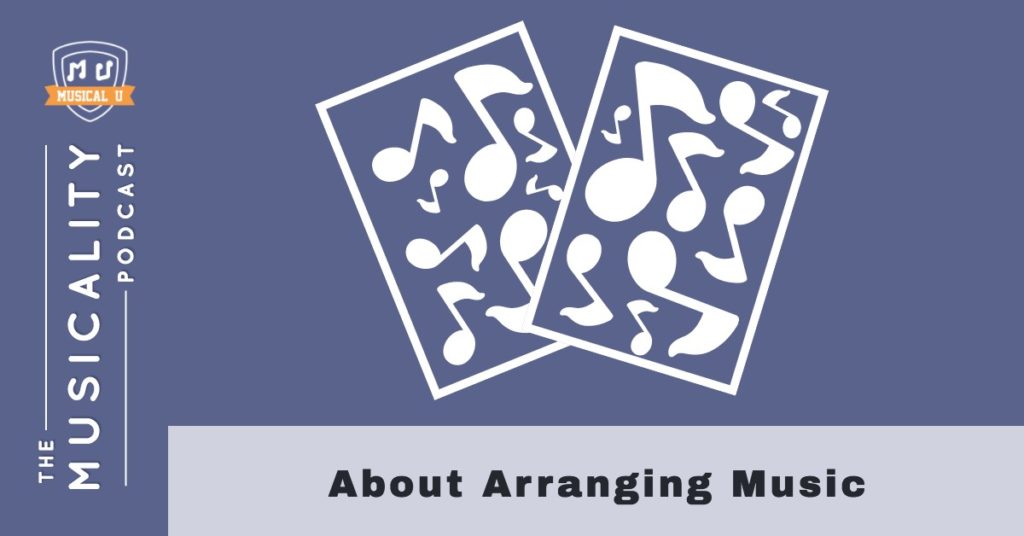 Arranging music is not nearly as complex as its name may lead you to believe – if you’ve ever plunked out the chords to your favourite song on the piano and sang along, you’ve already done it! In this episode of the Musicality Podcast, we discuss the elements involved in arranging music, and why you (yes, you!) should take a whack at it.

In our recent episode with Brad Davis we talked a bit about the terrific “bluegrass tribute” albums he’s put together, where he takes well-known music in various genres and arranges it into a really cool and different bluegrass-style performance.

I wanted to pick up on that idea of “arranging” music because I know that for a long time I put it in a specific box that existed in the world of classical composers and advanced orchestral stuff. But over time, as I’ve connected more with my musicality, I’ve realised how much broader arranging music can be, and how it’s actually something that any (and all) of us as musicians can be doing.

So what is arranging?

Well, as I just referred to, there is a traditional sense of the word in which a serious composer of music creates a full, and sometimes quite complex, score. An orchestral arrangement might have dozens of pages of music notation for each of dozens of instruments!

So it’s no wonder that a lot of people think of arranging music as a really advanced skill, requiring classical music training and deep understanding of music theory.

In my mind the composer “invented” the music, and then they or someone else would go to the trouble of producing a full arrangement to be played. And I still think that’s a pretty good way of thinking about it.

A lot of what we cover on this podcast is about distilling music down, often by ear, into its most important components. When we did our episodes on solfa, on lead sheets, on the “hook” – we were talking about listening to music and pulling out the notes and chords that really define that music. Not necessarily worrying about identifying each and every note being played, but honing in on the essence of the song or the piece. In a way that’s getting back to what the composer originally thought of, their core idea for the music.

Then all the detail – all the specifics of which instruments play what notes when – that’s the arrangement. So if our ear skills let us distil music down to just its essence, you can think of arranging music as the opposite, expanding it back out into a full version of that music that can be played and heard.

So obviously this is where it gets interesting – because the same core idea, the same melody and chords and rhythmic patterns can be expanded in any number of ways, to produce an endless variety of arrangements. And of course a complex orchestral score in traditional notation is only one of those possibilities!

The variety of arrangements

If I asked you to sing your favourite song right now, you’d probably hum or sing the melody. Not the chords, not the full band arrangement, you probably wouldn’t sing me every verse or chorus. But you would be singing me the song, and that means that you have just arranged the song, for a short solo voice demonstration.

If you listen to Elton John or Amanda Palmer perform a song accompanying themselves on piano – and you figure out the chords by ear then pick up your guitar and give it a try – you have just arranged that song for guitar.

If you take an 80s pop hit or a classical masterpiece and you perform it in a bluegrass style like Brad Davis – you have just created a bluegrass arrangement of that music.

If you sample a rock track and add extra loops and transform it into a dance version in Logic, your remix is essentially a dance arrangement of that track.

And if you create a viral YouTube video of yourself performing a Disney love song in four-part a cappella harmony, you have created your own arrangement there too.

So arranging can encompass:

Give yourself permission to try arranging

I wanted to talk about this topic today not because I had any in-depth teaching to share – but because I think there’s an important mindset shift here.

A big part of developing your musicality is about taking ownership of the music you play and create. Transforming from a musician who only ever plays the notes they are told to, the notes that somebody else has written – into a musician who feels free and confident and creative to make their own choices.

Sometimes that comes out through playing by ear and knowing that as long as you capture the essence of what you heard, that’s what matters.

Sometimes it comes out through improvisation or composing, bringing the music you imagine from scratch in your mind out into the world.

And sometimes, if we relax our notion of what “arranging” music means and who is allowed to do it, your musicality can come out through simply taking some music you love and asking yourself: how could I perform this differently? What if we took it in a different direction?

So I want to encourage you today to give yourself permission. Whether or not you’ve yet done the kind of ear training and musicality development we offer at Musical U, I assure you that you do have what it takes to begin arranging, in some way or another.

So this week why not take some music you enjoy playing and instead of playing it exactly as written, see if you can change something about it – and create your own unique arrangement.