A Change is Gonna Come

by Musical U Team | Podcast 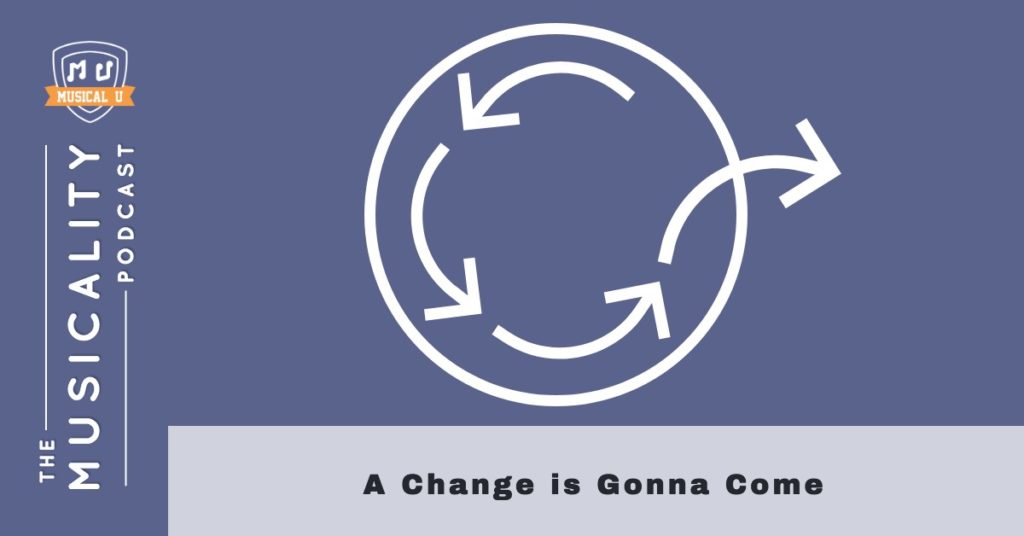 Happy new year! We’re excited to announce some changes that we’ll be making to the Musicality Podcast to continue bringing you the best content for helping you nurture your inner musicality. Here’s to your continued musical success in 2019!

Today we’re breaking from the normal episode format because I wanted to jump on to give you a heads up on a few changes coming up on the podcast.

We’ve been publishing the Musicality Podcast for well over a year now and we’ve been firmly consistent with our pattern of each week having an interview, followed by a teaching episode of some kind.

But as you may have noticed, recently we’ve begun to switch things up a bit. We’ve had some episodes with the Musical U team doing a roundtable discussion, recently we had a few teaching episodes in a row. And today you’re getting to hear our shiny new intro music for the first time, with members of the team introducing the show, big thanks to Andrew, Adam, Anastasia and Stewart for helping with that!

But we have some bigger changes coming up…

The first to mention is that I’ve been working on a special set of episodes for the next couple of weeks to help you to kick off the new year strong in your musical life. We’re about to relaunch our crazily popular course “Foundations of a Musical Mind”, and I’ve been inspired to want to share some of the most impactful concepts from that course here with you on the show. I always love new year’s as a moment to set yourself up with what you need for success in the year ahead so I’m hoping these episodes are going to help you do that.

The second major thing is that we’re going to be switching to a video format! Don’t worry, our audio show will continue as normal, but if you would like to watch our interviews and new episodes in future you’re going to have that option. Just head to musicalitypodcast.com to find the link to our YouTube channel and get instructions for subscribing to the video feed. I’m really excited for this, I’ve already recorded the first several interviews in video and it really adds a lot, I think, so I’d encourage you to go check that out and consider watching the show in video in future.

So between those things for the next month or so our schedule might be a bit varied – so I just wanted to give you a heads up so that you’re not confused or concerned if there isn’t always a Tuesday/Thursday release pattern.

Some things definitely aren’t changing – we’re going to continue bringing you terrific fresh content every week to nurture your inner musicality, and I’ll be continuing to seek out and talk with the world’s leading experts to bring their insights to your earbuds. Just in our next few interviews we have an award-winning avant-garde composer, a Billboard chart-topping songwriter, as well as a master of writing educational rap tracks for use in schools – oh, and we’ve also been planning ahead for a very special series of episodes dedicated to one of the greatest musical groups of all time.

So 2019 is going to be a good one, I’m psyched! And as always we would love to hear your input on the show, get in touch at musicalitypodcast.com/hello

As ever I’m grateful and honoured for Musical U to be a part of your musical journey – and here’s to your musical success in the year ahead!