by Musical U Team | Planning and Goals, General, Practice | 1 comment 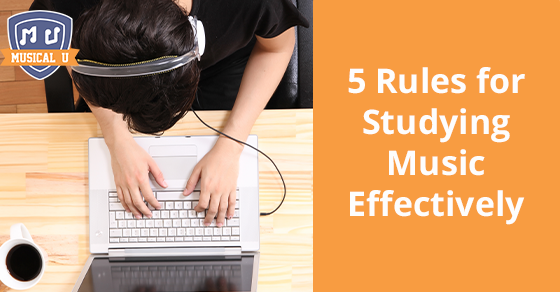 Studying music is exciting, but can also seem daunting. There’s so much to learn and master, and sometimes it may feel like you’re not making any progress. It can be easy to get frustrated and lose sight of your goal. Instead of getting discouraged, consider following a few rules to get the most out of your practicing. These will help you keep your goals in the front of your mind and see where you can make changes.

Don’t have a clear musical goal yet? Rules will definitely help you, but you have to know where you’re going before you can make true progress. You can read more about setting goals and creating a practice strategy here.

Now that you know what you want to work toward, here’s a list of 5 rules which the Musical U team has compiled to help you study music effectively:

If your practice sounds good, you’re probably not doing it right. A lot of people like to practice the songs they already know well, which doesn’t challenge you to get better. You should spend plenty of time practicing stuff you don’t know as well. Likewise, you shouldn’t be practicing new songs all the way through. It’s better to break these down into smaller sections – just a few measures at a time – and practice each part separately (for piano and some other instruments).

A lot of people mistake music, a creative art, to be something that you have to “feel” like doing.  They expect to feel “inspired,” and that’s when they want to practice. But you need to play even when you don’t feel inspired.

Part of getting better is working past the frustration and beating the things that may bring you down when you’re practicing. When you are feeling inspired, fuel those emotions to get the most out of your practice session. If you aren’t feeling motivated, challenge yourself to practice anyway. You’ll begin to feel more driven as you start meeting your goals.

3. Practice on a consistent basis, not in “binges” that are spread out.

Consistency is better than “binge” practice sessions. A lot of people don’t practice an hour a day, but instead miss a string of practice days and then try to cram in 6 or 7 hours into a single session. Then they may not practice again for another week and repeat the same cycle again.

While it may seem smart because you’re spending more time practicing at once, this practice model actually hurts you in the long run. It’s counterintuitive but true. Though you are spending an extended time working, you lose much of what you may have gained by waiting such a long time to practice again, and you may burn yourself out long before the end of the session. On the other hand, if you practice a little everyday, you’re in a fresher state of mind each time and you can build effectively on what you learned the day before. When it comes to practice, consistency wins every time.

4. Practice your goal, not a fake version of your goal.

In the same way, if you want to get better at improvising, you have to practice improvising every day. You can’t practice only songs where you read sheet music and then expect to be able to improvise. Put those two things together: if you want to be able to improvise in front of an audience, you’ll have to – you guessed it – improvise in front of an audience – a lot!

5. Get some external accountability.

If you are committed to playing in front of people more, offer to play for free one night a week at the local coffee shop or bar. People who achieve their goals create and find opportunities by giving themselves accountability outside of themselves. If someone is expecting them to perform, they’re more likely to practice with conviction and work toward their goals. It also means that skipping your performance would be letting someone else down, so you’re more likely to keep to your commitment.

Another way to get external accountability is to join a community. Find a musical community where musicians support each other by sharing their struggles, achievements, and ideas. Not sure where to find such a group? Consider joining Musical U!

So get out there and study effectively. Practice consistently, even when you don’t feel like it. Improve by playing music that challenges you. Put yourself in realistic musical situations. Get yourself some accountability. Follow these 5 simple rules and you’ll be surprised how much quicker you get results from your music studies. Try it!