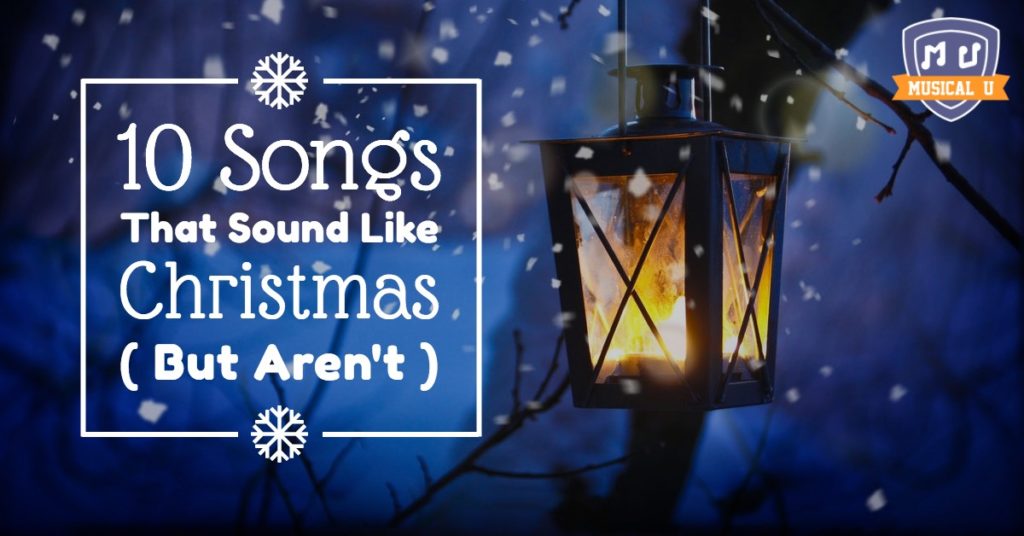 What’s in a Christmas tune?

A few months ago, my four year-old and I were sitting the car waiting to pick up my kindergartener from school, and I decided to pop in some Dean Martin. Upon hearing the first few bars of the tune, my little guy announced in his tiny-but-loud voice, “This is Christmas music, Mommy! But it’s not Christmas yet! It’s Halloween!”

It’s happened to you, hasn’t it? Sometimes a song comes on the radio, on your Pandora station, or on YouTube and even though it’s not a Christmas song per se, it triggers an auditory memory – all of a sudden, you went from listening to Radiohead to picturing yourself in front of the fire with a cup of hot cocoa (or whiskey).

What makes a holiday feel like a holiday differs from one person to another – you could say “fireplace”, but that doesn’t play if you grew up in Australia or Hawaii. You could say “church services”, but not everybody attends. The same goes for what sounds like a holiday.

This begs the question: what makes something sound like a Christmas song?

Everyone from country artists to Irish tenors and pop princesses puts their own spin on classics like “Hark the Herald Angels Sing” and “Blue Christmas”, so clearly, there’s as much variety to Christmas music as there are types of Christmas cookies. You could get into different theories on chords or lyrics, but it all boils down to what the listener tends to associate with Christmas.

Since more than half of the most performed Christmas songs of all-time were recorded from 1935 – 1965, it makes sense that most of us might hear big band sounds and doowop harmonies and note a bit of Christmas (layers of strings or brass always seem to do the trick). Add in any lyrics about winter, hope, peace, merriment, or the birth of a king and there you have it: a song, unbeknownst to itself, suited for a Christmas playlist.

And so we begin with the tune that started it all:

Maybe the Christmas feel is a result of the of the swingin’ horn introduction – reminiscent of so many intros on any Harry Connick Jr. Christmas record. The big band sound, orchestral strings, and cheeky piano fills feel like they came straight down from Santa Claus lane (and every time my youngest child hears this song he insists it’s a Christmas song, so that needs to count for something):

From the album Snow Angels by Over The Rhine

Karin Bergquist’s voice summons the spirit of Billie Holiday on this tune when she sings these lines: “When you come home and all the world’s asleep / I’ll close my eyes and breathe with sweet relief / This world has had you long enough for now / And when I get you home I’ll show you how / I wanna get snowed in with you”. Every line captures the true essence and message of Christmas classic “Let It Snow,” but with a more direct romantic twist:

From the album Christmas In My Heart by Connie Francis

This is a straight-up 1950s pop love song that others have covered over the years (notably Kylie Minogue), but there’s nothing like the original with the authentic girl group sound, rippin’ sax solo, and drama of string overlays. “It’s gonna snow outside / The weather will be cold / But I’m gonna be warm / This winter”. It’s a cute, feel-good song that would fit in perfectly with any tree-trimming setlist (or any Meghan Trainor album – you know you want to hear that girl cover this tune!):

From the album Warmer in the Winter by Lindsey Stirling

The intro sounds like it would be right at home in the Macy’s Thanksgiving Day parade while the lyrics sound like a perfect Target or Old Navy commercial selling fuzzy sleep socks and other stocking stuffers. The song is sweet and sentimental without being sappy, and how often do you get to hear a trombone and violin duet? Only at Christmas (Check out Trombone Shorty on this track!):

From the album All For You by Diana Krall

Krall’s rendition of the Nat King Cole Trio’s classic song lists all the things she doesn’t want and insisting instead on what she does want. Isn’t this what every mall Santa experiences every December, or what parents of picky eaters deal with at every meal? Now think about all of the delicious foods mentioned in the song and you have the makings of a holiday dinner:

From The Little Women Soundtrack

There are other versions of the hymn out there, but this simple, sweet version appeared in the film adaptation of Little Women, a movie ripe with wintery Christmas scenes. One verse of this hymn contains the following lines: “For each perfect Gift of Thine / To our race so freely given / Graces human and Divine / Flowers of earth, and buds of heaven / Christ, our God, to Thee we raise / This our sacrifice of praise”. The idea of God’s perfect gifts is perfectly appropriate for the Christmas season:

There’s something regal about Pachelbel’s Canon, and Christmas certainly celebrates the royal, with baby Jesus known as the king of kings! Add a fine brass quintet to the mix and you have the perfect recipe for a royal Christmas song:

From You’re The Inspiration: The Music of David Foster and Friends

This live track, featuring Andrea Bocelli and Katharine McPhee, is light classical pop at its best. It’s just easy to imagine the three wise men and the shepherds following the star with lyrics like these: “Lead us to a place / Guide us with your grace / To a place where we’ll be safe”:

From the album Life and Times by Jim Croce

The song begins with a guitar lick that sounds like “Deck The Halls” and then Croce launches into a sentimental ballad about “Snowy nights and Christmas lights / Icy window panes / Make me wish that we could be / Together again”. This song amplifies that shred of hope for reconciliation that we tend to hold on to, and since Christmas celebrates the hope of what could be and what is to come, this tune is perfectly Christmas-y:

From the album Quill by The Last Bison

The Last Bison refers to their sound as “mountain-top chamber music”. Whether you agree with this description or not, you’ll certainly hear that the guitar, mandolin, and bell sounds, along with the repetition of “Oh, call home” work together to evoke the feeling of Christmas. Plus, the song is about the snowy, peaceful country of Switzerland. Snow plus peace equals the stuff Christmas carols are made of:

Beyond the Christmas Carol

As you can see, what makes something sound like Christmas can range from a jazz standard to a brand new tune by an up-and-coming indie band. Whether you’re a budding songwriter or a professional musician, use this list to challenge yourself: what instrumentation can you add to a tune to make it festive? What lyrics can you develop to convey a subtle sense of holiday celebration?

Write your own Not-Christmas-But-It-Plays song this holiday season, and test it out by performing it for your loved ones to see if it gets them in a festive mood. Happy holidays!