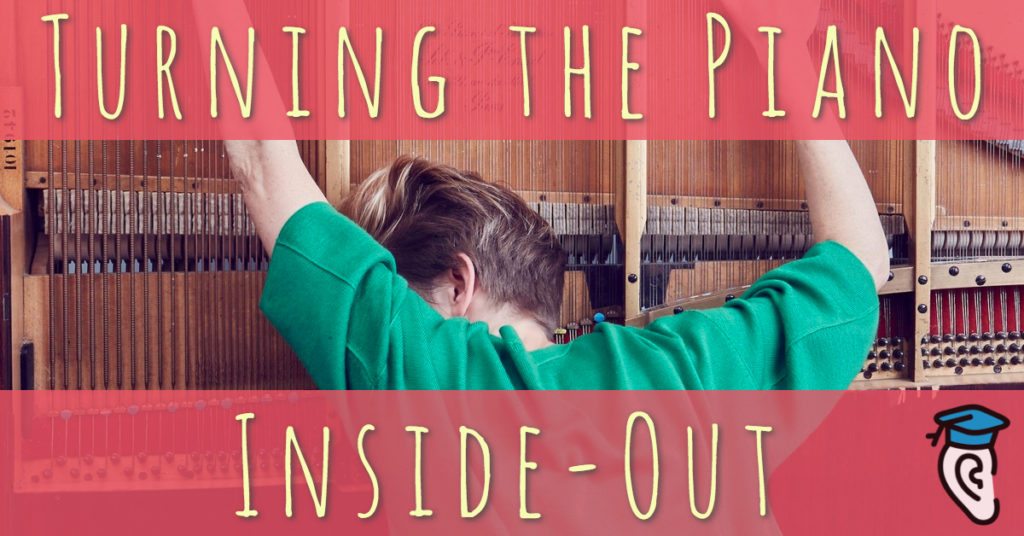 The inner workings of the typical piano hide behind yards of carefully lacquered furniture. As innovative concert pianist Sarah Nicolls collaborated with contemporary composers, she found herself exploring the sonic possibilities found inside the piano using various tools and body parts to produce otherworldly yet acoustic sounds.

She wondered what would happen if she climbed out of (into) the piano and turned the instrument inside out – literally. And so the Inside-Out Piano was born. 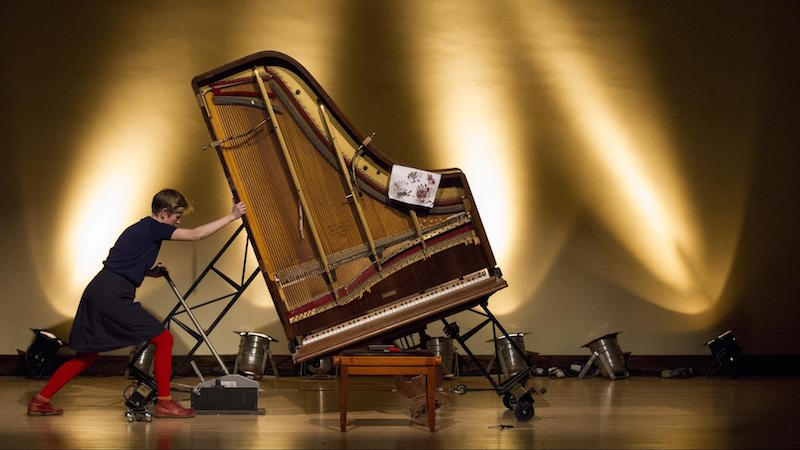 She found her once-traditional career expanding into music, text and theatre. Sarah has given many world premieres, is regularly broadcast on BBC Radio 3, and features on several CDs. She was a Senior Lecturer at Brunel University for 10 years before deciding to focus on her artistic career in 2016.

We were fascinated with Sarah and wanted to ask her about her music, her Inside-Out Piano, and her creative approach to her career.

Q: Greetings Sarah! Thank you so much for being with us here today at Easy Ear Training. So how did you come up with the idea of the “Inside-Out Piano” in the first place? What new skills did you have to learn in order to be able to play it? Who or what inspired you to create it?

I wanted to make playing inside the piano easier. It’s simply about ergonomics and what the audience see: make it more comfortable, make it more visible. There are so many great pianists doing inside piano stuff and the sounds are getting to be more well-known, so I just thought it was time someone asked, “Can’t we change the shape of the piano to make this better?”

The vertical strings are the main difference but once you’ve got over that, everything is easier. I have deliberately designed it to make every part of every string accessible.  This is really important. Pierre Malbos was the genius who built the piano (reconfiguring a 1900 Erard) and Yann Davidal was the man who built the amazing, swinging, metal frame.

Q: That’s an amazing and brave move! You’ve certainly blazed your own trail as an artist. Can you tell us a little bit about where that journey began?

My mum is a piano teacher, so from age zero I was always hearing lots of music in the house. I loved to sit under the piano during her lessons. By age three, I managed to get myself started playing with lessons from my mum. She “encouraged” (told!) me to practise lots, so that by age 14 I was able to go to a specialist Music school, Chetham’s, in Manchester.

At Chetham’s I was given a very structured day, including four hours of daily practise, and was amongst lots of talented peers in a very intensive environment.  After a music degree and some time accompanying, I came to contemporary music, working with composers around me.  This was where my career really started to take off.

Q: How would you describe yourself as a musician?

I’m coming from classical through experimental into something more tuneful, atmospheric, emotional. I’m a trained “concert pianist” interested in turning classical pianism and piano performance on its head. 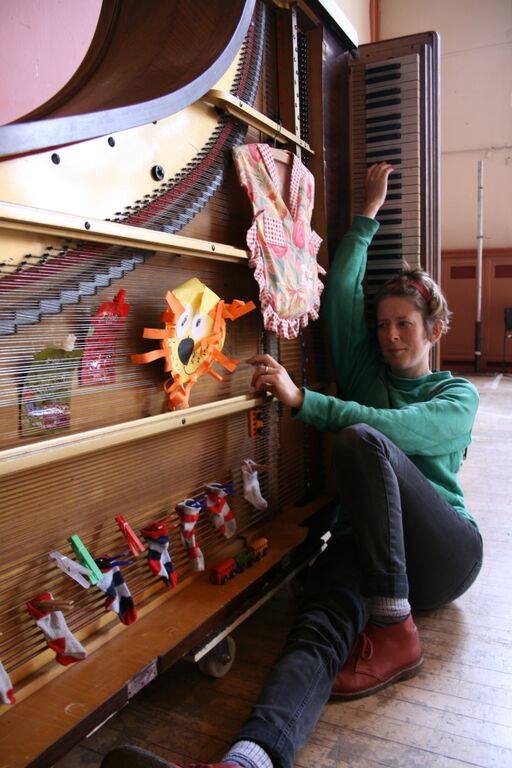 Q: What inspired you to make a career in classical “new music” and contemporary classical piano?

I love working with living composers – I liked getting a score from a friend and then working on it, having my own playing really stretched in the process. In turn, I am able to offer suggestions of how to make the music more presentable, easier to read or achieve.

I love doing new things (I get bored far too easily!), so this career style of constant discovery also really suits me. Ultimately it’s the sound, though – I loved finding music that might express my own contemporary life more fully or realistically than old classical music. And I also feel quite strongly that people like Brendel had already played Beethoven better than I’d ever hope to.

Q: Do you believe that classical “new music” and interactive music performances are the way of the future? Why or why not?

I’m not sure I could say “classical new music” is the future as often these concerts can actually feel very traditional. At the moment, I feel like I’ve moved beyond making anything “classical”. I hope that my music is infused with the thoroughness attributed to classical practice, but also with the textural richness of much electronica.

Looking at electronic music performance, the interaction is more meaningful to a contemporary audience. But because it’s so based on the available technology, it often becomes obsolete shortly after being created.

As we blur the boundaries between electric and acoustic, classical and contemporary, visual and musical, theatrical and social, artists and creators from different realms are rubbing shoulders more and more. I do think collaborations between artists of different backgrounds have an important and central place in the future of the arts.

Q: It’s almost like building a new musical culture. Speaking of collaborations, tell us more about your show “Moments of Weightlessness”.

Moments of Weightlessness is a theater show that I made to showcase my second “Inside-Out Piano” prototype, creating a metaphor about it as my first child. I start off by explaining why I made the piano (to get ‘inside’ – i.e. on the strings of – the instrument more easily).

But once something is created, that’s when you discover what it’s really about.

That’s how the experience of invention and discovery compares to the experience of becoming a parent. When I became a parent, it was more a thing that just seemed like “the right thing to do.”  The surprise of parenting was the sheer strength of the emotions (particularly as we had a frightening first 24 hours) and the surprise of the piano was that it could swing (a feature of its frame mechanism).

I surrounded myself with a team of experts to help me make the show – a dramaturg, a script editor, a movement director, sound and light teams – and used theatrical methods to devise the show.

The show moved a lot of people. I heard incredible stories from audience members, and it was amazing to hear laughter and tears during a performance. It immediately felt like a much more meaningful, or perhaps tangibly connected experience, than simply playing music.

Q: It sounds like you were able to develop an extraordinary connection with your audience. How did you attract people to such an “outside the box” show?

In each town the show toured to, I ran an audience development project called “In Our Hands”. I met mothers and filmed their hands whilst we talked about birth experiences and parenting more generally. It was incredible to connect with audiences on such a deep and personal level – each time I was reminded of the universality of the story I was telling.

Q: There’s such a high level of interactivity in your live shows. How do you transfer that into your recordings?

My album “We’re inside and outside” (2015) was a very long time coming – there are tracks on there that were born in 2008!  Being made on both of my piano prototypes gives it an unusual depth. It took lots of tuning, a span of several years of musical development. It took a lot of guts to put something out there but I felt needed to be done, to be able to move on musically.

I reach for simple melodies shrouded in strange sounds. 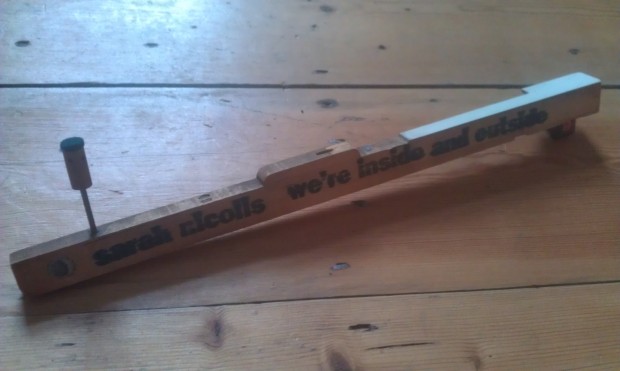 Compositionally, it seems I’m a big fan of a pedal note, I don’t seem to develop in any kind of classical style but instead get more and more into the textures that playing inside the piano offer.

Once it was done, I sold it as a USB-stick embedded in the piano keys of my first Inside-Out Piano. I stamped them with a custom rubber stamp made by a chap who lives alone in the fullest house I have ever seen.

So whoever owns one of these first 88 copies has a tactile experience with one of the actual instruments used to make this recording.

Q: That reminds me of the days when actually physically owning an album meant something. In our virtual times, I love how you are introducing new real, tactile instruments objects to relate to. While you are well known for the Inside-Out Piano, you’ve performed on other experimental instruments as well. How did you come up with the concept of “Ballet-Opera for Piano & Lights”?

That was at the London Design festival with beautiful lamps by Luca Nichetto. They had a Yamaha electric grand MIDI-wired to the lamps, so when I played they lit up individually, according to which keys were pressed. It was a fun few hours!

Q: Beautiful! How do these projects help you grow musically? Theatrically?

I hope that by following my nose, I will stay engaged and current and therefore authentic and true to my living concerns and thoughts. I hope in this way that I will make the most urgent and relevant art.

At the moment I’m making a new project with my audience’s stories: I want to explore what makes us the same and different and ultimately how to shape hope and community.

Q: Your whole artistic concept is so original. What kind of audience is attracted to your performances? 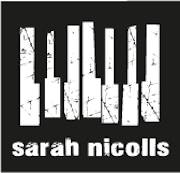 Literally anyone – especially since making the theater show.  The breadth of audience for that was much healthier than a normal classical new music gig. I really, really enjoyed that – lots of people saying they’d never seen the inside of a piano being played but who were completely compelled by the story and the music.

Q: You’ve made a career out of your own uniqueness. What advice would you have for our readers in blazing their own trails?

Stay true to what interests you at any given moment, be brave, go for stuff, lead if that suits you or find brilliant collaborators if you prefer working in a team.

Q: Great advice, Sarah. And very encouraging to anyone who thinks they are too “different” to make a difference. Thank you so much for sharing your story with us! We watch with eager anticipation to see what your next move is.

What an inspiration! Sarah Nicolls is living proof of what happens when we put as much creativity into our careers as we do into our music. Visit Sarah’s website for more on her beautiful music, poetic performances, and innovative projects.