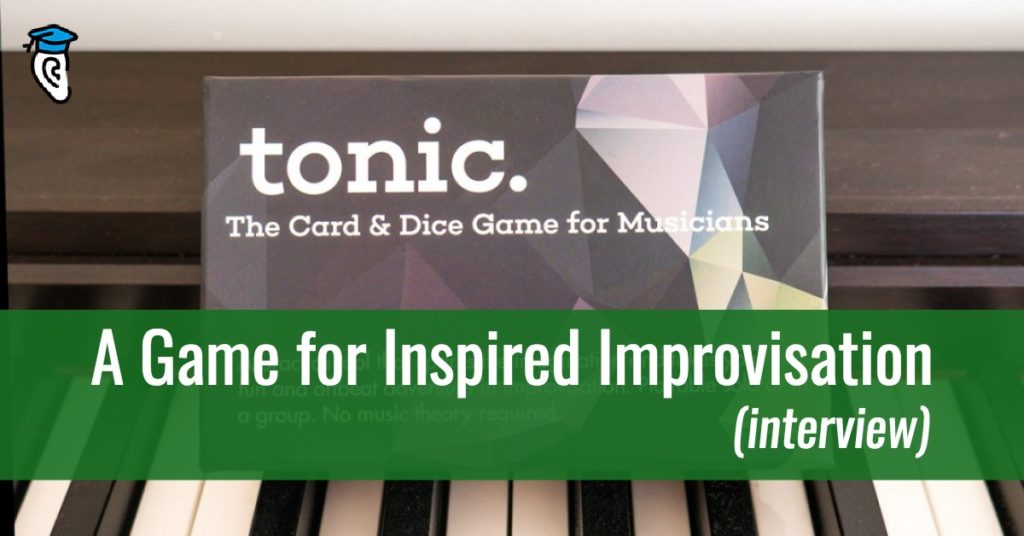 There are many reasons that musicians shy away from improvisation, but perhaps the biggest is that they simply don’t know how to get started. A new game of cards and dice called Tonic aims to solve that problem by giving any musician easy-to-use nuggets of improvisational inspiration.

CONTEST: We’ve been so impressed with Tonic that we’re running a giveaway contest. Win a free copy of the game by leaving a comment on our Facebook page here telling us how this game would be useful for you. Enter by midnight EST on Friday 11th March and we’ll randomly select a winner to receive a full copy of the game! 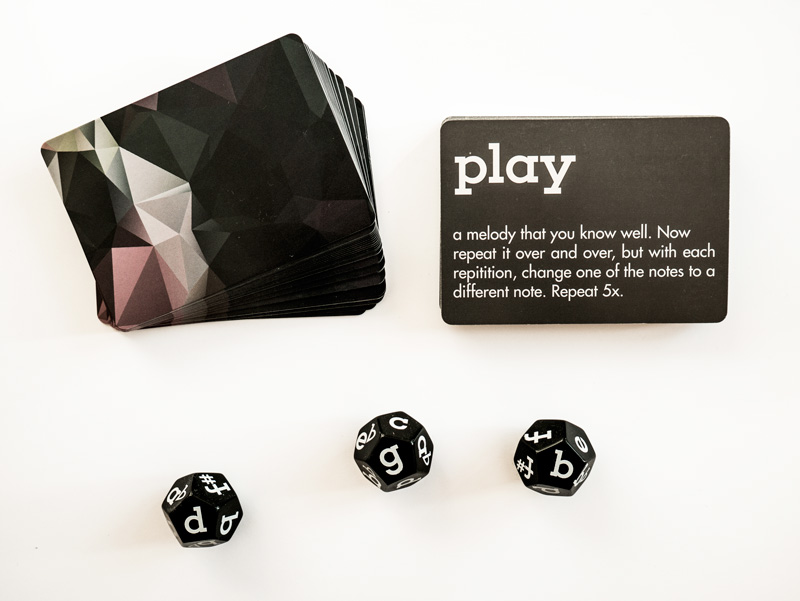 Tonic provides musicians with a source of these simple stepping stones and improvisational ideas, so that any time you pick up your instrument to practice improvising you don’t need to feel lost or overwhelmed. Instead you can treat improvising like a game to be enjoyed.

The game comes as a set of cards, each one of which has an improvisation prompt, for example:

limit
yourself to three notes. You can play them in any octave. Do this for as long as you can.

short
notes only. Keep everything choppy, using as many pitches as you like. Do this for as long as you can.

These prompts are essentially the game. As the accompanying instructions explain, “Tonic is a “game” only in the loosest sense of the word. There is no score, and there is no object. The point is to have fun, relax, and make music.” These creative prompts can certainly help you do that.

Accompanying the cards is a set of dice, twelve-sided and featuring the twelve chromatic note names. Using them is optional, but it’s a great way to get randomised notes to use. For example in both the cases above, these could provide the note pitches for you to use. This adds an extra challenge and helps you break out of your comfort zone (e.g. playing everything in C Major!) It could also prompt some interesting new ideas if you’re playing in a certain key and the dice encourage you to go beyond the usual notes for improvising in that key.

We invited the Tonic‘s creator, Scott Hughes, to tell us more about the game.

Q: Hi Scott, and thanks for joining us here at Easy Ear Training.

Tell us the story of where Tonic came from… What prompted you to create this innovative game? 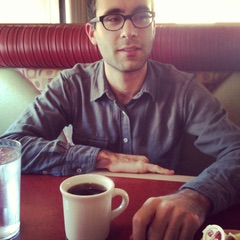 I wanted to create Tonic because I feel like it addresses a common misconception in music education, which is that improvisation is some kind of advanced skill that requires jazz training, music theory or taking big creative risks. But the truth is that improvising is nothing more than just playing around and experimenting by putting sounds together.

So it’s really something that a lot musicians are doing already, every time they sit down to play– rock, jazz, and even classical musicians. For classical players in particular, even if they’re just experimenting with different dynamics or phrasings, I’d argue that they’re still improvising in a sense. But the irony is that when you label it as “improvisation” it starts to feel like this serious thing and can lead to anxiety and creative blocks. I thought by encouraging this sort of open-ended creation in the form of a game, I could help people tap into that playful spirit.

”I thought by encouraging this sort of open-ended creation in the form of a game, I could help people tap into that playful spirit.”

As for specific sources of inspiration, the dice came from composers like Schoenberg who employed randomness in music. I also love composers who use untraditional notation like Iannis Xenakis, George Crumb and Anthony Braxton. These guys explored in an exciting way how different sounds can be expressed through graphically. Another big influence was Kenny Werner, whose work on free improvisation and meditation, particularly Effortless Mastery, was instructive to me and something which all creative musicians should check out.

Q: What’s your own background in learning to improvise or teaching others which led you to create the improvisation ideas used in Tonic?

I’ve been playing music ever since I could reach the piano keys, but it wasn’t until pretty late, probably when I was 16 or so, which is pretty late, that I realized all these amazing rock and jazz musicians I loved were actually improvising. Until that point I had no idea that it was even possible to play music by ear and learn a song just by listening to it, let alone to improvise complete solos and pieces of music.

It’s almost embarrassing to admit, but I didn’t comprehend that this was even possible to play music in this way. I guess I just assumed everything anyone ever played was meticulously worked out and written down on paper. Which is totally preposterous now that I think about it, but that’s what I thought, probably because my teachers were all traditional classical or symphonic band players and had exactly zero exposure to improvisation in their lives. This realization had a big impact on me, and I finally connected with the right teachers who could help me explore get started composing and improvising on my own.

Later I went on to play jazz in college, but I was frustrated by the way modern jazz musicians approached music. They tend to rely on old songs from the 1940s using fake books and are obsessed with transcribing bebop solos to study “the tradition.” To me, it never captured the totality of what improvisation can be.

When I look back at my own growth as a musician, I find it interesting that in my early development I was exposed to teachers who were completely disconnected from the world of improvised music. But then when I started playing jazz, there seemed to be sort of the opposite problem: the focus was entirely on improvisation, but with a really narrow scope.

Most of us follow a similar path. Either never learn to improvise at all, or we’re pigeonholed into a very specific form of improvisation and rarely branch out. I want to create games and tools to help people find some middle ground.

Q: Is Tonic suitable for beginner musicians, or musicians who are totally new to improvisation? Do you need to know much music theory?

Tonic is really best for the musician who is not a complete beginner, but who is new to improvised music.

Tonic does not require any theory to experiment with, in the sense that there is no reference to jazz harmony or classical-style roman numeral notation. You don’t need to know what a subdominant or a Lydian mode is!

That being said, it’s not for the complete beginner. You need to have some familiarity with basic music concepts like dynamics and phrasing, and you need to know what is meant by terms like “pitch”, “octave”, “interval” and “scale”. There is a glossary included with the instructions in case clarification is needed, but it really helps to have exposure to these terms beforehand.

Q: You mention on the Tonic website that the game can help musicians to train their ears. How does that work?

There’s lots of material out there which help players train their ears by running through certain drills, trying to identify intervals or scale types, or singing different harmonies

But ear training isn’t necessarily an active process. Tonic helps with ear training by acclimating to certain sounds. As an example, several of the cards instruct the player to pick two random pitches within an octave and improvise or compose a piece with them. So if you pick, for example, C, and B♭, then you’re dealing with an interval of a Major 2nd or a Minor 7th.

So in the process of tinkering with the notes while improvising a short piece of music, the player is getting those sounds in his or her head and understanding the harmonic possibilities—whether they know it or not! They will be better positioned to identify and use them in the future.

Q: Is Tonic something you think musicians will continue to use long-term, or are these ideas and skills that they will internalise over time?

Tonic is a tool, and like any tool it has a certain range of uses. The point of Tonic isn’t to produce complete pieces of music, it’s a way for each player to expand his or her palette creatively.

I would be satisfied if each musician who picks up Tonic walks away with just one new insight they can introduce into their art and build upon in their own way. “Oh wow, I never thought about how these 3 notes imply X harmony.” or “I’ve never thought about improvising a piece using just one note before.”

Q: What feedback have you had so far about Tonic? Is anybody using the game in ways you didn’t anticipate?

Absolutely. Because of my background, I had imagined Tonic to be something that appealed mostly to jazz musicians and people interested in wacky free improvisation or noisy electronic music. But when I launched it I was surprised by how most of the support came from amateur rock musicians and classical players who thanked me for presenting the case that improvisation need not be stressful or intimidating. It’s been really nice to see the response. 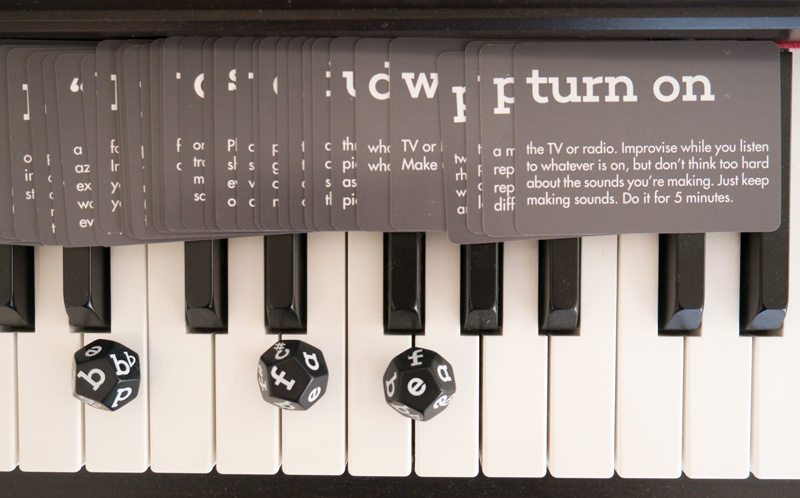 Q: What comes after Tonic – for you and for the student? Can they graduate to something further? Do you have a next game or music education project in mind for yourself?

It’s hard to answer because there is such a wide variety of musicians who are using Tonic. Each one has different goals and is in a different place in terms of experience.

Tonic isn’t meant to be any sort of comprehensive instructional program, but it’s rather a toy that can hopefully shake up some new creative ideas and get people inspired to push a little outside of their comfort zones.

For myself, I plan to keep developing musical games, refining and improving Tonic, and find new ways and products I can share to help inspire people to make better art.

Wonderful! Thanks again Scott, for joining us to share a bit more about this wonderful new music game.

You can get Tonic from its website at tonicmusic.co, including the option to download an electronic version of the card set. We highly recommend this as a practical tool for any musician who wants to improvise but hasn’t been sure how to do it. If you’re interested just visit tonicmusic.co and don’t forget to enter our giveaway contest right here!