Home » Instruments » Guitar » The Making of a Flamenco Guitarist, with Juanito Pascual

The Making of a Flamenco Guitarist, with Juanito Pascual 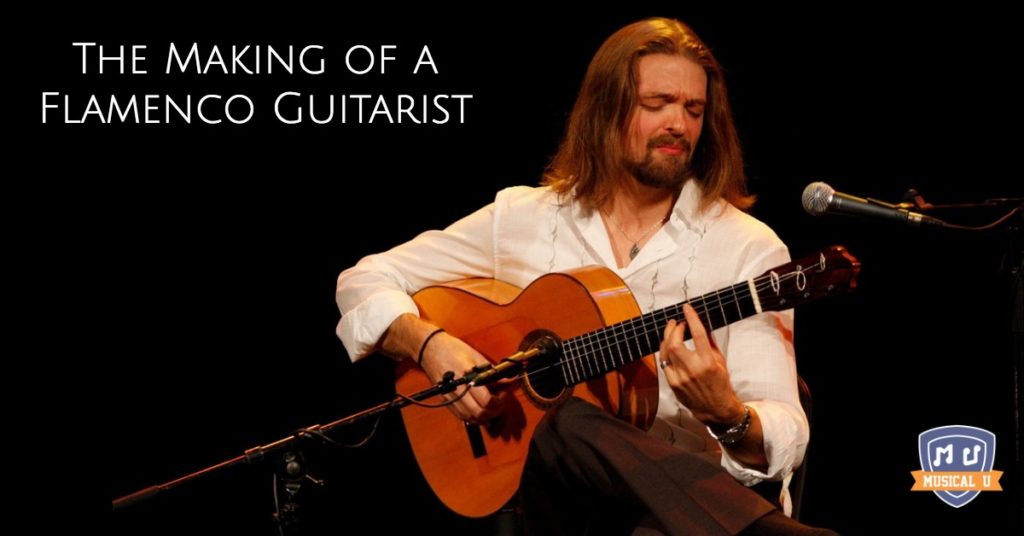 From middle-class Minneapolis to international flamenco acclaim, the guitarist, composer, teacher and bandleader now known as Juanito Pascual continues to draw on the jazz and popular music of his youth and fuse it seamlessly with the ancient flamenco tradition. Energized by the desire to share the beauty and soul-stirring power of flamenco, with its ancient roots, yet vibrant and evolving tradition, Juanito’s performances, recordings, and workshops reverberate with infectious charisma.

We caught up with Juanito after he returned from a trip to Panama, where he collaborates with Earth Train, a Panamanian rainforest project which uses music and art as means to inspire and educate a new generation about environmental stewardship, and spoke about his journey into the art of flamenco:

Q: Holaaaa Juanito! It’s great to have you here with us on Musical U. Please tell us, what is your musical background? How did you come to flamenco?

Well, I started asking for a guitar at age three. After a few piano lessons and playing cornet in the school band in fourth and fifth grade, I finally received my first guitar and formal lessons at age 12.

The day I got my first guitar, I had this strong feeling I’d always play guitar, and could not wait until I’d been playing for 20 years… at 12 years old that sounded amazing to me. Even though I had enjoyed and still enjoy playing around with all instruments, I was captivated by the guitar in a way that I did not experience with the piano or cornet.

My first guitar teacher was a good fit: he was very versatile, and from the get-go, we looked at classical, blues, rock, then country, funk, jazz – you name it. I just loved anything that could be played on guitar.

I started jamming with people and playing in a couple of bands almost immediately and was really into improvisation, first through blues, then bands like the Grateful Dead and then through jazz fusion.

I then met a kid in 10th grade whose father is a flamenco guitarist. This boy, who is still a friend of mine, had been learning flamenco from his dad since the age of five or so, and he actually showed me a few things. I was blown away, and at some point not long after, started taking some flamenco lessons with his dad. This led us to Spain, the following year, and then I started to get really hooked. When I graduated from high school I immediately went back to Spain for a year and that really sealed the deal for me.

Q: Fantastic! So here you are, learning flamenco in Spain. How did you go from there to the New England Conservatory experience and the Third Stream Studies department?

I started out a bit reluctantly going to music school. I really thought I should be in Spain. However, I did also want to go to college – which was also very important to my parents. My mom made the point that longer I waited the harder it would be to go back. I found out about the Third Stream (now called Contemporary Improvisation) program at NEC and it sounded like an incredibly good fit. Still, my first semester or so, I was still thinking about Spain. In my second year, though, I realized what an incredible opportunity it was and truly immersed myself in the process.

I started to appreciate the extremely high level of all the faculty – when I started to see how much I was progressing, I just took everything they said at face value. I wound up having a tremendous level of faith in the program and it was truly transformative. I developed some beautiful mentorship relationships there, and overall feel like it was indeed exactly what I needed.

The emphasis on the development of the ear and the pedagogy around developing your own personal sound was amazing. At the same time, there were such versatile and accomplished musicians both as students and faculty, and extremely diverse concerts available almost every day. I loved it.

Q: That sounds like such a beautiful experience! With all the playing you were doing, I understand that you experienced some physical issues, which led to the radical decision to relearn guitar from scratch. What was that like?

I would summarize by saying that it is the best thing that ever happened to me. I may write a book about it at some point. The injury revealed some very deeply rooted things, and the healing process for me had to occur on many levels, not just physical. There was an emotional component, in that I was very impatient and had some fears and doubts about my abilities.

I had to learn to come to terms with who I was and let the process unfold at its own pace instead of to try to force progress. I did all kinds of things including Alexander Technique, Yoga, Acupuncture, Shiatsu, and meditation – among many other things to help this healing process.

Tone and the ability to create all kinds of different sounds from the instrument started to evolve dramatically when I started to relax and release the tension.

Q: So many musicians quit before surmounting those kinds of issues. Your commitment is commendable, and I think your book would be very inspiring for other musicians in both preventing and healing injuries.

On another note, here you were, back and forth between the states and Spain. What was it like to study flamenco in Spain? How did it compare with your U.S. education?

My experience in Spain was fairly traditional. I would go to the teacher’s house, and he would show me the material. I basically memorized it note for note. Also, I would record the lessons, and go home and practice. Then, in the next lesson, I’d review and get any needed corrections and then learn another segment in the same way.

That is a great way to learn. So much about the music is transmitted from watching the teacher’s hands and body language, seeing and hearing his rhythmic feel, etc.

Terrific, Juanito! You’ve put so much attention on your learning process, and articulate it so well. We’re inspired by these lessons of patience and commitment, and staying open to learning through all our senses – and they have really paid off for you in your success. I’m looking forward to talking with you next time more about your music and your many current projects.

As musicians, we yearn for the ease, fluidity, and naturalness that oozes from Juanito’s playing. Yet his experience shows these seemingly magical qualities did not come without tenacity, persistence, and a willingness to even start from scratch if need be.