Home » Music Theory » Take Theory Into Your Own Hands: A Harmonic Journey

Take Theory Into Your Own Hands: A Harmonic Journey 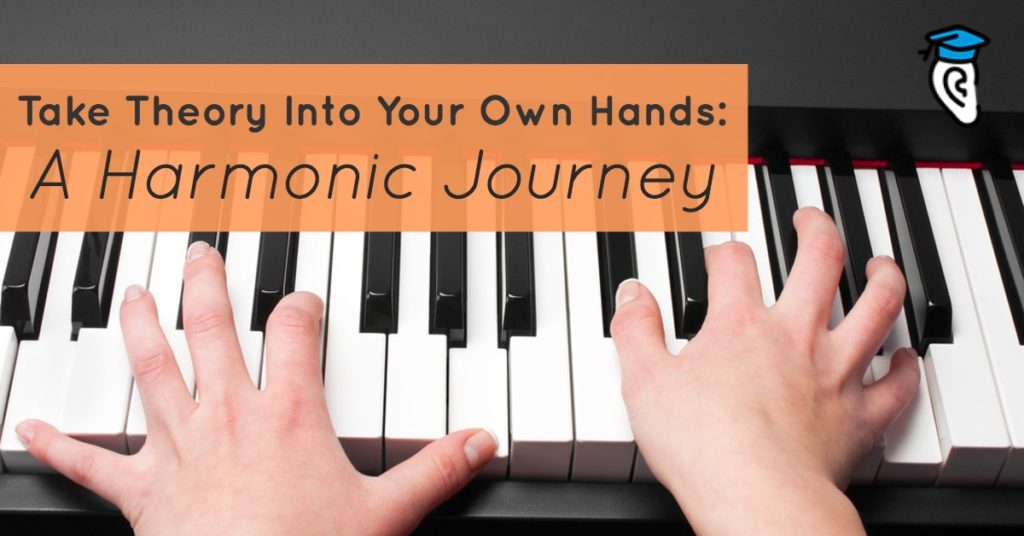 Five years old and I wanted to play guitar. Somehow my mom translated this into “piano”! Piano was the basis of everything music – at least that was her theory. I stuck with it, I practiced, and by the time I quit lessons in high school I could play one Chopin Prelude and the first part of Maple Leaf Rag really well. But it was a struggle, especially the sight reading.

So many notes, all on top of each other! Each time I came to a black stack of notes on the staff, I had to stop and read each note, one by one: bottom to top and top to bottom.

Approaching it this way, do you think I could remember from one day to the next what they all were? There followed much practicing over and over and over until I finally could play the stacks by rote, memorized so that I wouldn’t have to read them afresh each time. The Attack of the Black Stacks!

I took music theory classes and learned that those stacks were chords. I studied different kinds of chords and how they were made, but it didn’t transfer over to my piano practice.

Twenty years later I began to figure out why, and that’s what I want to share with you in this article.

The Scales Begin to Tilt

In the meantime I learned flute, and then saxophone. They made so much more sense to me! One note at a time, no more black stacks to puzzle over. I practiced my scales, and found that I could improvise – make up music as I went along! After a while I was able to find notes by ear that went well with what others were playing.

Now I also practiced scales on the piano. They helped my technique, and occasionally I could actually find a scale in a piece of music I was playing. I enjoyed improvising on the piano, even though my explorations usually sounded like the soundtrack to a horror movie. I couldn’t figure out how to make multiple notes sound good together.

Fast-forward: after 6 years of playing only records, I returned to playing instruments. In a couple of years I found myself touring with a reggae band. I heard songs in my head, but struggled to communicate my concepts to my bandmates. I decided to return to school to gain more understanding of chords.

I took music theory classes – lots of them. By the time I finished, I had a pretty good idea what chords were and what they sounded like. I could figure them out and give them fancy names, like A♭maj7♯11. But the process of actually using them fluidly in playing my instruments still eluded me…

For a little extra cash, I began to teach beginning piano lessons. I saw my students struggling with the same issues I had. One student at I time, I began to fill in the blanks.

One day, a student brought in a book that used shapes instead of standard music notation to represent how hand positions made chords on the keyboard. He easily learned 12 chords with this method at a very young age.

Here’s a piano chord tutorial based on this idea:

I finally began to figure out what was missing! I understood music theory with my head, my eyes, and even with my ears. But not with my hands!

As I sought to teach music theory to the hands of my students, I absorbed the lessons myself, and discovered I was now able to play piano with the kind of fluency that I had always missed.

Even my sight reading improved greatly, and I am now able to instantly translate the black stacks on the page into hand shapes. I can now sit down at the piano and make music that is pleasing to myself and others, entirely from my own head.

I always seek to be open to each student’s individual learning style, so after 26 years of teaching, on multiple instruments, I continue to create new diagrams, concepts, and videos according to individual goals. But my principle of success remains the same: take music theory into your own hands – literally!

Education specialists divide learning into different styles: auditory, visual, kinesthetic, analytic. I find that music students do best with a balance of all, but traditional music instruction puts more emphasis on visual and analytic. The kinesthetic style (feeling in the body) is what is most difficult to communicate in books or on audio-visual media.

No matter what instrument you play, even if you are a singer, you can learn to feel music theory with your body. Of course the specifics will vary according to the instrument.

One doesn’t have to be the loneliest number

Though I still consider my monophonic flute to be my “main” instrument, I have taught thousands of piano lessons over the last 26 years. When I began to really take theory into my own hands on the piano, my flute playing also improved dramatically. Chords are always in play, even in the way a single note moves to another single note.

It is therefore very beneficial to practice chords on monophonic instruments by playing one note after another. These are called arpeggios or broken chords.

For the monophonic player, being in touch with chords opens us up to deeper relationships with other musicians and with the music we love. Now that I understand why, dabbling just a little with piano or guitar can open up new worlds.

Three doesn’t have to be a crowd

Polyphonic instruments can play 3 or more tones at once. They organize their tones in different ways. The kinesthetic learning will take on different qualities according to the instrument. Piano assigns one key per note, but each guitar string can play many notes, and notes are duplicated on several strings.

Most guitar players start by learning chords kinesthetically as hand shapes. Since they tend to feel and hear the chord as a whole, their challenge is to then understand the anatomy of the chord and how to purposefully create new chords or new ways of playing chords.

Piano is usually the opposite: most piano students begin by learning single notes, and after a while (sometimes quite a while!) build those single notes into chords. So for pianists the challenge is to feel and hear the chord as a whole. 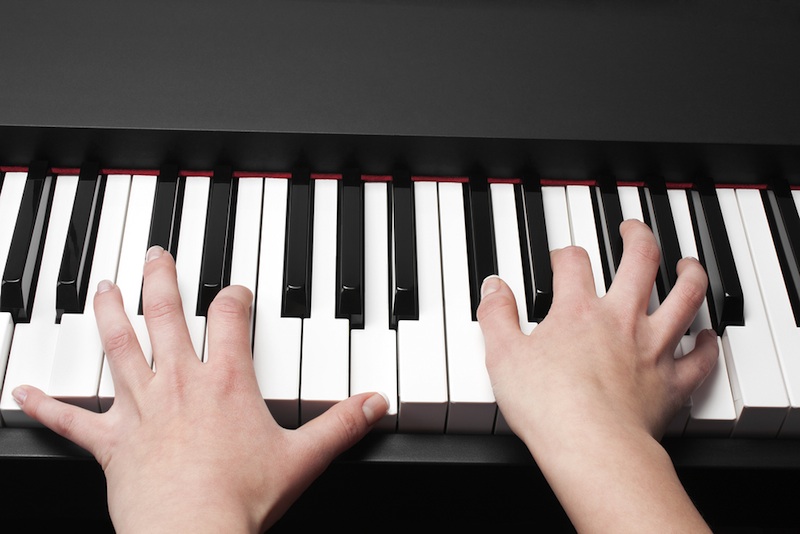 Feel Your Own Way

There are many online resources to learn what the chords are on your instrument. Paying attention to how they feel is the key to activating your kinesthetic learning.

Learn a chord, close your eyes. What does it feel like? How is your hand shaped, or what sequence of fingerings do you experience to produce a broken chord?

Learn another chord, compare with the first. How are they similar, how are they different? If you rely only on your eyes, your analysis, your learning, even your ears will be slower. Pay attention to how it feels. Put the chord in your hands.

Patient, slow, attentive practice is your best friend here. Soon new worlds of harmony will be literally at your fingertips!