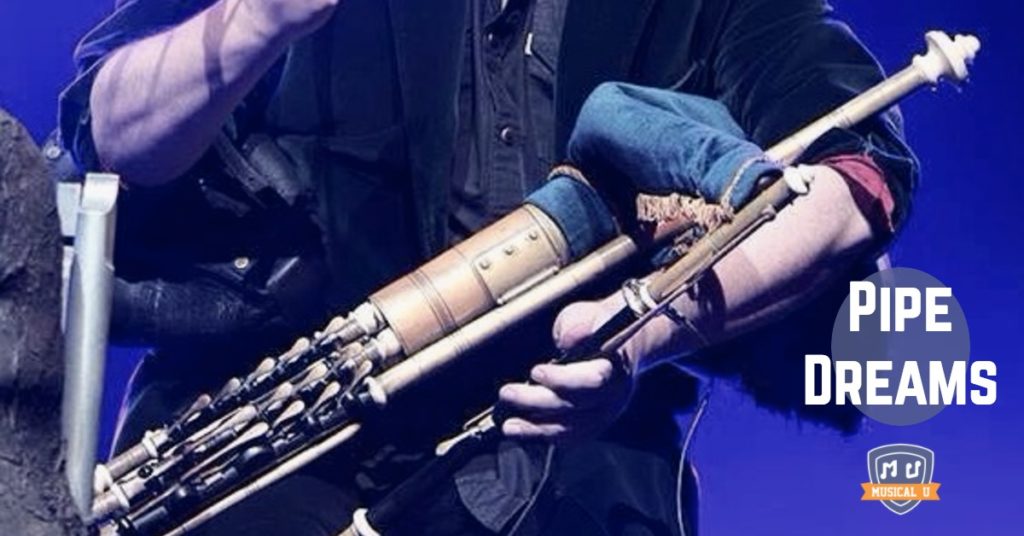 The haunting and expressive sound of a once-obscure Irish instrument – the Uilleann Pipes – have now been heard around the world in touring shows and film scores. Troy Donockley is a leading virtuoso and innovator on the pipes, as well as low whistle. His music can be heard in film, TV documentaries, and blockbuster movies such as Ridley Scott’s “Robin Hood” and “Ironclad”.

He is a member of the symphonic metal band Nightwish and he also co-founded the acclaimed group “The Bad Shepherds” with Adrian Edmondson. A formidable producer, composer, and multi-instrumentalist, he has recorded and toured with various artists such as Maddy Prior, Midge Ure, Barbara Dickson, Iona, Maire Brennan (Clannad), Alan Stivell, Mostly Autumn and many, many more.

Troy is known for both his affability and intense musical focus. He took some time off from his latest original projects to talk to us here at Musical U:

Q: Greetings, Troy and welcome to Musical U. We’ve been fascinated by your varied and unusual career. Where did this all come from? Tell us about your musical childhood. How did you begin with music and what were your influences?

I was born into a family of music lovers. My Dad had a country band which included my Mam as a singer, and it was there where I did my ‘apprenticeship’ (on bass guitar) at the age of 16.

But since I was a boy, I was given a wonderful musical education via my Dad’s taste and record collection, which was just amazing by any standard – progressive rock, country, classical, folk. Everything but jazz…

Q: While you play a number of instruments, you are most well known for the Uilleann pipes, which is notorious for being an extraordinarily difficult instrument. How did you first choose the pipes and learn to play them? Could you tell us about the process of creating the powerful expressive voice you have today?

I first heard the Pipes when I was a kid listening to Paddy Moloney of the Chieftains. I was besotted with the sound and always wanted to get my hands on a set but they were still a bit obscure and rare back then. But, a half-set turned up for sale in Cumbria and my Dad loaned me the money to buy them. That’s when the struggle began!

I have a particular kind of expression with the pipes but I have been told it’s the same across all of my instruments – I play the pipes like guitar, and vice versa. I was once criticised by a traditional piping music site for playing with “too much expression and emotion”. Great, eh?

Q: What would you say is your contribution to the legacy of Uilleann piping? What do you see is the future of the instrument?

Well a legacy is a big responsibility, but hopefully I have exposed the pipes to a whole new generation, from Yorkshire to Buenos Aires, who aren’t interested in the cultural cliches and illusions of the instrument and just like the sound of “too much expression and emotion”!

Q: Apart from the pipes you play several other instruments. How do you find these differ in terms of the listening skills required and the way you can express your musical ideas?

I have always approached music aurally and have learned everything by ear (though I do read and write music out of necessity) and I suppose that is the root of my direction.

Q: What is your attraction to Celtic music? What does Celtic music mean to you personally and professionally? 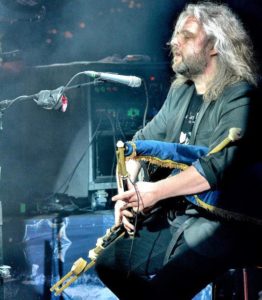 Well, there really is no such thing as “Celtic Music” or celtic anything for that matter. It’s a romantic notion and marketing device. What people are referring to is generally ‘Irish Music’ and I was very attracted to Irish music – its raw power hit me early on and I still love it.

But it’s the music of the British Isles that is the reality; the fusion, cross referencing and sharing of traditional music in these islands, through the ages. It’s an absolute treasure.

Q: Most of your career has straddled the traditional and rock worlds. Yet in whatever context you place yourself musically – from ambient compositions, film scores, and folk to symphonic rock, punk and pop – you manage to maintain a clear sense of authenticity. How do these come together for you?

That’s a very kind and splendid observation. It’s difficult to describe in words as it is a bit of a mystery to me. I suppose I try to be as musically free and unbound by what is expected of me as I can.

Q: How do you work with film scores? Are you working from written scores, composing your own melodies, adapting traditional melodies or improvising?

It’s a bit of all those techniques. That’s what I love about this work; it’s so varied and colourful.

Q: Tell us about your own project “The Madness of Crowds” and your compositional process.

“The Madness of Crowds” came about in the same manner as all of my music: I have to be utterly inspired to the point where I lose all sense of time. It’s difficult to sustain that state, so I keep the faucet tightly closed most of the time. Once I start work I leave everything behind until I return.

That particular album is my favourite and, as with the others, I can listen to it without any memory of making it, or having anything to do with it as a musician. I know that sounds weird but it’s true.

Q: You are highly sought after as a collaborator. In fact, you seem to have a pattern (with Iona and Nightwish at least) of beginning as a sideman and becoming a permanent band member. What advice do you have for other musicians in establishing and maintaining relationships with fellow musicians?

Years ago my mother used to say to me, she’d say, … “In this world, Elwood, you must be oh so smart or oh so pleasant.” Well, for years I was smart. I recommend pleasant. You may quote me.

Q: Great advice! Troy, you’ve spent your whole adult life as a working musician. What would you say to passionate musicians who have yet to cross over into the professional world?

It was the composer Gustav Holst who really clarified the road to a career in music. To paraphrase: “Only choose the life of a musician if the not being a musician is too painful.”

Q: What projects are you working on at the moment that you are most excited about?

I’m working on two projects at the moment but I can’t tell you anything about them because it will spoil the end of the story. Plus, the others involved would kill me!

Well, Troy, we would certainly not want to be the cause of your demise!

Thank you so much for “shutting off the faucet” for a while and spending some time with us at Musical U. Please keep us posted and let us know when we can hear more about those two mystery projects!

One of the characteristics of Troy that most inspires us is his determination to be himself, even when playing an instrument known for its powerful tradition. And then to take that gift into his generous collaborations with so many fine musicians. If you love Troy’s music as much as we do, you can find it on his website and all over YouTube. Whether you’re inspired to take up the Uillean pipes, or blaze your own expressive trail in music, take a lesson from Troy Donockley: focus intensely, and be pleasant.