Musicality Unleashed: The Two Things Most Music Education Is Missing 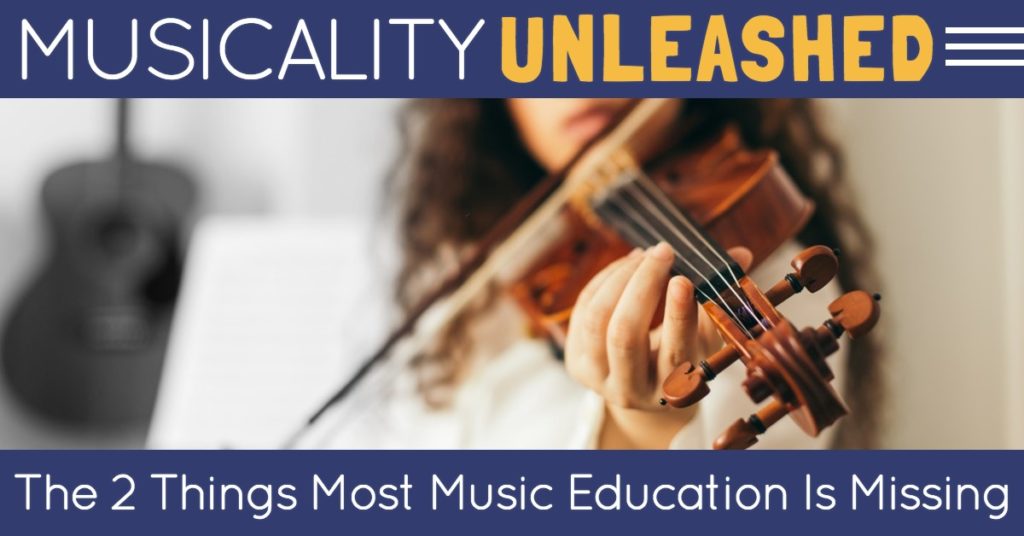 This episode is part of the Musicality Unleashed series. Learn more and get a bonus “cheat sheet” at musicalityunleashed.com. In this episode, we discuss the three aspects necessary for becoming a great musician – and how traditional music education often ignores two of them.

Most people think that learning an instrument will let them become a good musician – but that’s actually just one of three essential things you need to be doing.

Adding in the other two doesn’t take any more practice time and will transform the enjoyment and effectiveness of all your music learning.

If you’re someone who’s putting in the time and energy to learn an instrument it’s probably because you love music and you’ve dreamed of being free, confident and creative in music.

And if you have ended up feeling bored, frustrated or fed up with learning music, it’s not your fault. Traditional music education has failed you.

Although it promises to turn you into a great musician in fact it completely neglects to give you two of the three essential components of becoming musical.

We pick up an instrument full of our excitement and passion for music – but what we get often feels like dry, repetitive exercises or trying to train your body to perform like a robot.

What’s musical about that?

You’ve probably felt like “that’s just the way it is” and it’s easy to understand why – that’s what all the “authorities” tell you learning music looks like.

The reality is that this approach to learning music was born centuries ago for classical music – and it persists because the authorities want to make music an easy thing to set exams and test students in.

If you follow this path of learning an instrument you’ll inevitably get bored – because it’s not really a musical experience.

You’ll get frustrated – because you’ll always feel like something’s missing and it’s all harder than it should be.

And you’ll probably end up always feeling a bit inferior, like you just don’t have what it takes to be a great musician.

This system produces musicians who are nervous to perform and feel trapped, unable to play anything except what they’ve carefully learned, note-by-note from sheet music, tab or chord charts. Does that sound familiar?

If you step back and ask what really goes into becoming a good musician you’ll see that everything covered by the traditional instrument-learning system actually represents just ONE of THREE critical aspects.

The first is that instrument technique. It is important and valuable to get good at making an instrument do what you intend it to.

But what about understanding what you’re playing, or having the instinct to choose your own notes or way of playing?

The other two aspects are music theory – something that is quite often part of music education, but taught in a dry, abstract—and frankly boring—way, almost entirely separate from the instrument skills and what you’re actually passionate about in music. So it’s no surprise that most musicians find music theory boring or difficult, and so miss out on the amazing benefits and deep insights into what makes music tick that real music theory can deliver.

The third aspect is your musical ear. Again, “ear training” is sometimes a small part of traditional music education, but it’s a tiny amount, taught in a dry, abstract way which makes it boring and difficult for the student. And so we miss out on the amazing benefits that truly developing your musical ear can provide.

The result is that we’re learning to be good music-reproducing robots – instead of feeling true ownership of the music we love and play and feeling empowered to create and express our own musical ideas with the freedom that we imagined when we picked up our instrument in the first place.

Now if you’re like most musicians you’re probably thinking “I’ve got my hands full just doing the instrument bit!”. Where are you going to find the time for these other two areas too?

Well if you approach them right, taking on all three does not take three times as much time. In fact integrating the other two areas can actually accelerate your instrumental progress, so you can go further, faster, without needing extra practice time.

Because when you think about it, if being a great musician involves your brain, ears and instrument, surely the best way to learn music would develop all three of those together, right?

Discover what this looks like in the rest of the Musicality Unleashed series!