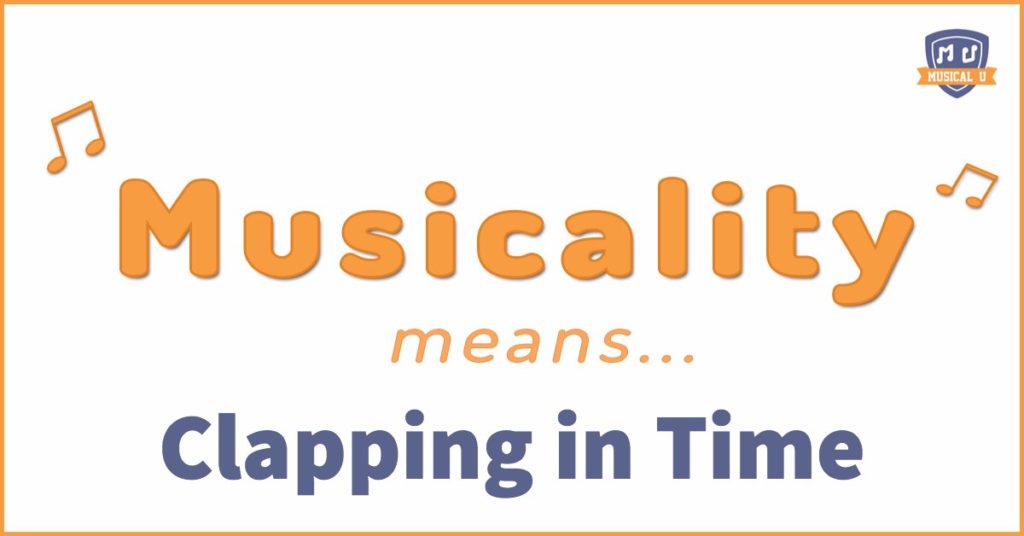 Have you ever been at a concert when the crowd claps along with the band playing? Maybe you noticed someone struggling to keep in time with everyone else. Maybe that someone was you?

Clapping in time with music is a fundamental part of being musical, yet even quite experienced musicians sometimes struggle with it. Music can be so varied and rhythms so sophisticated – yet sometimes even a simple 4/4 rock beat can throw us, when it comes to keeping in time.

So what exactly does it mean to “clap in time”, and why is it important for your musicality?

What clapping in time means

From an early age, humans are taught to clap along with music. It’s part of learning to dance and enjoy music as a listener, before real music education even begins.

To some, it comes naturally. To others, it always requires conscious effort to pay attention.

Clapping in time simply means that you clap at the right moments to be synchronised with the beat of the music.

In some cases that means clapping on each beat. For example in a 4/4 time signature that’s four steady claps in each bar, one on each of the four beats.

Clapping with a 4/4 beat

This is most common with something fast, folkie, and full of notes – like a reel or a jig. Here you’re clapping as part of the driving force of the music.

At a rock, pop, or country concert it’s far more likely that you (and the crowd around you) will clap slower than the overall beat – on just beats 2 and 4 of each bar.

So if clapping in time means being synchronised with the beat, what’s the alternative? Well, there are a few options:

Option 1: Being early or late

Sometimes a person will clap at the same tempo as the music but be slightly out of sync with the pulse. They might be consistently early or consistently late.

Clapping out of time with a 4/4 beat: Early

With luck they might sync up with a beat subdivision and it might come across as cool jazzy sophistication. More likely they’ll just sound a bit beat deaf and it will be off-putting to everyone around them.

A smaller problem is picking the wrong beats to clap on. Even if you find the beat, if you mistakenly clap “off beat”, meaning on 1 and 3 instead of 2 and 4 it’s a bit of a musical “faux pas”.

This is questionable because in most contemporary popular genres, beats 1 and 3 lead the rhythm, while 2 and 4 rhythmically answer 1 and 3. So when you clap on 1 and 3 it sounds like you’re trying to run the show – that’s the band’s job!

Technically you are clapping in time, and there might be a specific musical reason to do it. But unless you are starved for attention and relish the angry glares of your fellow audience members, sticking with 2 and 4 is your best bet.

This is the most common problem with clapping in time: continually missing the beat.

It can happen if you’re not musically trained or you’ve had too much to drink. Watch drunk rock fans at a gig and it’s most likely they can’t even maintain a steady beat like Option 1 above – instead they’ll be all over the place. Some claps arrive early, others late. It’s like they can’t hear the music and they’re just guessing where the beat should go.

Clapping out of time with a 4/4 beat

Option 4: Not clapping at all

Faced with Options 1-3, some people choose this fourth option: not clapping at all.

That’s fine if you’re at a rock concert. Even if the whole crowd is clapping along you can get away without it – just pump your hands in the air, or close your eyes and stand still like you’re completely blissed out. But as a musician you’ll feel guilty and a bit ashamed, and if it’s a more intimate situation like band practice you can’t really get away with it.

So why do you instinctively feel guilty about not being able to clap in time?

Why clapping in time matters

Rhythm drives music. It may be the melody that’s memorable and the harmony that moves us, but without that steady beat and the subtle expressions through rhythm, we won’t be tapping our feet or feeling the groove that gets us excited.

Fundamental to rhythm is the pulse: the steady tick, tick, tick of the musical beat. Without this pulse, rhythmic patterns become abstract and meaningless. Without hearing the pulse, you can’t tune in to how the music is moving forwards.

Like being able to sing back a note you hear, being able to clap in time isn’t just about making a sound – it’s about demonstrating that you heard what you should in the music.

If you can’t clap confidently in time with the beat there’s a high likelihood that you aren’t actually aware of the pulse in a clear and accurate way.

Yes, there is a physical aspect to it: coordinating your hands to move at the right moment, with precision and consistency. But more often the challenge of clapping in time comes from your inner sense of rhythm not being tightly attuned to the pulse, so that even with perfect motor control you wouldn’t be able to clap in time.

So clapping in time matters not because you’re going to need to literally do it. Those concert situations can be unnerving, but they don’t really matter. And outside of music lessons and instrument exams, it’s rare for you to actually need to clap along with the beat in your musical life.

Being able to clap in time actually matters because learning to do it forces you to develop a strong reliable sense of the pulse – and all your rhythm skills are built on top of that.

Learning to clap in time does help you to avoid embarrassing situations like clapping off beat or being too nervous to clap at all, but more importantly it helps you gain a rock-solid ability to lock in with the pulse of music, and so perform your own parts in sync. How you can learn to clap in time

The first step in learning to clap in time with music is to put aside any shame you feel about struggling with it. Want to know an insiders secret? Even experienced musicians can struggle with it!

It’s like being able to match pitch with your singing voice: as a musician you should be able to do it, because not being able to do it is such a hallmark of people who lack musical skill. Seeing someone sing out of tune or clap out of time with the beat, you assume they’re not musical.

You’ve worked hard at learning music – so don’t let people make that assumption about you!

How can something so seemingly simple cause even experienced musicians to struggle?

There are two parts to clapping in time with music:

If you haven’t developed your sense of rhythm or you lack musical training then you probably struggle with the first of these, hearing the pulse. This is why clapping out of time makes you seem so unmusical.

However, let’s say you can play an instrument and keep time with a metronome or with a band. If you still struggle to clap in time then it’s not actually #1 which is your challenge.

Even if you can clearly and reliably hear the pulse in music, you might have difficulty clapping in time because you simply haven’t practiced it lately! We learn it as children, but as mentioned above it’s actually relatively rare to have to do it in your real musical life.

For that reason, when it does come time to clap along, many musicians find it’s actually harder than they expect. Particularly when surrounded by people who are clapping on 1 and 3 instead of 2 and 4, or who’ve had a drink and are a bit off the beat. Sometimes it’s a wonder that anyone can stay tightly focused on the true pulse and to move their hands to come together at just the right moment.

It sounds almost silly, because clapping is so simple, and we see children clap along with music fairly well! Yet the reality is that even experienced musicians sometimes struggle to follow the pulse or get their hands coordinated right.

So don’t feel embarrassed. Figure out whether you struggle more with part one or part two of this skill, and then take steps to improve it and so learn to clap in time.

How Musical U helps you learn to clap in time At Musical U we have a range of training modules dedicated to rhythm skills. In fact there is a whole “Get Rhythm” Roadmap which teaches you core rhythm skills, from following the beat, to reading and writing rhythm notation, and understanding the part rhythm plays in defining musical styles and genres.

With the modules inside Musical U you can learn to reliably pick out the pulse in a range of rhythmic patterns at varying tempos, so that part one of this skill (having a clear and reliable sense of the pulse) comes instinctively, even with challenging musical situations. The training modules include training MP3s for you to practice with, along with additional exercises you can use which include clapping along. You learn to clap the pulse and to clap rhythm patterns in sync with the pulse.

Ultimately, learning to clap in time is a matter of practicing the two parts of the skill: tuning in to the pulse, and coordinating your hands to clap in sync with the pulse you’ve heard. Musical U can help you with each of these two parts, and then to go beyond it to build a natural and versatile sense of rhythm.

There are certain musical skills which can instantly mark you out as musical or not. Clapping in time is one of them.

If you’ve dedicated time and energy to learning music but still feel nervous when the occasion calls for you to clap along with a song, don’t tolerate it any longer.

If you can’t nod your head, tap your foot, or clap along in sync with the beat of music, something’s wrong. But the good news is: it’s totally fixable.

With some musicality training like that offered inside Musical U you can quickly polish up your rhythm skills and learn to easily and reliably clap in time.

So even if you’ve felt like “No rhythm guy” in the video above, don’t worry – there is hope! Learn to clap in time and you will feel more musical than ever.